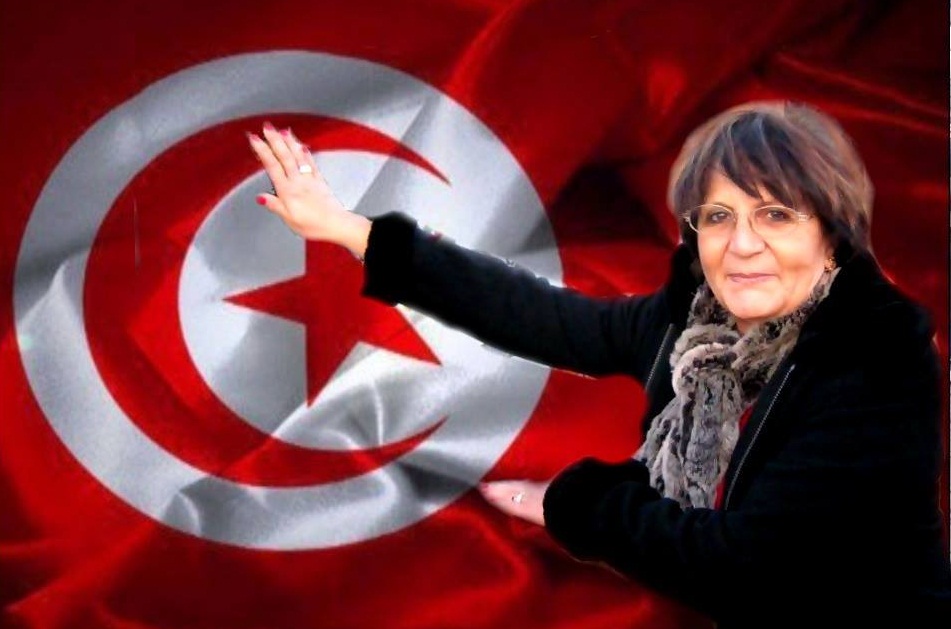 A mother for peace in Tunisia

Last New Year’s Eve, a suicide bombing in Istanbul left 40 dead, including the son and daughter-in-law of Tunisian peace activist and academic Khedija Arfaoui. She spoke to Aya Nader about peace in the Middle East and women’s pivotal role in change.

How did the loss of your son and daughter-in-law affect you?

The loss of my son and daughter-in-law has been like an earthquake. It is so hard to believe that my beloved children have disappeared forever. They were young, beautiful, in good health, and so loving and happy. They were so happy that their happiness was contagious. How is it possible that I won’t see them again? It is hard to believe such an atrocious reality.

I am in deep, very deep, mourning, but I remain faithful to my refusal to support the death penalty. I am against the death penalty. People ask me how I can possibly refuse to call for a death penalty sentence for the killer of my children. My answer is that only God should have the right of life and death. I am for real justice; criminals should be judged by a tribunal, and put in jail for their entire life. In the past, people would kill the person who murdered their loved ones. It was a common deed. We cannot act like people did in the past.

How long have you been in the fields of security, peace and policy?

I first focused on Mediterranean Security issues: particularly the problems between Algeria and Morocco over the Sahara, which prevented a union between the countries of the Maghreb. I have been a regular member of Near East South Asia Centre for Strategic Studies for a number of years. Other participants come from America, Egypt, Tunisia, Morocco, Algeria and also West Africa; they are from the army, foreign affairs, the national guard, security and from academia. We deal with the problems of terrorism in an effort to find solutions.

Tunisia was a very peaceful country before the 2011 revolution, but suddenly it has become violent, breeding terrorists that have killed and brought chaos and death. All this violence happened at the same time as the Islamists started winning elections. They invited Salafist preachers from abroad to give speeches all over the country, instilling hatred, telling young people to join jihad in order to go to Paradise, and presenting this as a religious duty. Islamist clothing for men and women appeared everywhere, along with rhetoric of hard-line religious beliefs. Cinemas, theatres and art galleries were attacked, mausoleums were burned down and people received death threats. Even the university was invaded by Salafists. It became increasingly important for me to join the fight against radicalisation.

What have been the highlights of your work?

As a scholar and feminist researcher, I wrote and was published in several publications. I have also written a book about women’s movements in the country from the past to the present. I co-wrote it with an American colleague, Dr. Jane D. Tchaicha, from Bentley University in Boston.

I have exchanged experiences with colleagues from my country and others in order to find strategies to combat youth extremism. One way to do that is to provide activities for them in art, literature, poetry, and sports. Salafists hate these pursuits, as their numerous attacks have shown.

How has extremism shifted in recent times?

The Ennahda political party, which is Tunisia’s version of the Muslim Brotherhood, played an important role in the early days of the 2011 revolution. They were the only unified and fully organised party which participated in the elections, and therefore they won. They were granted key positions in the government, where they gave freedom of action to a number of Salafists. Islamist kindergartens spread, with little girls wearing the hijab. Arrogant young bearded Salafists could be seen everywhere; they had a militia which started imposing rules, harassing women who were not wearing the hijab. The US embassy was attacked and the staff had to hide in a bunker.

At the time it was clear that, even though they were well-organised, they could not govern because they had no experience. Ultimately, they stepped down non-violently and agreed to a unity government. But they remain in parliament and occupy key governmental posts.

Their leader Rached Ghannouchi has stated that they have changed, and that they agree that there should be a separation between religion and the state. But we have documentation (in the form of videos and written documents) suggesting that their ultimate goal is to create a caliphate so we do not trust them. After promising that there would be no alliance with the Islamist party, President Beji Caied Essebsi suddenly started working with Ghannouchi. That was a big disappointment for all of those who had elected him. And this is the situation right now. We do not know where we are going, or why Ghannouchi pays visits to foreign heads of state when he has no position in government.

Can you describe the environment for civil society organisations in Tunisia?

Civil society has been playing a very important role since the 2011 revolution. Under Ben Ali’s dictatorship, there were very few autonomous organizations. There were only two women’s organizations and these were under constant scrutiny by Ben Ali’s police. After January 2011, NGOs were granted the right to work all over the country. With the help of the internet, Facebook and Twitter, NGOs were able to reach hundreds, maybe thousands, of supporters whenever our liberties were threatened. There were huge, spontaneous demonstrations in Tunis in particular, but also elsewhere in the country. When Islamists wanted to introduce an article in the constitution stating that women were not equal to men but instead were ‘complementary’, a huge march took place involving men and women. It was a complete success and the ‘complementary’ status they wanted to assign to women was removed from the constitution. It was also thanks to women activists that the notion of ‘parity’ was adopted in the elections lists. Each party had to have a man, followed by a woman in their lists. Most parties have complied with that.

How can women stand up to that, and why are women pivotal to fighting violence?

Women are fighting for peace all over the Middle East. They know that they have to take part in the struggle against violence. But they know that they will not be able to bring positive changes and end the chaos they live in if they are not given equal rights, if they are prevented from taking leadership positions, and if they are kept out of government. Women are pivotal to fighting violence because they are the first to be targeted. If they do not speak out for themselves, nothing will change. They have to assert themselves and reveal the discrimination they face. In Tunisia, half of all women are victims of marital violence. Women are victims of violence at home, in public, and at work. Unless violence is tackled, women will continue to suffer. However, patriarchies resist gender equality. The ideology of radical political Islamists is a particular impediment to social peace.

Why is education relevant to the fight for peace and against extremism?

In the period when Tunisia declared independence, very few girls went to school. They lived in a closed world, which they seldom left as their parents’ goal was marriage (or rather, finding a husband for them). President Habib Bourguiba was outraged by this. He said that there could be no development without the education of women. So, schools were built for men, and for women. Once women had an education, they felt they had a role to play, and they started by joining the existing, male-dominated political parties and participated in fighting colonialism. The same thing happened in Algeria, Egypt, and in other countries.

Women do not like wars. They do not want their fellow citizens to die. So, when women are educated they will play a major role in peace building.

How should peace activists work around non-democratic governments?