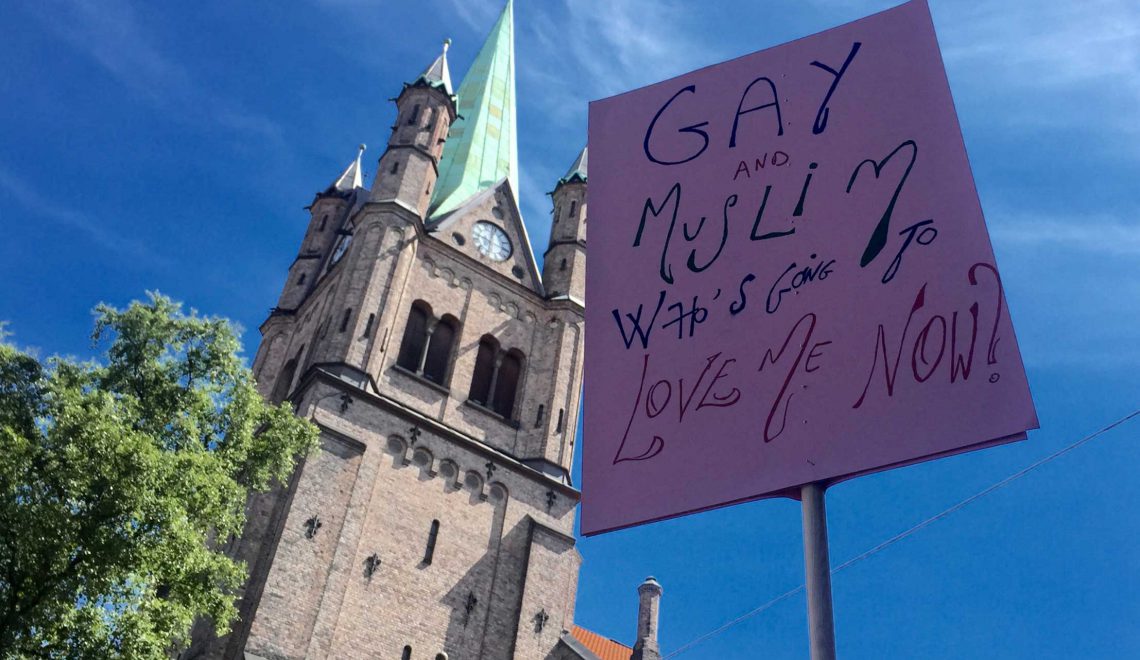 49 innocent human beings were killed by a gunman inside Pulse, a gay nightclub, in Orlando, USA. My thoughts and prayers are with the victims and their families. An incident like this infuriates me, but what’s even worse are some of the things I’ve heard Muslims in Norway say about the LGBTQ-community after the mass shootings.

The 25th June this year we had the joy of having the Pride parade in Oslo. Before this event a lot of Norwegian Muslims encouraged everyone to join the parade as a gesture to not only support the gay community but also to honour the people who lost their lives in Orlando. This made me so happy, even though the circumstances were sad.

However, this happiness didn’t last that long. I found out that some Muslims were reacting negatively to these gay friendly Muslims who were speaking their minds and talking compassionately about the gay parade in the media. In a closed group on Facebook for Pakistani Norwegians I witnessed people being more provoked about the fact that people were encouraging Muslims to join the parade in the middle of Ramadan, rather than being provoked by the mass killings themselves. They wrote comments like: ‘I condemn this’, ‘They should be ashamed of themselves’ and ‘What kind of idiot tells us to join the parade while it’s Ramadan?! What a sin!’

Being gay isn’t something you choose, and love is love no matter who you’re holding hands with. For me Ramadan is about appreciating what you have and what others might not be lucky enough to have, and it’s about self-reflection and compassion. Some people act as if they’re Allah and use Islam as an excuse to condemn gay people, but seem to forget that Islam also teaches us not do judge others. What’s the point of fasting day in and day out, if you’re wasting all your good deeds on badmouthing others and spreading hate on the internet?

If people didn’t want to join the parade, that would be totally fine, but what I had a hard time accepting was that people in this hateful Facebook group were saying horrible things, not only about the gay community but also the Muslims who were planning to walk side by side with their gay friends. Some would even write that there were other ways to show that they were thinking about what happened in Orlando, like praying for the victims, but when the same people were calling the parade disgusting, I couldn’t imagine them praying like hundreds of Muslims in New York did the day after the mass shootings.

I know that the internet trolls aren’t as many as it sometimes seems like, and I’m pretty sure that the majority of Muslims aren’t like the ones in that closed Facebook group. Yet it worries me that they even exist. On the other hand, there were Pakistani Norwegians in the group that were positive about joining the parade as well. People who were defending the LGBTQ-community and saying things like: ‘Yes, it’s Ramadan, but Islam is about peace and about caring, so let’s care!’ And I couldn’t agree more. Ramadan is a perfect opportunity to take a deep look into our hearts and confront our own prejudices. After all, Ramadan is the spring season for goodness for a reason.

Namra Saleem is a journalist, musician and an author. She has a soft spot for Punk Islam and thinks it´s important to fight for freedom and to speak up when wrong is being done.