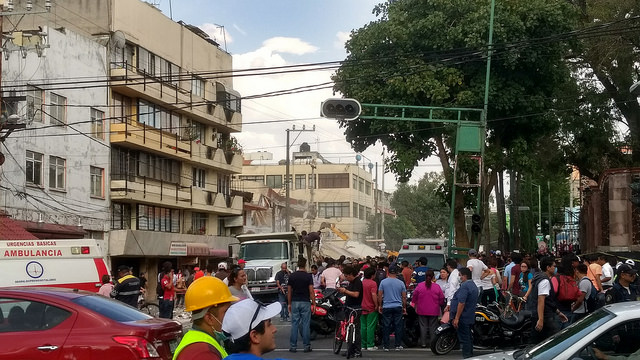 It may seem odd to some of you that words from Mexico may be relevant to this publication; and yet, they are.

I am a Mexican national, originally from Morocco. I have worked in many war torn places across the world, from Ethiopia to Iraq to Sierra Leone, and more.

Today, I am home in Mexico as it suffers the consequences of a high magnitude earthquake. I am witnessing how everyone is helping, contributing and volunteering.

And here the key word is ‘everyone’. This means men and women alike, working side by side, be they engineers, doctors or people distributing water and food to the rescuers, and opening their houses to all.

Now picture this image in your mind and apply it to some Muslim areas of the world. What do you see? Only half of the people.

Men refusing to work with women, women fully covered impeding their active participation in removing fallen debris and asked to stay away, and others yet refusing to be treated or touched by male doctors (or their families impeding it), and more.

I may be portraying an extreme picture, but it is not far fetched.

I remember working in Saada in the north of Yemen. A few hundred displaced persons had reached the outskirts of town. They had walked more than 50 km in the desert. As we set up a temporary camp for them, I asked the leader of the group if there were any woman who needed medical attention (my aim was also to have access to children under five years old who tend to remain by their mother’s side).

The man simply said there were none. A medical tent had been set up and many men and older children had been treated, most suffering from dehydration and fatigue. By simple logic, it was obvious that some women and smaller children would also be suffering after such a long journey in the heat, and even more so when dressed in a black niqab made of 100% polyester and gloves.

It took me some time to convince the gentleman to let the women receive a medical check up, made worse by the fact that the only doctor at hand was a man. Finally, he agreed as I promised that I would be there at all times.

The whole process was in many ways ludicrous to say the least, with some women covering their faces yet uncovering their legs. Aside from that, some infants were in very bad shape and had to be treated for severe dehydration.

So what I wrote earlier about having the picture half empty of people is not completely unreasonable.

I worked in Iraq in 2005-2006 and I know that women, no matter how covered, can participate actively in disaster situations. The same is true in Iran as during the 2003 Bam earthquake, and today in the north of Nigeria. Women are full participants and no one is excluded.

So I am not talking about all areas, only specific ones, and I am afraid for areas that are expanding because of a change in people’s mentality towards more conservative thinking. And it is happening from Morocco to Indonesia and beyond.

More and more, women are kept away and worse yet, many are not being treated adequately. Increased conservatism is de facto keeping them from receiving medical care from male doctors, who remain the majority in the medical field. Consequently, it is keeping away children five years and under from proper medical attention in emergency situations.

So when some ask for a dress code such as the niqab or the burka to be respected, or when others insist on a physical separation between men and women no matter the circumstance, you may understand my unease. And what baffles me most is when women actually ask for it, especially as they may be the most aggrieved when a major disaster strikes, whether it be from natural causes such as an earthquake, or war.

It is time to start seeing all these restrictions for what they are. They segregate and worse yet, they place more people in danger, since less people can actually participate in rescues and/or receive immediate assistance when disaster strikes.

These ideas are not new for me. But what I am witnessing in Mexico has finally helped me gather the strength to actually write them down. We are all humans, we all deserve help and assistance, and we all deserve to participate actively in all walks of life no matter what.