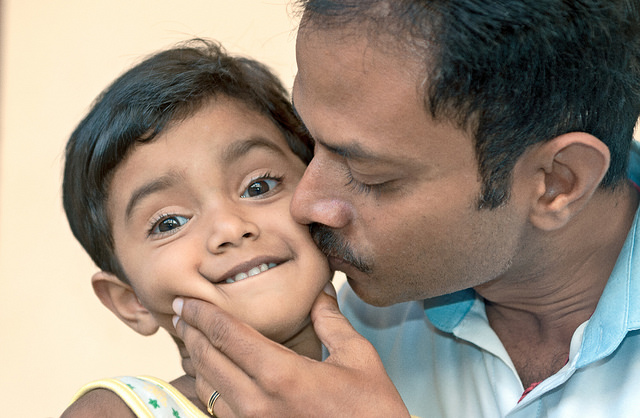 My father made me a feminist

My father probably doesn’t know what the word feminism means. He has possibly never heard of it. My father is a Pakistani man who grew up in the 70s. His school had no tables or chairs, so students would sit on the floor and write on slates. It was a state-run school with limited funding. The teachers were under-paid and wouldn’t show up most days. He was one of six siblings. Finances weren’t easy. When he was growing up, he didn’t have a television and would watch whatever he could at his cousin’s house. He had never left the country until the age of 18. He didn’t know what an iced cappuccino was, as we found out one night when he was out with my mom and she asked for one.

My father showed his affection openly towards my mother and his daughters. He still slathers us with kisses. He always backed my mother’s career and her pursuit of higher education. On days when my mother was away on a work trip, my father would have our breakfast and school uniforms ready. Whenever we got dressed up he would pretend to faint and say, ‘What is the secret of your beauty?’ Relatives would often ask my parents why they didn’t try and have a son after having three daughters. My father would say, ‘If I ever had another child, I would want a daughter.’

My sisters and I pretty much grew up gender agnostic. We genuinely never saw toys as gender split, nor were we ever held back from an activity because we were girls. We had trucks and trains and barbies and planes and kitchen sets. We had bicycles and cricket kits and make up kits and skipping ropes. We had chores like washing the car, helping mother cut up vegetables and bhag kar dukan roti le ana [run to the shop and buy bread]. We learnt taekwando, drumming, swimming, stitching and painting.

When we grew up, my father insisted that we went to the best schools and universities that my parents could afford. Two memories that will always stand out for me are: my father exercising to look good in his suit at my graduation, and my father kissing my first business card and keeping it in his wallet. On days when I got last minute tasks at work my father would wait in the car for hours till I was done. My father was delighted when I travelled alone to the USA at the age of 16 for a Model United Nations in Washington, and on a religious pilgrimage to Najaf and likewise for my post-grad in Sydney.

My father detests desi rishta [marriage proposal] culture. He was firmly against his daughters’ pictures being circulated to families to pass judgement or for his daughters to be paraded in front of potential suitors and their families with trays of chai. He always told me that when I was old and wise enough and liked someone for the purpose of getting married, I could tell him and my mother. Which ended up being what I did. I had their full support. I will never be able to thank God enough for not being raised by an authoritarian man.

Despite extremely limited resources when he was growing up and a tough childhood, he has an extremely open mind and sound knowledge of almost any topic I have ever talked to him about. My father wasn’t necessarily trying to raise us as revolutionary beings. He was simply giving us the best shot we could get at the one life we have. Maybe feminist fatherhood isn’t always marching in a women’s rally. Maybe it is about never seeing gender as an obstacle for your daughters, giving them the best education and future, and pushing them to be confident and independent individuals in their own right.

A Pakistani living in the United Arab Emirates who is always thinking about travel, plant-based food, theology, gender, poetry or cats instead of working on deadlines. A part time sock collector and a full time girl power proponent.