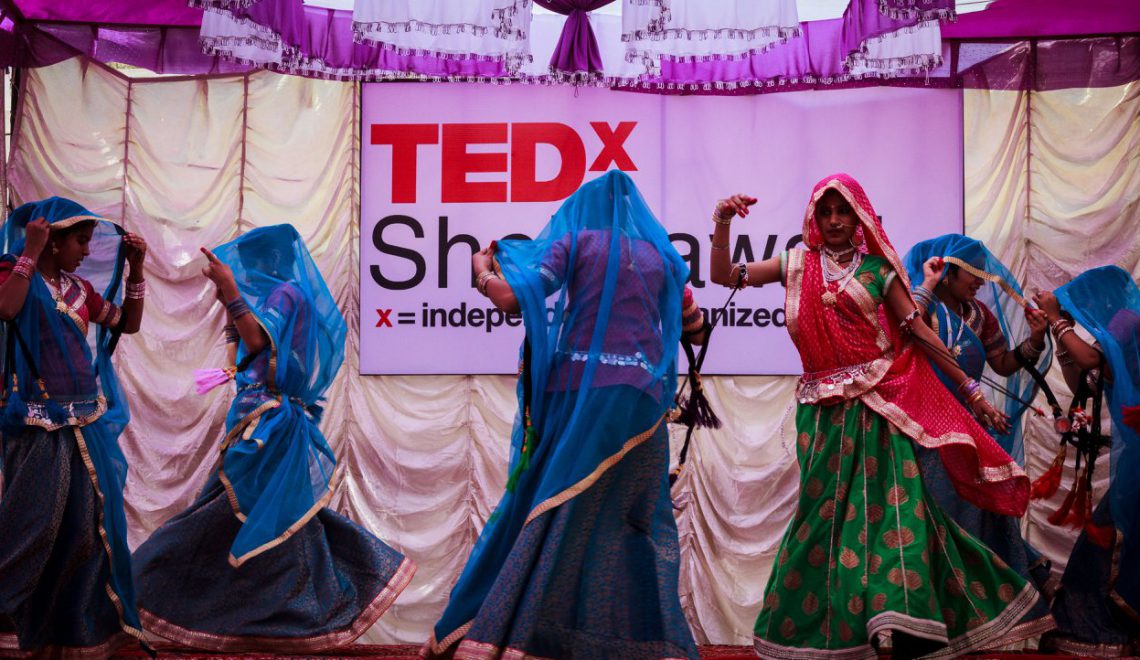 ‘It is commendable that you are organising this, but… women will not show up.’

‘Well, it is so far. And what do women have to do with hearing new ideas?’

I have been working on TEDxShekhawati, Rajasthan’s first TEDx event and India’s largest TEDx, for months. At first, I had worked remotely from London before arriving in Fatehpur Shekhawati, Rajasthan, in India a week before the event. Taking care of the venue design, sound and video were the easier part of my preparations. The main piece of work was designing a campaign strategy. Whilst TED is known in urban areas, this would not be enough to attract audiences in Shekhawati. We had to explain what TED is, and why they should attend.

One of the common complaints about the region is that parents don’t care about their children’s education. In designing the campaign strategy, I decided that we would have to explain the event to the children – and ask them to bring their parents! Through Facebook, we developed a strategy to target people within their homes. I gathered a team of men and women. Leaflets were printed in Hindi which explained what the event was, what the speakers were going to talk about and why I was organising it. Within a day of starting this grassroots campaign, we realised that we had to target women specifically. The general pamphlet about TED and TEDxShekhawati was assumed to be something that would only interest men.

Within a day, I had written new pamphlets, and had them translated into Urdu, the language spoken by most Muslim women, and the volunteers had taken these to houses where they explained what this programme was. I also made a short video with the intentionally-provocative title ‘What’s the point in having women at TEDxShekhawati.’ Official Facebook views of this video exceeded 16,000. The event also circulated in the informal social media economy via WhatsApp.

By 24th Feb 2018, there wasn’t a person left who had not heard of TEDxShekhawati through leaflets, volunteer outreach or the Facebook video. I took charge of the schools campaign where I travelled within many Shekhawati towns and villages explaining TED/TEDx to thousands of children, specifically mentioning that their role was to go to their parents and explain this to them and to bring them along on the 24th. The campaign intensified — women in salons were given leaflets and explained what was going to happen at TEDxShekhawati. We engaged with people on the streets, in shops, in their homes and in their schools.

The day of the event is the most gut-churning feeling. You never know how many will turn up. What happened next stunned us all: women came in droves! All the speakers expressed surprise and said that they had never addressed such a large crowd of Muslim women in burqa and niqab. These women shattered the false belief that women were uninterested in hearing new ideas, and that women, especially Muslim women, did not care about change.

The story of TEDxShekhawati is one of overcoming expected and unexpected obstacles. It was a self-funded event, worked on single-handedly by myself. A week before, I had recruited a team on ground to help with the execution of the event. While there were the usual suspects who claimed that an event like this ‘where men and women freely mingled’ was against religion and should therefore be boycotted, upon this occasion, the faux-feminists came out of the woodwork.

I was approached by a group of young men seemingly motivated and driven towards social change. They claimed to be supporters of women’s education and emancipation and eagerly volunteered. I was pleased at this encouraging sign since I have dealt with tough resistance in the past. For a grand total of two days, this group helped out in campaigning work. However, this effort turned out to be the prelude to sabotage. They only wanted to be surrounded by the ‘chief guests’ and take selfies with them. They insisted on having their banner placed on the stage. They were assigned duties which none of them did; instead of crowd-control, they tried to disrupt the event. They also kept trying to pressurise me. When none of this worked, they activated a vicious WhatsApp campaign claiming that the TEDxShekhawati event was against Islamic values, and should be boycotted. More than a week after the event, they are still creating propaganda messages for SocMed trying to belittle this mammoth effort.

When I discussed this with one speaker, he said it wasn’t a surprise. I continue to be deeply disappointed that young men, who I had hoped would shape our future society are instead part of its deep rot. Men like these tried to talk over me, refused to listen to my requests, took my momentary silences while I made notes as a sign that I didn’t understand what they said and that they had to ‘simplify’ it for me, and spoke to my father instead of me; only to be guided by my father that the event was solely organised by me and he was ‘working to my instructions’. These men say that they ‘made’ their wives study, awarding themselves the badge of honour for their wives’ efforts. Even our empowerment and hard work must always be owed to them, for granting their permission. This deep-rooted idea of male superiority always finds its way out, even with the best efforts at disguising it as male feminism. It is also telling that these men were the ones who decided that there was no need to bring women into the TEDx event. These faux-feminists wanted to dictate to women what they thought was important and for women to act upon their decisions without using their own intellectual agency.

Soon after the event, I received numerous messages from many types of people. Children telling me that they now feel that they have a new career option, such as robotics, and asking me how to plan their studies around it; men talking to me about patriarchy and being surprised at how unaware they were of the deep societal framework; women telling me that they wanted the event to be longer, and explaining why they liked one or other of the speakers.

I was explaining what a robot/humanoid is to two women. They knew nothing about AI or the global discourse around it. In a few minutes, one woman asked me: ‘If robots will do what humans do, then unemployment will increase. What will humans do?’ and then she was disrupted by the second woman who said, ‘The bigger question is that if robots eventually do everything, who should we listen to: men or robots?’ To me, this was fascinating. Without being part of the global discourse, within a few minutes, these women had produced an economic question around AI and the second person spoke of the cultural implications of AI.

I am persistent in my pragmatism, and truly believe that as long as this platform is available, there will be a big change. No one (including myself) can predict what this change will look like, but it is for the visionaries to believe in – and for the saboteurs to attempt to negate. Here’s to those 7,000 people who turned up for TEDxShekhawati 2018. Here’s to those thousands of women who entered this space for the first time. Here’s to the undying belief in the power of ideas. 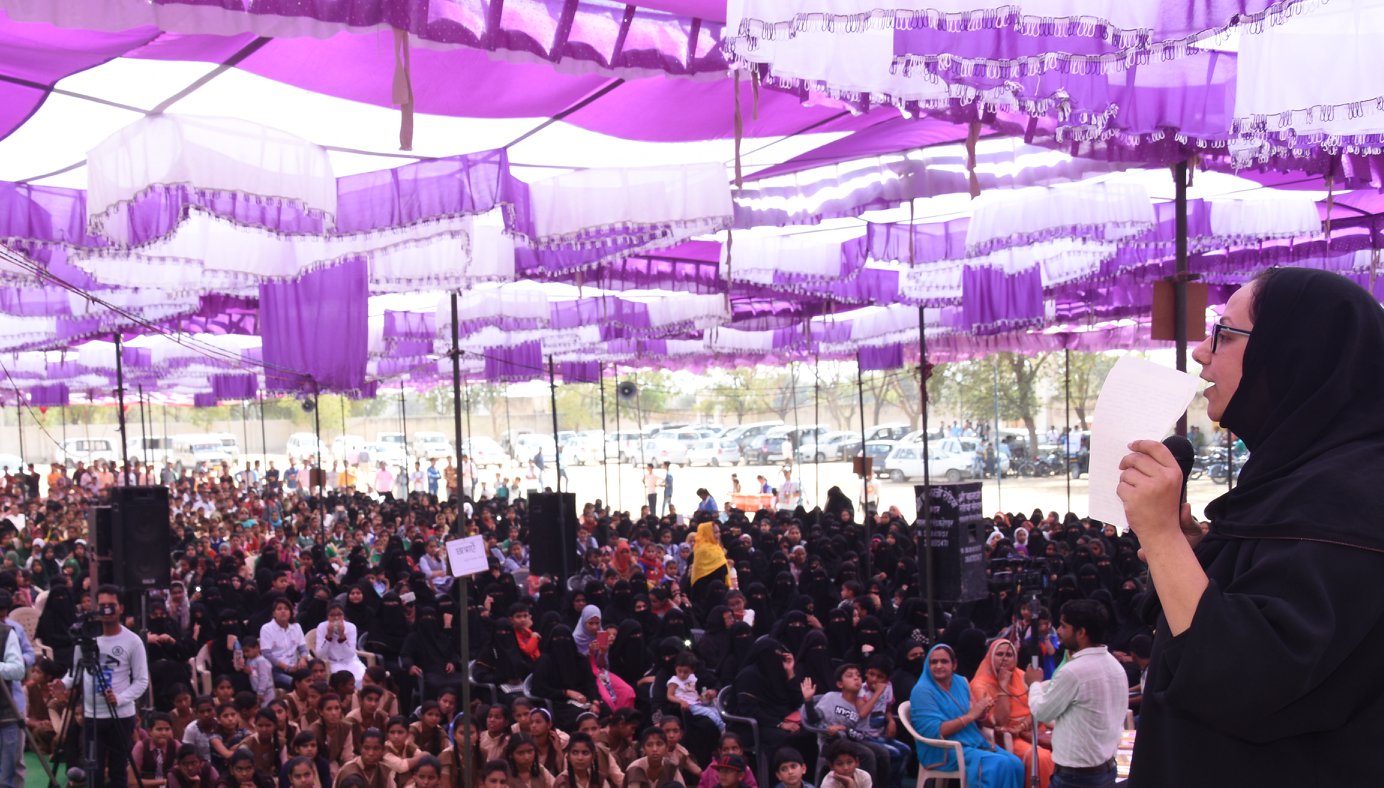