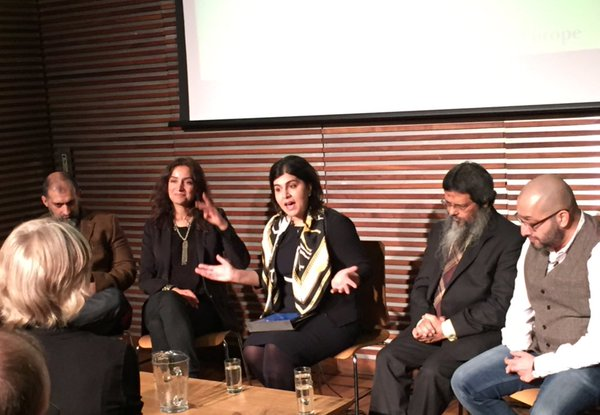 Conversation: Jihad– A Story of the Others

Screening at Free Word Centre as part of Unravelling Europe

Deeyah Khan, EMMY award winning Norwegian-Pakistani filmmaker who made Banaz a love story – a powerful story of the honor killing of Banaz by her own family, returns to the screen with JIHAD, a documentary looking at the roots of extremism in Britain and Europe.  In this film we discover the human side of radicalisation, something you don’t really see in the media – especially in the current climate. Deeyah sets off on her own journey, the very people that threatened her during her singing career and drove her to leave Norway –Muslims who joined extremist Islamist groups, being trained for the War against the West,. We meet Abu Muntasir, Alyas Karmani, Munir Zamir and Yasmin Mulbocus, who are now painfully aware that their vulnerabilities were exploited to introduce them into this world.

Abu Muntasir nicknamed the ‘Godfather of Jihad’, is now an imam in Ipswich and does interfaith work. Alyas, Munir and Yasmin work with schools, share their experience of leaving extremist groups. It becomes clear is that some young Muslims are treated as outsiders, and some find belonging and comfort in extremist groups like ISIS. Alyas works closely with young Muslims in Bradford and says openly that he meets young Muslim boys, who are sexually frustrated due to the culture of gender segregation, and think picking up a gun will make them more masculine and get the girls flocking. Munir Zamir mentions that him having a disability filled him with a lot of hate. Yasmin was sexually assaulted when she was younger, and found acceptance in an extremist group after she was failed by the British Judicial system.

All these people come to the same conclusion: that they wanted love and acceptance.

For me the most powerful and moving part of the film was when Abu Muntasir broke down when asked can he forgive himself.

The Q&A reflected that a dialogue urgently needs to be established with Muslim youth. Deeyah said ‘We talk about the youth, but not to them.’

This seems to be the missing link that Government can’t grasp. This should have been the first port of call: to communicate with the youth and give them a platform. Interestingly, recently a group of four Muslim playwrights, myself included, had a meeting to discuss what would be the best response to the Paris attacks last November from a Muslim perspective. Again engaging with the youth and going into schools was mentioned time and time again.