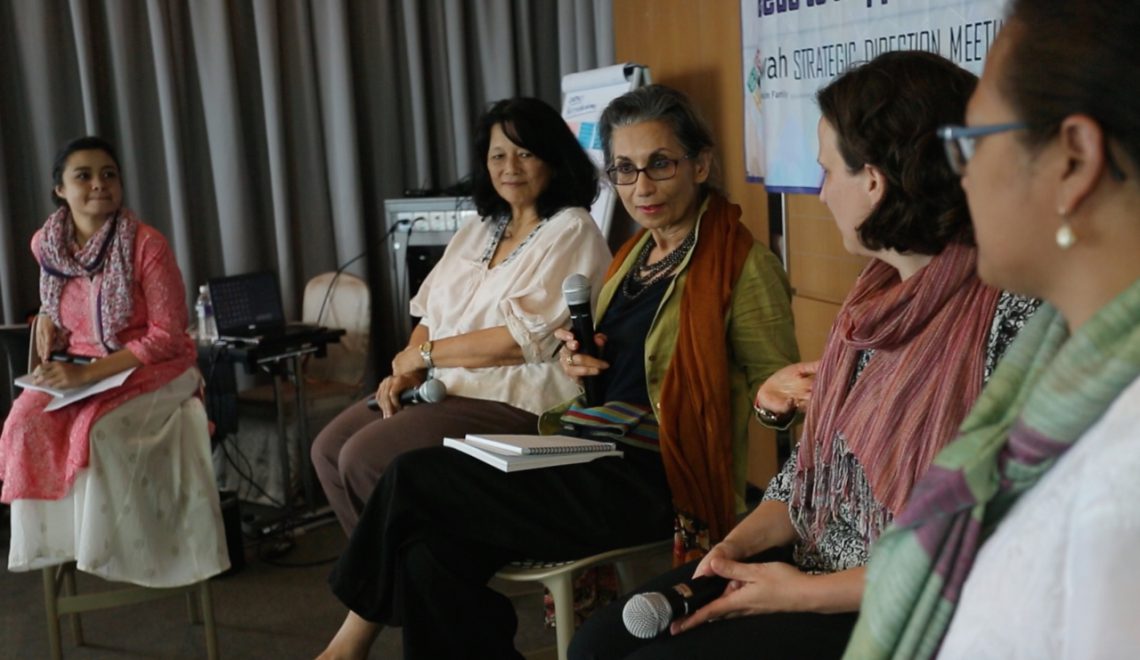 “God cannot be God if God is unjust”

Through scholarship and activism, Musawah, the global movement for equality and justice in the Muslim family, is challenging the patriarchal monopoly on the interpretation of the sacred texts of Islam to claim back the Qur’anic values of justice, fairness and equality and emphasize the temporality of law.

Suri: How did the idea of Musawah come about?

Ziba: I think it was in early 2000.  I came to Malaysia for a workshop that Zainah organized. I was working on Islam and feminism but it was the first time that I was out of the Middle Eastern/Iranian/Turkish contexts. I really felt at home here because there was no tension between the secular and religious approaches. There was open-mindedness. It was at that time that the idea of Musawah came into existence. As an academic, I felt that the old way of approaching inequality and injustice for women needed to change. I was inspired by a new type of activism – working from within religion. Sisters in Islam was the only group that I had come across throughout my research that was both feminist, in its true sense, and at the same time religious, combining these two frameworks together. That was the beginning of the idea.

Zainah: In 2003, Sisters in Islam organized a meeting on the impact of Islamic extremism on women’s rights. We brought groups from South East Asia and the Arab world together in a meeting where we talked about the legal, social and educational impacts of extremism. As women, we were all suffering from extremism and had been impacted by it. And yet so many women’s groups in Muslim countries were not grappling with the issue head-on. We thought that needed to change. We were very inspired by what had happened in Morocco, how the personal status law was introduced in 2004 based on the framework of equality and justice and that marriage is a partnership of equals. We thought, if Morocco can do this, why can’t we? It was then that we decided that there was a need to bring, in one big international meeting, women’s groups that have been working on family law reform for decades, facing so much resistance from governments, from Islamic activists and from religious authorities. We needed to bring everyone together to really strategize how to push this forward.

Suri: Why is Musawah a movement as opposed to, say a network?

Zainah: I think one major reason is that we see ourselves as a movement of ideas, a movement of knowledge. We looked at the Violence Against Women movement, and how they came out with a feminist analysis of why violence against women happens, what are the principles needed in the law if you want to criminalize domestic violence, what are the principles for providing shelter services. Nobody really owns that movement. All that scholarship is being produced, but it is really up to activists on the ground to decide how they would want to use it. So we looked at the VAW movement as a model and decided we wanted to produce the knowledge, the analyses, the strategies regarding how we build an alternative discourse on equality and justice in Islam and how we push for law reform: the arguments that make change possible.

We wanted to develop that body of scholarship and we felt that in the end, it’s really up to groups at the national level to decide how they want to use our scholarship, the strategies we share at national levels.

Rozana: There was a concerted effort to ensure that the agenda on the ground, at the national level is led by local groups, not us. They are the ones working on law reform, while we help to support their efforts with knowledge, resources and strategies that might be relevant to their efforts.

Jana: One last thing to add is that the first two years, from 2007 until the launch in 2009, were about principles and values. Our Framework for Action was originally called Declaration of Principles. There were intense discussions about how we formulated those values and principles so that they could be universal but then still apply to the different contexts. And I think that’s actually one of the things that Musawah, throughout the years, has continued to work on.

Suri: Musawah in 2009 launched explosive debates for secular and religious feminists. How did that come about and how did you reach a consensus on it?

Zainah: Sisters in Islam had always been a group that bridged the gap between Islam and human rights. We didn’t see any contradictions. We saw the possibility of engaging with religion to push for change. As Muslims living in a country where Islam is a source of law, public policy and practice, how can we not engage with religion when it is used to discriminate and oppress us? How can we just ignore it and leave it to the religious authorities and the Islamists to define what Islam is and what it’s not?

This global movement we wanted to create then was really about bridging the divide which didn’t exist in Southeast Asia, but was very much present in the Arab world and in South Asia. We wanted to exist because first of all, there is this gap of knowledge, on understanding Islam from a rights’ framework, and second, the gap of knowledge among secular feminists and human rights activists in terms of engaging with religion.

We wanted to bridge that binary that we feel is deliberately constructed to keep us – secular and religious feminists – apart instead of bringing us together.

Suri: What would you say are the key achievements of Musawah?

Rozana: I think we’ve come a long way with very limited resources and with a lot of borrowed time as well. People involved had so many more commitments, yet they gave a lot of themselves to the process, to producing the outputs and to carrying out the work. It is so wonderful to be able to be here today and to see how we can take it forward.

Ziba: One main achievement is that we are still here, talking to each other, and growing. I personally think that Musawah has really been a source of inspiration for many people. It is the first group of women that came together both as scholars and as activists. Musawah also values the knowledge that is produced by women. Most importantly we developed a methodology. We have a clear idea of where we want to go but at the same time, we are open to change.

Jana: I think one of the key achievements in my mind is not necessarily related to outputs or activities or anything, but just the fact that Musawah has been so grounded in values for its whole existence, and that in being a knowledge building movement, we are not prioritizing only the scholars among us, who we respect and are grateful for, but also the knowledge of people and their experiences.

Zainah: I am proud of the passion that everybody in Musawah has. I am proud of the alignment in values between what Musawah stands for and the values that our staff hold, because it’s not a job, it’s a mission where you know the risks, the attacks, the fact that you are going to be demonized and yet still be willing to do it. This is our resistance to oppressive patriarchy, misogyny, and the use of God and religion to keep us down. So, no matter what the risks are, something has to happen and we are willing to make it happen.

Musawah is a global movement for equality and justice in the Muslim family.