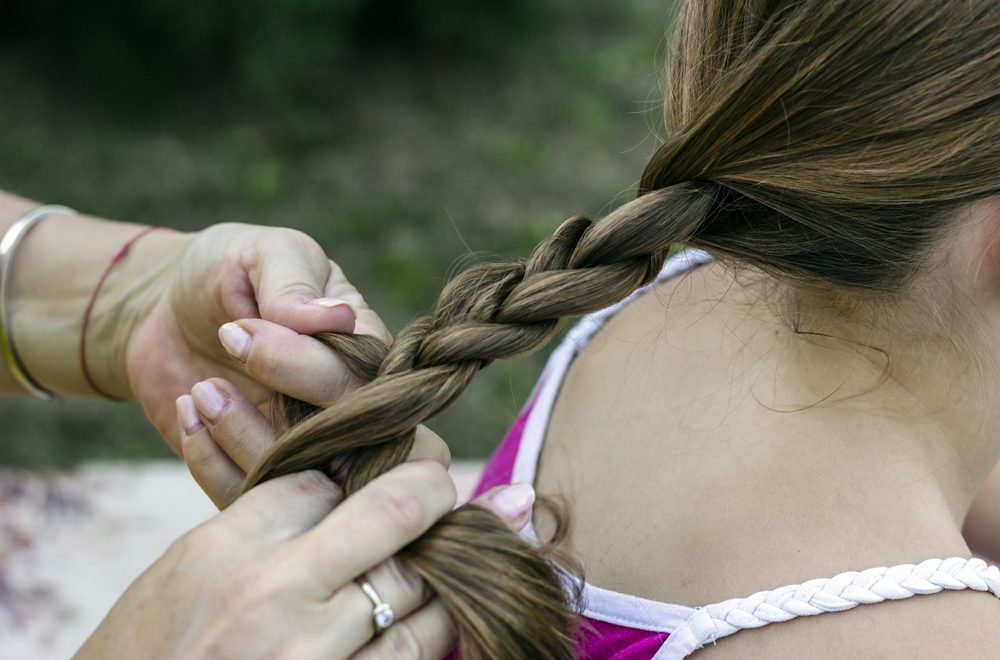 The woman in my hair

in remembering a head of hair

and the way water would caress

it, and stress beauty in the flair

and cut of the only witness

to my dance under sorrow’s tree.

in a ragged pocket, but I

had a true weaving song, a sly

way with rhythm, a healing tone.

The woman in my hair

Parveen*, the woman who cooked food for my family, also worked for one of my aunts. While massaging oil in my hair one evening when I was visiting home from university, she told me that my aunt’s daughter Tehmina used to ensure her hair was oiled and massaged almost every day. ‘She was so particular about her hair’, Parveen said. ‘She loved her hair’. Tehmina died in the early 1990’s, after a suicide attempt at the age of 17 left her crippled.

My mother and her sisters have beautiful, lush hair which seems to be untouched by age or time. Time, wrinkling their faces, deepening its lines, adding weight to their shoulders, weakening their memories, left their long, full, dark hair as it was. ‘We hardly ever shampooed our hair’, reminds Ammi whenever she is putting a smelly concoction in my hair. ‘Our mother would make these hair masks that wouldn’t just make our hair stronger, but would clean it too, so we never used dangerous chemicals.’

My Nani was a plump woman with deep set eyes and a glowing, bronze complexion who migrated from Panipat, India to Lahore, Pakistan after partition as a teenage bride. She grew up alone; a single child to parents who separated after her birth. Her father left Nani and her mother alone to navigate their way through the country, through all the uprisings and chaos gripping India in the 1940s, after which my Nani and her mother, who my Nani’s husband had promised to keep with his family, found themselves making their way to a new land, uprooted from their homes carrying scanty belongings.

Nani was a quiet force in a loud house, cooking food, arranging the house, never saying much, never fighting, arguing or complaining as her seven children grew up. Her five daughters were nothing like her. They were all talkative and spirited, waiting for their strict, conservative Muslim father to leave the house so they could pull out a dholak and clap on the recent song they picked up on the radio from across the border.

The only place where she had her say was how the girls took care of their hair. All the girls would get braids put in before leaving for school, and would come home to potions made by Nani meant to enrich their hair. She would massage the masks into their hair and instruct the girls on how, and when, to wash it off. Control over hair was a form of agency for my grandmother in a culture where women have little of it.

There was hardly any practice of cutting hair. Even the bigger cities of Pakistan did not have hair salons for women until the late 1980s, so women in my family would trim their hair themselves. It was after the opening of beauty parlors that the sisters, now mothers to young children, got dyes or perms. They were finally in control, as were other women in South Asia. Julia J. Thompson in ‘Cuts and Culture in Kathmandu’ writes that women found a safe place in women-only hair salons where they socialized and experimented with their looks. These salons opened Kathmandu’s women to the world, ‘allowing women to express and negotiate with gender identities and interact with women in ways not possible elsewhere.’

Some years ago, when one of my aunts was suffering through breast cancer, Nani wept when she saw my aunt’s buzz cut. ‘Oh’, she sobbed quietly, ‘my daughter’s hair…’

My mother has agency over her two daughters’ hair too, but she is a headstrong woman, a dominating matriarch who controls the house while my father provides the finances from overseas. She sets the rules, which are now negotiable now that her youngest child is in his teens. So she sat quietly, with a fierce look of disapproval in her eyes, as I got my hair cut to my chin last year.

It was my act of defiance. Unrequited love had broken my heart and spirit. ‘Make him disappear, go get him out of my hair’, I hummed Little Mix’s ‘Hair’ as the hairdresser chopped my hair off. I wanted to own my narrative; to break away from a culture of obeying and submitting which was symbolized by the knee-length braids my aunts and mother had. Unlike Tehmina, who was kind to her hair but not her body, I chose to let out all my frustrations and hurt on it. Cutting it would cut off all my misery, I thought. It didn’t, obviously, but it was a change; something new to see in a mirror.

I lost my Nani last year. Her body was frail and tired. Her hair was cut short some years ago when her movements slowed and she got sick frequently, or hurt. Whenever I went to see her, she would touch the tips of my hair, dead and brittle from lack of care, but not say anything. She had dementia in her last days and completely lost her already small voice.

As I heal from heartbreaks, I take care of my health and body. I am kinder to my hair. I braid it every night, like my Nani would. Her caring and love for her daughter’s hair was perhaps her own expression of self-love, entwining with their braids pride and affection, her way of showing ownership after the tumultuous tides of chaos in her childhood swept everything, including her identity, away. I have allowed her, through the concoctions she taught my mother, through time and space, agency over my hair.

*Names have been changed

I am a journalist working in broadcast media and am based in Lahore, Pakistan.