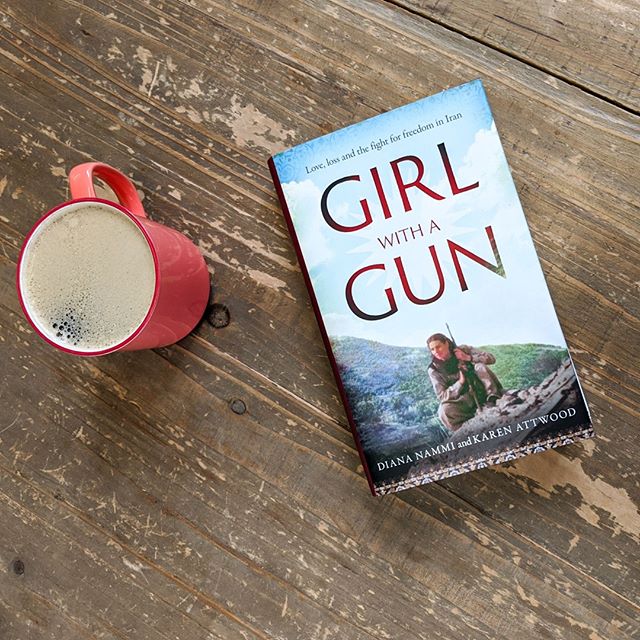 Girl with a Gun

Girl with a Gun begins with a startling vignette of Iranian life in the 1960s. A wedding in the Kurdistan region unfolds over the traditional three days of festivities: hands are painted with henna, women visit the public baths, there is feasting and dancing, and finally… the consummation. But it ends in disaster: the bride – a petrified teenager, married to a man more than twice her age – is weeping; her husband is furious. Her life is at risk: without bloodstains on the sheets to vouchsafe her virginity, her family’s ‘honour’ is ruined. A girl of around four years cowers behind her mother, horrified by the sudden change in mood. It is only the intervention of the man hosting the party – the little girl’s father – that her life is saved and the husband, one of his employees, placated.

Girl with a Gun is the autobiography of former Peshmerga and women’s rights activist Diana Nammi, co-written with Karen Attwood. She was the girl at the wedding. It is her earliest memory. As a preface to the work, this chilling encounter serves as Diana’s origin story: a single moment prefiguring her life’s work as an activist against ‘honour’ based oppression, and for women’s rights.

It was also her first encounter with injustice. Her father was an affectionate man with egalitarian instincts who ran a small bakery in Baneh, in the west of Iran, who loved and supported his daughter. But outside the home, she found plenty of injustice in the poverty and neglect of the Kurdish regions under the Shah, as well as the brutality of SAVAK, his secret police. After two boys in her community were executed for harbouring a fugitive she also lost her faith in a just god, rejecting Islam entirely. After losing faith in God, she also lost hope in conventional politics when the popular revolution of 1979 was supplanted by the brutality of Khomeini’s regime.

She enrolled at teacher training college, gaining independence from her family for the first time. Despite the stifling influence of secret agents who had infiltrated the staff and student body, many of the young women studying were passionate idealists. Alongside studying the curriculum, she learned about politics – including learning the term socialism – from her fellow students who were enthusiastic about the possibilities of grassroots political activism.

After graduating, Diana set out to teach basic literacy to village women and children. Due to government edicts, she was forced to teach in Farsi rather than the Kurdish language, even though it was her own and her students’ first language. Determined to create a positive change, and inspired by the courage of the Peshmerga fighters, she decided to join Komola, a Communist group formed by Kurds in Tehran in 1969. She climbed the ranks from a community teacher/organiser to the commander of a military unit. Initially, she moved from village to village, establishing community councils – and insisting upon women’s representation within those councils. These resemble the community-level structures now gaining prominence in Rojava which organise the life of the community and adjudicate disputes between people. It was in one of these villages that Diana replicated her father’s intervention into an ‘honour’ crime: a mother of five was accused of killing her abusive husband. The entire community were calling for revenge. Diana staged a community council, and patched in a call from a senior party member to broker peace, saving the young woman’s life. Later, in hospital, she urged for the treatment of a young mother suspected of ‘dishonour’, who she believed would have been left to bleed to death without her intervention. Her commitment to ending ‘honour’ crimes runs throughout her life.

Even within Komola, attitudes to women and female sexuality were by no means liberated. The party expected to be able to arrange marriages, firmly condemned extra-marital sexuality, and saw romance as a weakness, particularly when initiated by women. Diana was passed over for full membership because of her desire for a marriage based in love rather than one which fitted the demands of the party. She was deemed to be too romantic. Yet a satisfying love life eluded her. Her first engagement ended tragically when her fiancé was shot shortly before the wedding was to take place. A long, intense relationship with a comrade collapsed painfully for unclear reasons. She ultimately got married, more out of convenience and a need for security than out of passion. The relationship soon foundered.

As a peshmerga, Diana became as well-known outside the organisation as within it, and was particularly known as a crack shot with a rifle. Her nom de guerre, Galavezh, became notorious, but for every folk song in her honour, there were more young girls who happened to share her name interrogated by the regime’s forces. For every military triumph, there was a cost in terms of the lives of her comrades. Her revolutionary zeal became overlaid by trauma.

After marriage she became pregnant and had more than her own safety to consider. Finally, at her family’s urging, Diana and her young daughter left the Middle East to seek asylum in the UK. It was in the UK that the next chapter of her life – the founding of IKWRO, a charity supporting women at the risk of ‘honour’-based violence and domestic abuse in the UK – was to begin.

Girl with a Gun is an essential testament to women’s often overlooked role in revolutionary movements, and a valuable insight into the history of the Middle East. It serves as an intimate study of gendered dynamics within revolutionary movements. It establishes the history behind the popular image of militarised Kurdish female fighters through a first-person account of one of the pioneers. But primarily, it is a thrilling life story of one extraordinary, courageous and dynamic woman.

Girl with a Gun is available at local bookstores and can also be ordered on Amazon here.