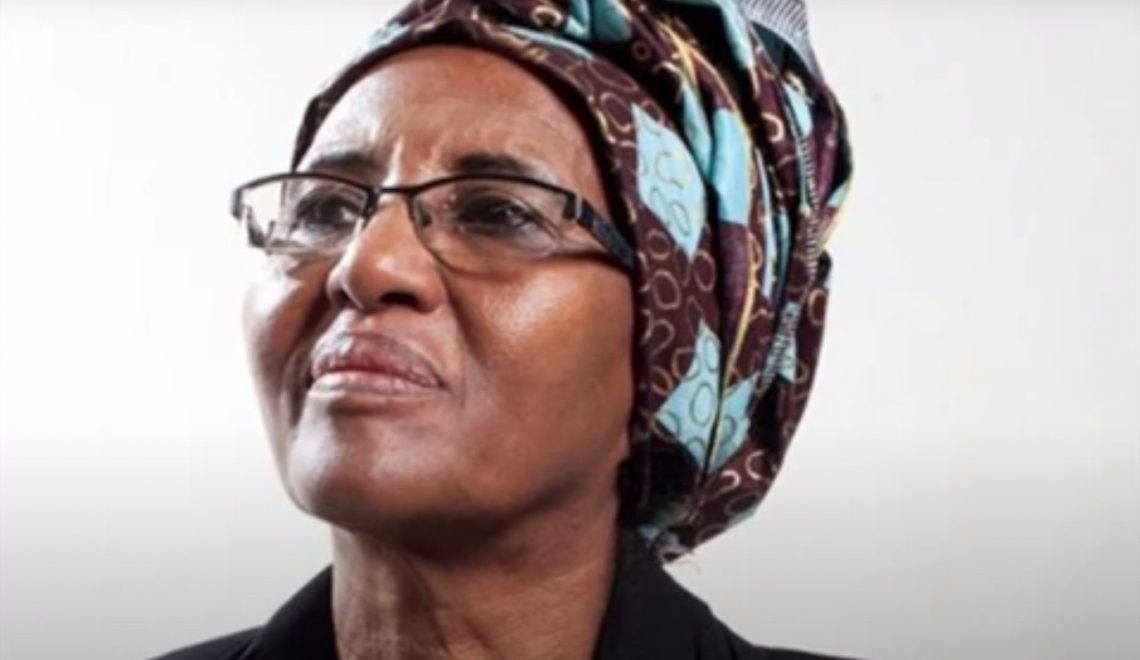 What was most important was that no person inside our place stole, fought, or killed. So long as that was true, I treated the wives and daughters of every warlord. – Hawa Abdi

Hawa Abdi was a Somali physician, peace activist and humanitarian, who founded a non-profit organisation to provide healthcare in Somalia. She founded a small clinic which developed into a hospital at the centre of a refugee camp welcoming victims of Somalia’s civil war.

When Hawa was eleven years old, her mother had a difficult and painful pregnancy, miscarried, then became deathly sick, haemorrhaging constantly. The hospital, unable to help her, sent her home where she died. Hawa became determined to dedicate her life to saving women and children. On her first day back at school after the death she told her teacher, ‘I want to study the human body. I want to find out what killed my mother.’ However, she was married off to a military officer shortly after her mother’s death. The first week of marriage was ‘the worst seven days’ of her life, partly due to the fact she had undergone FGM. She had a child, who was born sickly and died while Hawa was back at the family home attending her grandmother’s funeral. The couple separated afterwards.

Hawa went on to excel in Somalia’s school system. A Russian teacher supported her to find medical training in the USSR, securing her access to one year of preparatory training, followed by six years of medical school. She studied in Moscow and Kiev, inspired by the Soviet work ethic and a respect for science. While studying, she met her husband, Aden Mohamed. She married him two years after she returned to Somalia and after ending her studies. He was also a Somali who had been studying engineering in Ukraine. Hawa had asked him to wait for her to establish her career before marriage.

Over time she developed a specialism in paediatric medicine. She found that Somalia’s medical system was dominated by its colonial past, and that Italian men held the majority of important roles. She also found that Somalis often preferred folk remedies to formal medicine. They often refused Hawa’s help, or only accessed it too late.

Hawa’s sister died of hepatitis and Hawa briefly took care of her three children until their father reclaimed them. She then returned to work at the Ministry of Higher Education, teaching obstetrics and gynaecology at Somalia’s National University. She gave lectures, and was shadowed on her hospital rounds by medical students. However, she grew nostalgic for the simpler life outside the city. She visited her half-sister, Faduma Ali, in Lafole. Previously, Hawa had bought herself a small piece of land near Mogadishu. She resold it for a huge profit and used that money to buy land in Lafole, constructing a small farm and shop for Faduma Ali, as well as lodgings for her family.

After some difficulties with corrupt local government officers, she moved her family to the compound in 1983. The farm prospered while Hawa and her husband commuted to work in Mogadishu. However, some of Hawa’s patients began to visit her on the farm, and she began to visit villages in the community to deliver healthcare services, accompanied by her children, tying her closer to Lafole. Fortunately, it was at this point that Siad Barre, Somalia’s dictator, granted permission for physicians to establish private practices. Hawa took this opportunity to build a one-room clinic on her compound in order to deliver emergency care to local women. Drawing money from her salary, she hired staff and built a space to accommodate 23 patients. The clinic opened in 1983. After two months, it was catering to around a hundred patients a day.

In order to keep catering to demand, Hawa met with Siad Barre to ask his permission to build a hospital. He gave her authorisation to build a clinical ward and increase the number of beds. This allowed her to carry out caesarean sections. She renamed the building the Hawa Abdi hospital.

From the late 1980s, Siad Barre’s dictatorship was becoming increasingly unstable, and inter-clan violence was erupting. Hawa was forced to use techniques she had learned in the Soviet Union to treat bullet wounds and other horrific injuries. Refugees began to flood into her hospital, many of them using it as a stop off point on the way to camps in Uganda, Ethiopia and Djibouti.

The government fell in 1991. By the middle of the year, more than 4,000 people were living on Hawa’s land; supplies from the farm were running low. Hawa sought help from UNICEF and other aid bodies. Despite international assistance, as many as fifty people died of malnutrition a day. They were buried in a graveyard built on site. Hawa and her family lived in fear of militia marauding the area. She was worried about the safety of young women and girls, fearing they would be raped. She even personally confronted a gang of young men, talking them out of entering the hospital where women and girls were hiding. ‘The only way you can enter is if you kill me first,’ she challenged them. They backed down. A later raid caused Hawa and her family to flee the camp briefly. Undaunted, she sought help from local village elders, who provided a team of young men to protect the camp.

She instituted a rule whereby camp residents were no longer identified by their clan in order to reduce tensions: ‘In our place, we are all Somali,’ she insisted, making the camp an oasis of peace within a brutal, factionalised landscape. Her work became internationally recognised. Both President George Bush and UN Secretary Boutros-Boutros Ghali visited the camp. With foreign support, she was able to open a Women’s Education Centre to teach women sewing and handicrafts as well as improving their literacy.

However the strain began to tell, and intensified when her husband deserted her to follow a cult, and then took a second wife. Most devastating was when her beloved son Ahmed died in a car crash. She sank into a physical and mental crisis, suffering depression and a stroke. Despite her personal anguish, she never gave up her hope in Somalia’s future: ‘I know that one day, the truth will come out: the bandits, the people who use our religion as a shield, will be destroyed totally and the poor people will get back their rights.’

Hawa Abdi received several awards and honorary degrees for her humanitarian work, and was also nominated for a Nobel Peace Prize in 2012. A documentary called Through the Fire tells her life story. She died suddenly at the age of 73. Her daughters continue her legacy in working with the Drs Hawa Abdi Foundation.