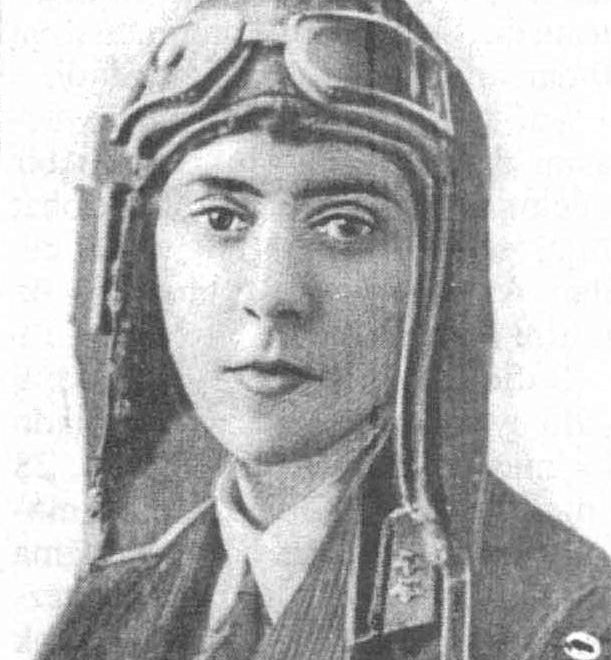 Leyla Alasgar qizi Mammadbeyova, born Leyla Zeynalova, was the first female pilot in the Caucusus, Southern Europe and Middle Eastern region, as well as being a flight instructor who trained many other pilots. Mammadbeyova was famous across her native Azerbaijan, and described as ‘the Mistress of the Skies’.

She was born in Nadaran, a traditional coastal village on Abşeron Peninsula, which is now a suburb of Baku. She was an only child, named after an aunt who died in early adulthood. She lost her mother at an early age, growing up with her father Ali Asger, a revolutionary activist and member of Hummet (the Muslim Social Democrat Party) in a series of rented houses. As a child, she enjoyed exploring and would travel by phaeton (carriage) around Baku, charging all the expenses to her father, a well-known man in the city. Her father also valued the arts – his cousin Huseyn Arablinski was one of the country’s pioneering actors in film. Mammadbeyova could play the piano and the Azerbaijani tar, a long-necked lute which is played by plucking the strings.

As a child, she also experienced the trauma of the Soviet invasion, including hearing gunfire and attending a mass burial. Three years after the invasion, at just 14 years of age, she married Bahram Mammadbeyova, a former landowner whom she had met near the Teze Pir mosque. Bahram’s holdings had been confiscated by the state and he became a printer. He was later to play a role in developing the first cooperative house in Azerbaijan before becoming a bank manager.

Mammadbeyova had her first child by the age of 16. Whilst attending Abilov’s Club, an educational resource for women, Mammadbeyova’s friend Zibeyda Ahmadova told her that that a flying club had been established in Baku. Excited, the two young women decided to sign up together. Zibeyda was rejected due to a heart condition, but Mammadbeyova was accepted. It was decided that her attendance should be kept secret, in order to protect her from negative reactions from people who believed that a woman’s place was in the home, not the cockpit. Indeed these sexist attitudes were to follow Mammadbeyova throughout her life: in Kchachmaz, a town in north-eastern Azerbaijan, she even survived an assassination attempt.

She made her first flight in 1931 whilst she was still in her early 20s. The year after, she attended aviator school in Tushino, Moscow, leaving her two young children in the care of a nanny. Here, she studied the properties and mechanics of the U-2 biplane. While attending aviation school, her traditional hairstyle became troublesome. Mammadebeyova typically wore her long hair in two plaits, which she either tucked into her belt or into her radio-helmet. This proved inconvenient and uncomfortable. The school’s management decided they needed to ask her husband for permission for her to cut her long hair, which he granted.

She became the second woman parachutist in the Soviet Union, jumping from a U-4 plane at Tushino aerodrome. Parachute jumping was an optional part of her training and involved clambering onto the wing and jumping off. Her trainer discouraged her from attempting it and her husband was horrified at the prospect, fearful of their children losing their mother. She was dauntless, however. Terrifyingly, her parachute failed to open, and the ropes entangled her legs. Luckily, she was saved when the secondary parachute deployed successfully, and she obtained her parachutist badge, which was unprecedented in the USSR. In the same year, she participated in a parachute contest between the republics of the Southern Caucasus, taking first place. She became a celebrity, appearing on the front page of the magazine Ogonyok (Flame).

Despite her fame and accomplishments after returning to Azerbaijan she was designated to serve as the director of a library. It was only through the intervention of her supporters that she was able to resume her career as an aviator.  She worked as a pilot and instructor at Baku Airclub from 1933 through to 1941. She enjoyed exploring Azerbaijan and took women, and sometimes children, for flights. She featured in the 1934 movie Ismat (Honour) based on her story. She acted as a stunt double for the actress playing her – possibly making her the first female stunt pilot in history.

When WWII commenced, she refused to enter active combat, giving the reason that she was raising four of her six children at the time. Although the Baku Airclub closed down due to the war, Mammadbeyou continued to organise her own club. She awoke at 3am to get to work by 9am due to the limited public transport available at the time, walking a long distance to provide courses in gliding and parachuting along with Tatyana and Mikayal Svarenko. The Glider-Parachute Club trained hundreds of combat pilots and around 4,000 paratroopers. In 1941 she was made a squadron leader in the Soviet army.

Mammadbeyova flew her last flight in 1949. She had been told by doctors that continuing to fly would be harmful to her health. She continued to act as the Vice-Chair of the Baku branch of the DOSAAF (Voluntary Society for Cooperation with the Army, Air Force and Navy) until 1961 when she retired on an honorary pension.

Her children remember her as an active and thrifty woman, who would cook baklava to celebrate Newroz, and who was beloved by the seven grandchildren and 13 great-grandchildren who were born during her lifetime.

Leyla Mammadbeyova became a national icon in Azerbaijan while still in her 20s and one of the pioneers of women in aviation worldwide.