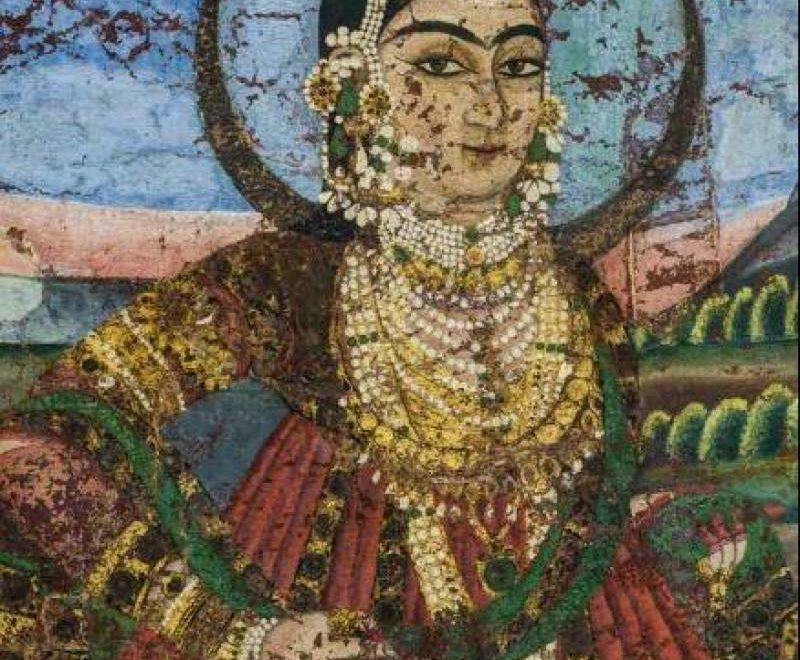 Cups of crimson wine are circling in rounds of dance

If the beloved is glimpsed this party abounds in dance

God has made this believed peerless in my view

Everything before my eyes resounds in dance – Ma Laqa Bai

Mah Laqa Bai, dancer, courtesan and philanthropist, was the first female poet to complete a full collection (divan) of Urdu poetry. She was born as Chanda Bibi; her title was bestowed upon her by the nizam (sovereign) of Hyderabad, and means ‘Moon-cheeks’, alluding to her beauty. She lived in Deccan just after the Mughal conquest, and may have served as the companion to two nizams and three Prime Ministers. She was considered the most beautiful woman in the city, and became one of its most eminent citizens, as well as one of the richest women in South Asia at the time. As a devout Shi’a Muslim within a Sunni-ruled region she also carved out a space for religious diversity.

In that period, a largely Shi’ite courtesan caste were able to transgress the boundaries of purdah, marriage and child-rearing through exploiting their own talents. Courtesans were women who were brought up by their female relatives to be artists, performers and sexual companions. The Shi’ite provision for temporary marriage allowed courtesans to operate sexually within Islamic practices.

Mah Laqa Bai’s mother called herself Raj Kanvar Bai. She crowned her career as a courtesan by marrying the nizam’s treasurer in middle age. She conceived Mah Laqa Bai in this relationship, but almost miscarried after trekking up a hill to the Shi’ite shrine of Mawla ‘Ali. She credited her daughters’ survival to divine intervention and spent the rest of her life in religious contemplation. Mah Laqa Bai was left to be reared by a half-sister. She received an extensive education in Persian, Urdu, music, poetry and dance with a dedicated tutor. She likely would have learned to dance in the kathak style.

By the age of 15, she had gained entrance to the court. Aristu Jah, her patron, had her perform for the nizam who was charmed by her, and invited her to accompany him on military and hunting excursions. After the nizam, and Jah, who was his prime minister, both died, Mir ‘Alam, an Iranian Shi’a became Prime Minister. He was immediately drawn to Mah Laqa Bai, and wrote her strikingly erotic poetry. She was also close to Rambha Rao Jayawant, one of the Hindu nobles within the nizamate, drawn together through a shared interest in horses. He paid her a retainer to dance at his court, and may have invested in her architectural projects.

When she was around 35 years of age, she was awarded the title Mah Laqa Bai during the Newroz festival. This came with extensive territories that made her independently wealthy. She was granted the right to appear as a member of the royal family, with a complement of a hundred bodyguards and the right to travel in a palanquin accompanied by the sound of kettledrums. She also accompanied the second nizam on three military campaigns, reportedly sitting together with him on the back of an elephant. Due to her skills in archery, she also hunted with the royal court. A contemporary painting captures Mah Laqa Bai as the only woman on a hunting trip, surrounded by men, with her pet cheetah alongside her in her palanquin. It is not known how many sexual relationships Mah Laqa Bai engaged in, due to the discretion of her biographer and the difficulty in distinguishing friendship from intimacy. Certainly her relationships with powerful men were as much an element of her ascension to power as her artistic talents.

Other men were also important to her career, such those who tutored her in poetry and music. Her poetry – all of which takes the ghazal form, used for love poetry – is written in the male ‘voice’ since the female voice in poetry at the time was associated with bawdy content. Thus, her love poems resemble self-descriptions as seen through the lens of the male gaze, positioning herself as the object of desire. Almost all of her poems culminate in a couplet of devotion to Ali or other Shi’a figureheads. She gifted a copy of her divan to a British official, Sir John Malcolm which is now preserved at the British Library. Mah Laqa Bai’s personal history is known to us from the Mah-nama (Moon Chronicle) or Tarikh-e Dil-Afros (Heart Dazzling History), a biography which she commissioned herself. Her biographer describes her daily routine as spent occupied in prayer, business and poetry, and her evenings to music, including training hundreds of girls as apprentice courtesans.

She used her wealth to establish a house of training for a new generation of courtesans, as well as musicians, scholars and artists, and a library of rare books. After her death, her house evolved into a college for women. She was also known for her charity and her support of the Shi’ite shrine of Mawla ‘Ali which crowns a hill in Hyderabad. She took an active part in the diverse religious life of the community and herself participated in ritual mourning for Muharram, marking the event in the hall for religious scholars she had constructed. She also provided provisions for lengthy religious festivals for Sufi and Hindu worshippers, donated lavish financial support to clerics and their families, and built a shrine to honour a local Sufi saint. She adopted one young courtesan – Husn Laqa Bai – as her daughter and as the transmitter of her creative heritage.

Her biographer described her as a ‘woman from whose flood of generosity no community or group was excluded.’ She is interred in a complex which she had built at the base of the hill where the Mawla Ali shrine sits, where she joined her mother who had been buried there in 1792. The tomb was recently renovated after a campaign by one of her biographers. Her life is believed to have inspired the first novel in the Urdu language, Umrao Jaan Ada.