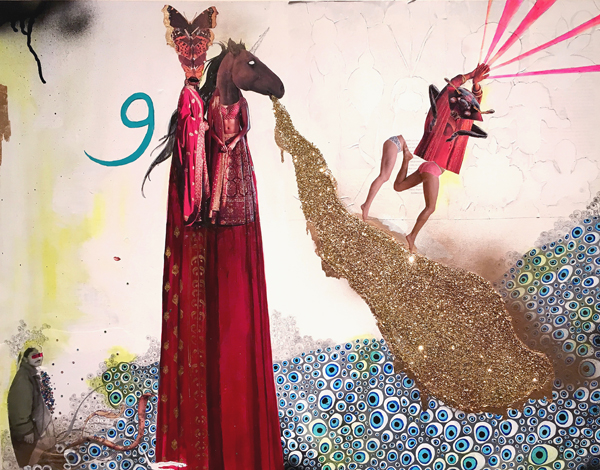 “We do have a responsibility to one another”

Saba Taj is a mixed-media visual artist and activist from North Carolina. Her work centres upon identity and challenging Islamophobia and sexism. 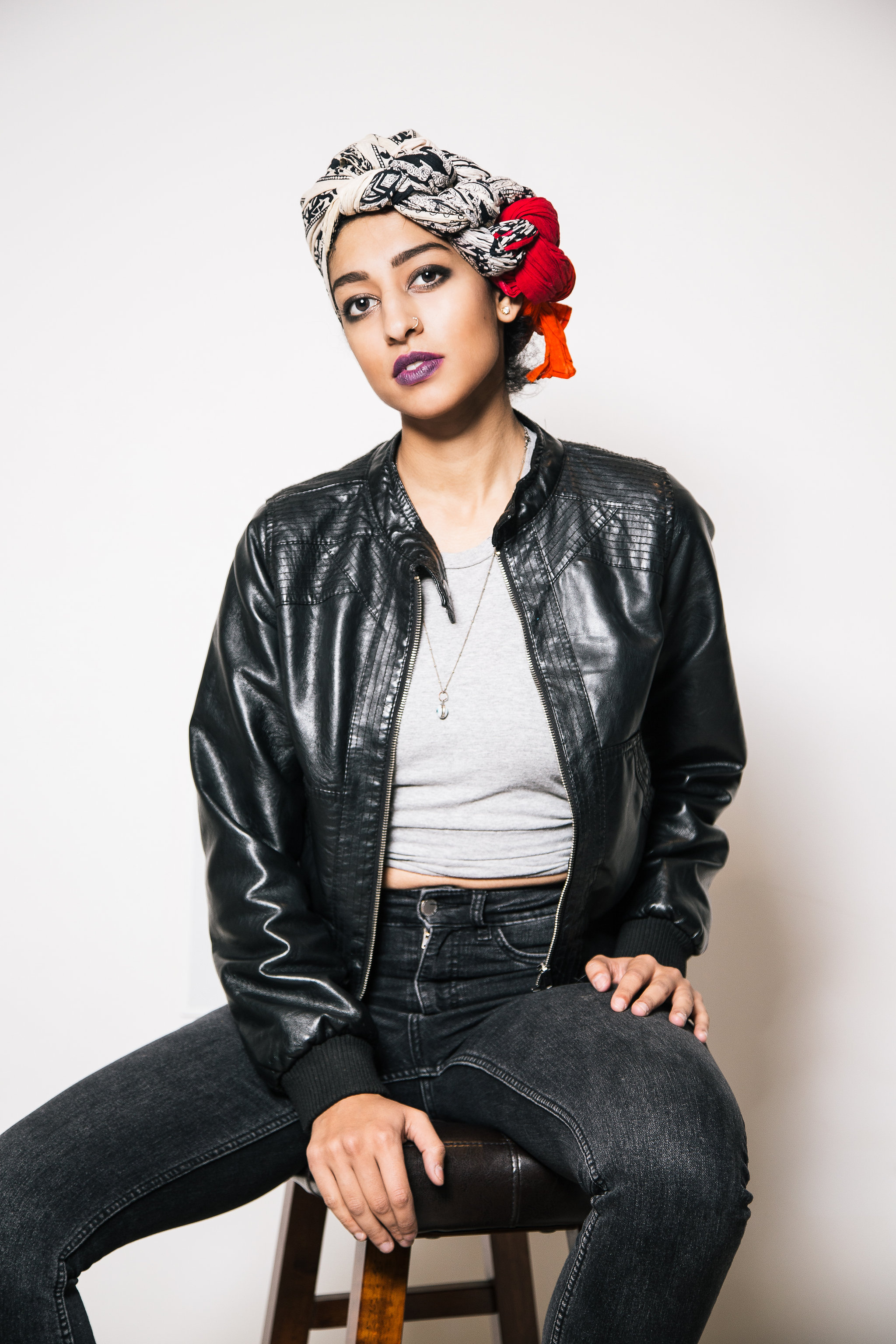 I do not remember there being some sort of beginning or moment when my interest was sparked in art. My mother is a maker, and so I think seeing her engaged in such a consistent creative practice normalized artmaking for me. From a young age I was pretty hungry for all forms of art and expression, including music, poetry, theatre, visual arts, and dance. Visual Art was one of the most accessible of these forms for me, so that’s what I ended up putting my focus on.

Your work aims to humanise Muslim women. In what ways have they been dehumanised in your opinion? What were the particular stereotypes you wanted to challenge the most?

Dehumanisation is a tactic of upholding sectarian power; marginalizing certain groups of people for the benefit of a select few. My focus has been on the visual components of dehumanisation, and how this propaganda is transmitted through media.

Muslim women are dehumanised in certain specific ways that can also intersect with other types of marginalization. Most notably, there is a dominant narrative that describes Muslim women as covered (in hijab or burqa), oppressed, submissive, without voice or power, in need of saving: but also fearsome, brown (but not black) and uneducated. This is a very narrow view of an incredibly large and diverse group of individuals. In the media, these are the images and concepts most commonly described.

What is more common, however, is that we do not see representations of Muslim women at all.

As time has gone on, I’ve felt more and more how problematic it is to have to carry the burden of proving one’s humanity. Originally, my portraits of Muslim women countered some specific stereotypes we face. Now, instead of putting my focus on particular stereotypes, I instead make reference to dehumanisation itself – illustrated by the grotesque hybrid creatures I create from the remnants of popular magazines – to the oppressive force of white supremacy, and to empowerment, even in the face of such forces. There are still many Islamic references and an inclusion of Muslim figures. I am not as interested in a compensatory humanistic lens as I am in a larger conversation about power.

You’ve said you have a responsibility as an artist. Can you elaborate on what you mean by that?

We do have a responsibility to one another, to the most oppressed amongst us. This is how I think about being part of the Ummah, and how to not be a shitty human. As an image-maker, I have a responsibility to consider the impact of what I create, and to challenge oppressive norms. It is a continuous process of being accountable, and a commitment to transform in positive ways. 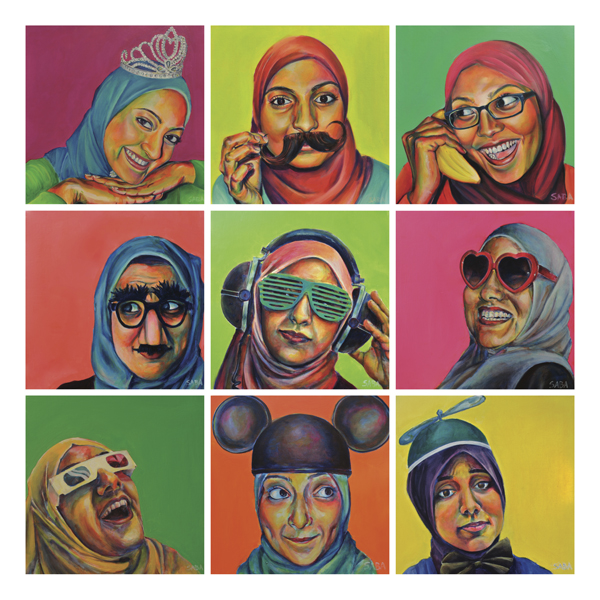 You grew up in America as a young Muslim woman in the aftermath of 9/11. Did you perceive a sudden change in attitudes? How did it affect you?

Yes and no. I think the focus on 9/11, which absolutely impacted policy and culture in the US, is sometimes a bit too myopic. Islamophobia existed before, but this wasn’t on the same scale. In part because fewer people knew that Muslims even existed. In addition, oppressive policies are so easily possible because this country has been built upon racism. I think 9/11 made Islamophobia more mainstream, but it wasn’t a new invention at all.

You’ve spoken openly about being a Queer Muslim artist. Was that a difficult decision to make and why did you feel it was important to speak up about this?

It is very hard sometimes. I am comfortable and open in public space, but I’m also sensitive to being reduced to an identity and am protective of my family and Muslims in general. It feels like folks are most interested in the fact that I am a Muslim woman, and a queer one at that, who is doing anything, rather than what I am actually doing. I’ve been an artist for a long time, so seeing my identity categories supersede the work I am doing is frustrating. It’s also ironic, because as I am challenging media representations in my art, I myself am consumed by this system. I become defined and categorized within the limits of the media’s vocabulary even as I challenge it. It puts me in a  vulnerable position, and to be honest I get exhausted with it and question if it’s worth it. Recently I was asked to be featured in a human interest piece about Muslims in a magazine that I use in my collage work, a magazine that I have actively criticised for its fetishising lens on people of colour. 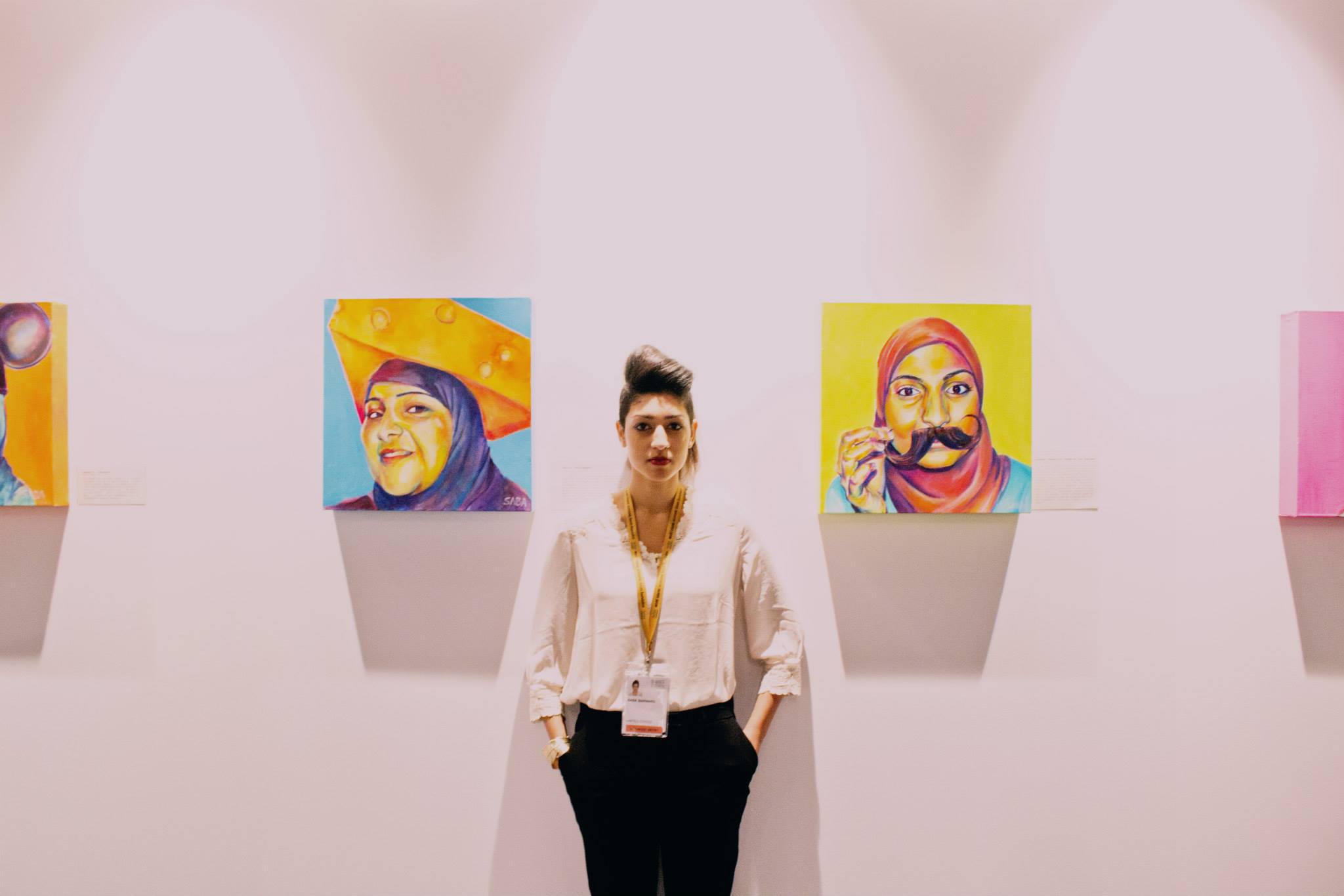 Also there is danger in being open, to myself and more broadly. People have a lot of opinions about my identity without actually knowing me at all. Hateful comments are not personal, but more broadly directed at ‘people like me’. Yet again, people respond to me more as a category than as a person. Some might say it is just human nature to reduce one another in these ways, and that objectification is a natural by-product of being public, but I believe we are capable of more.

What do you feel about Donald Trump?

Donald Trump is the dajjal.

Can you describe your artistic process? 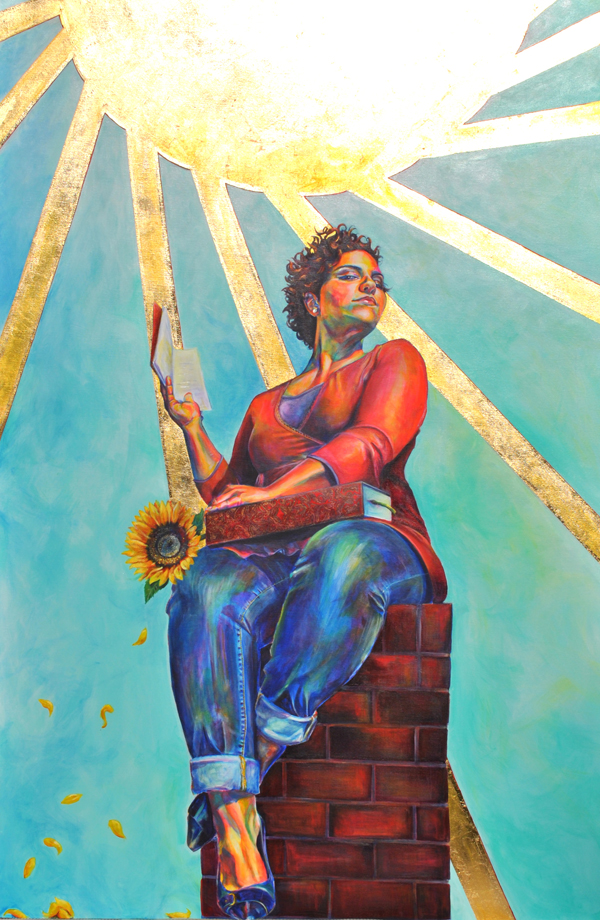 My artistic process is always evolving, and I allow myself a lot of openness in terms of medium and methods. I can easily get bored, so I give myself a lot of space to switch directions and try new things, though there never feels like there is enough time for making art. Over time I have learned to let go more, and not try to control myself or be ‘disciplined’. I’m consistently pushing towards trusting myself instead of worrying about how the work might be categorized or received, or even whether or not it ‘makes sense’.

Pursuing a creative talent isn’t always encouraged for many young Muslim women. Do you have any advice for anyone who wants to do what you do?

Be stubborn. Persistence is key. Plus there often is support out there (depending on where you are, of course), so actively seeking that out and creating support networks opens up a lot of possibilities. To be real though, many kinds of creative work do not offer any promise of financial stability and this is just a hard truth, so for marginalized folks it can be doubly difficult when their opportunities may already be limited, or their circumstances more challenging to start with. I don’t say that to be a downer, but this is a reality that folks have to face in pursuing creative work as a livelihood. But I want to emphasize that what is most important is a person’s own creative practice. Above anything else, the process of creation is what matters most and requires persistence and a belief in the value of your ideas.

You’ve spoken about the need to building media literacy. How can we encourage young women and Muslims to identify and challenge the effects of media upon them?

Media literacy is a by-product of critical thinking. There is an abundance of people who are thinking critically about media and doing the labour to share that analysis. It’s important that we speak up about the things that we notice, even though sometimes it can feel like a buzzkill to recognize everything wrong with every television show, magazine, article, etc.

How can the artworld become more accessible for people from various backgrounds, and with various different perspectives?

In general, both within the art world and within our culture, artists need to be paid for their labour. With funding institutions, inclusive practices have to be explicit in order to be more than a smokescreen – meaning that a clarified percentage of their funds and opportunities should be offered to folks from marginalized backgrounds.

The artworld is a bit of a blurry thing, but it’s a capitalist market. It’s has rightfully earned a very bougie reputation. 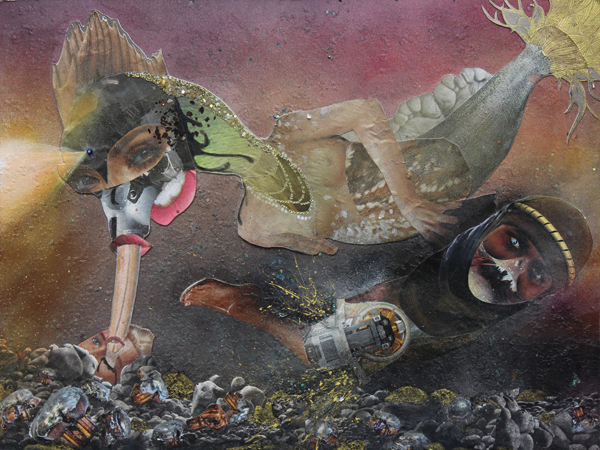 What makes most sense to me is to think of change beginning through many small scale efforts – creating alternative spaces and community-based support for art and artists. This could be a physical gallery space, or someone’s home. Sharing supplies and knowledge outside of the existing institutions can help to create more artists, diminish the impact of lack of access, and grow collectively over time.

What can art contribute to society?

Art is essential for our survival. It is one of the most pure outlets of our humanness, and a vehicle for connection and empathy. It’s also just a lovely language to utilize to communicate about literally anything.

What is next for you?

I am continuing to create art and find ways to share my work with others. I just started teaching middle school art, and am looking forward to creating a lot of new work in the summer months. In February I’ll be showing work at the SOMArts Cultural Centre in San Francisco as part of the show The Third Muslim, curated by Zulfikar Bhutto. 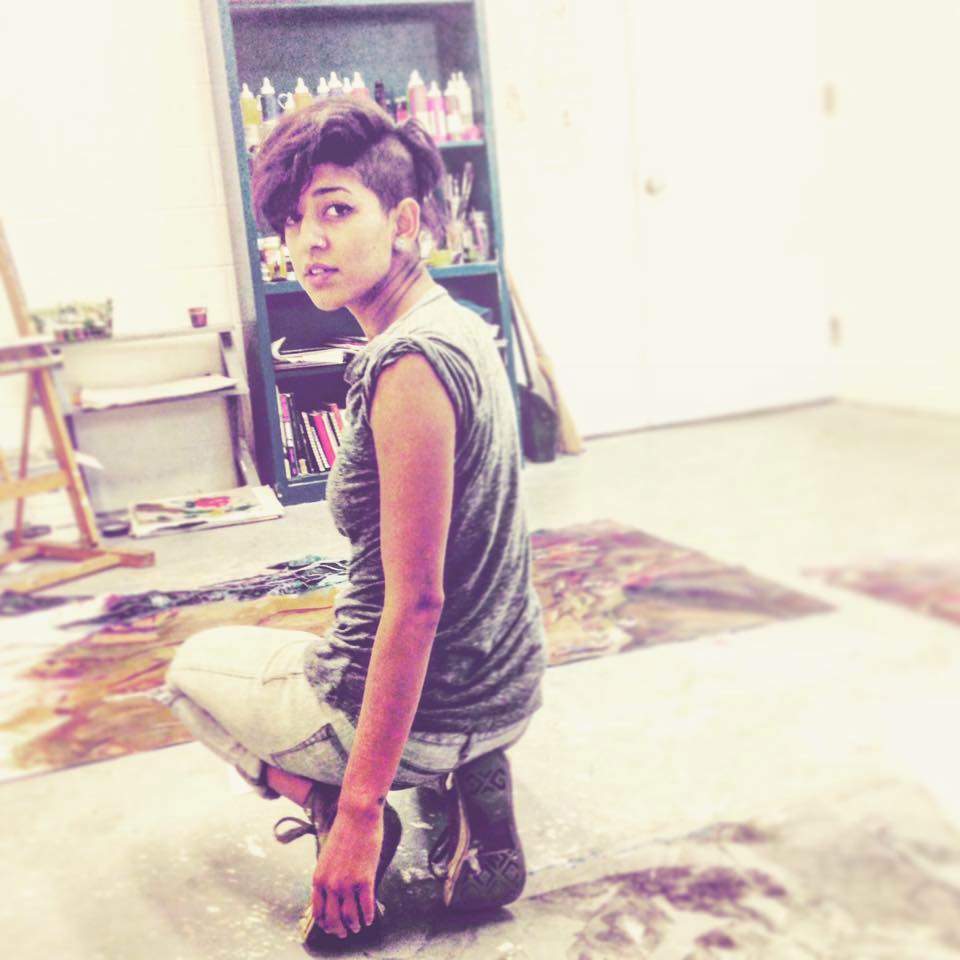 To see more of Saba Taj’s upcoming projects you can visit her website.