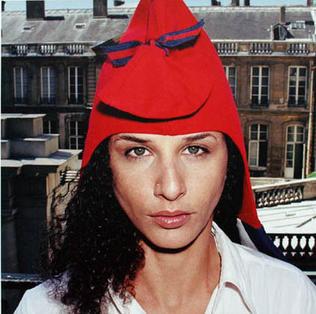 ‘Lots of girls, whom I knew at the time, and who, like me, had their childhoods wrecked by a rape and its aftermath  ̶  bad reps, total rejection and abandonment  ̶  “turned bad.”’ – Samira Bellil.

Samira Bellil was a feminist activist and a campaigner for the rights of girls and women in France’s minority communities. She exposed violent, sexualised abuse of women in Paris’s disadvantaged banlieue.

Samira was born in Algiers. Her parents migrated to the Parisian suburb of Saint-Seine-Denis when she was very young due to their family’s disapproval of their marriage. Both of her parents had difficult families and histories of abuse. Shortly after they arrived in France, her father was sentenced to five years in prison. Over this period, Samira was fostered by a Belgian family, where she was very happy. After her father was released she was returned to her natal family. This was a change she struggled to adjust to at just five years of age. Her father – like many migrants in France – struggled to find work. He was also violent towards his family, including his daughters; he terrorised Samira, including chasing her with a knife on one occasion.

Samira drifted into a life spent on the streets to avoid the violence of her homelife. She engaged in petty crimes as part of a subculture organised around street gangs. At the age of 13, she developed a crush on a 19-year-old man called Jaïd. Jaïd exploited her sexually, then lured her into a basement storage space where she was beaten by several men. One of these was a man called K, who had a reputation for violence. K and his friends raped her, forcing her to re-enact scenes from pornographic movies. The term for gang-rape that they used – tournante – was the same term used for passing around a joint. Rebellious and independent girls like Samira were particular targets for predatory males on the streets. Traumatised, Samira stayed with friends, trying to avoid K and his gang until finally gaining her parents’ permission to visit her foster family in Belgium for a month. On her return to France, she re-encountered K on a train. He dragged her off the train and raped her once again.

Samira applied to a school of art and theatre, hoping to put her troubled past behind her. Two other girls from her community – who had also been sexually assaulted by K – involved her in making a shared crime report. The police responded to her complaints with more prurience than sympathy. They showed little understanding of either the culture of Saint-San-Denis’s gangs or Paris’s Muslim communities.

Her parents were not sympathetic to her situation. Samira sought out emotional support in a relationship with Mathieu, a classmate. They moved in together, supporting themselves through burglary. She was 14 years old at the time and Mathieu’s parents broke up the relationship and Samira returned to her parents’ home – in time for K’s arrest. Samira’s father, upset by the experience of attending the line-up with her, reacted angrily and threw her out of the family home in disgust. Samira moved into a homeless shelter, where she cultivated a tough image, distancing herself from her trauma through drugs and sex – but also experiencing violent seizures that expressed her trauma.

After the end of term, she went on holiday to Algeria with her mother, where once more she was violently gang-raped. The crime was perpetrated by men from her own suburb who were also vacationing from Paris and knew about her reputation. She reported the crime to the Algerian police to no effect. Upon her return to France, the shelter closed down, leaving Samira sleeping rough. At 16 years of age, she was sleeping on the streets, in squats and abandoned cars, passed from hand to hand by France’s chaotic social care institutions.

Upon returning to her community for a brief visit, she learned that K, Jaïd and their gang had now been accused of dozens of rapes. Before the trial, Samira attempted suicide and was briefly institutionalised. Due to an administrative error, she was not informed of the trial date until two days after it had taken pace. She missed her chance to give evidence. Nevertheless, over a dozen women testified, and K was sentenced to eight years in prison; Jaïd to six. Samira was devastated by her inability to have her day in court, and enraged by the ‘symbolic damages’ of just one Franc demanded from K.

However, after the trial, her life slowly came back on track. Samira reconciled with her mother and returned to her interest in theatre, finding a flat and making tentative moves towards a career. Most importantly, she found a therapist to help her process her experiences. She also investigated the possibility of further legal action. Fourteen years after her gang-rape, she addressed an appeals court in Versailles. She won her case, and was awarded 100,000 Francs on her 27th birthday.

After this, she was introduced to a publisher by her therapist and wrote her autobiography. This book, Dans l’enfer des tournantes (literally meaning ‘In gang-rape hell’, translated to English as To Hell and Back: The life of Samira Bellil) was published in 2002. It alerted France’s attention to the abuse of minority women within in Paris’s neglected ghettos. Samira had made moves towards working in theatre and in community work, which she loved, including making connections with Fadela Amara, founder of the organisation Ni Putes Ni Soumises. Gradually she was finding her way towards a greater peace of mind, healing from her experiences. However this was tragically short-lived: she died at the age of 31 from stomach cancer.

The legacy of her experiences, her courage and her honesty exposed the violence of women’s lives on the margins, and their struggles to achieve justice. Her autobiography ends with recognition of the hardships she faced – and her ability to overcome them: ‘I am no longer Sam the “scum” or Sam the “rape victim”… I am Samira, I am twenty-nine. I believe in life and I aspire to happiness. I have done what I had to do to be capable of it.’