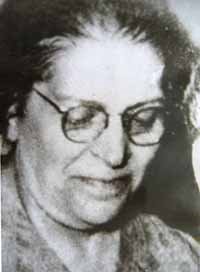 Described as the ‘founding mother’ of Iranian feminism, Sediqeh Dowlatabadi was born to an old and respected family in Esfahan in 1882. She studied in Teheran and married at just 15 years of age: but she was soon divorced. In 1917, at 35 years of age, she founded the first girl’s schools and women’s organisation. Conservative clerics attacked the school and beat Sediqua, imprisoning the school’s head-teacher for three months. In 1919, she published the first women’s magazine in the country, called Zaban-e Zanan (The Woman’s Voice) in Esfahan. This was criticised by local religious authorities, and finally banned. Sediqeh moved to Tehran and continued publication. Zaban-e Zanan was the first women’s magazine to be circulated outside Tehran – and it only accepted submissions from women and girls. After the magazine was closed, she continued to campaign for women’s rights, and against British influences upon Iranian politics.

In 1923, she obtained a degree in Education from Paris’s Sorbonne University, and in 1926, she served as the representative for Iran at the tenth congress of the International Alliance for Women’s Suffrage. She returned to Iran in 1928, taking up a position as Supervisor of Women’s Education, and then as director of the Inspectorate of Women’s Schools.

Her most important campaign was for women’s suffrage. She persuaded Mohammad Mossadeq to grant women the vote; but due to the British/American sponsored coup, this never came to pass. In 1962, Sediqua died, at 80 years of age. Less than two years later, Iranian women received the right of suffrage for which she had campaigned for so long.

Her will stated “I will never forgive women who visit my grave veiled.” During the Islamic Revolution, her grave and those of her relatives was vandalised, and after Mahmoud Ahmedinejad became Mayor of Tehran, her grave was dug up and her remains thrown into the river to make way for a park. But as the founder of Iran’s strong feminist movement, the memory of Sediqeh Dowlatabadi lives on.