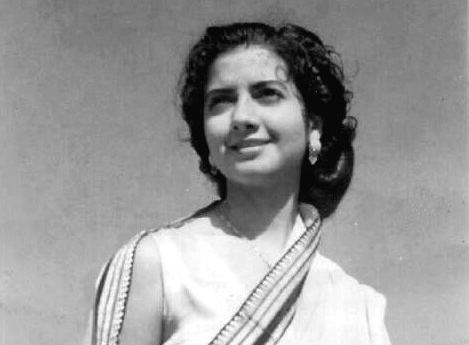 I had written strongly because a grave injustice had been perpetuated … All I could do was pray that my magazine would survive the ban. – Zeb-un-Nissa Hamidullah

Journalist, poet, novelist and political commentator, Zeb-un-Nissa Hamidullah was one of the first South Asian women journalists, and the first female editor and publisher in Pakistan. Born Zeb-un-Nissa Ali, she grew up in a literary family in Calcutta, where the family home served as a salon for the local intelligentsia. Her father, S Wajid Ali, was a Bengali nationalist and himself a writer and publisher, who had translated the writings of Iqbal into Bengali. Her mother, Eleanor Saxby, had nursed her father through a period of ill-health while he was studying at Cambridge: a relationship which developed into his second marriage. Zeb-un-Nissa attended a Catholic girls’ school, the Loreto School, in then Calcutta. In 1940, she married Khalifa Muhammad Hamidullah, a businessman from a well-known Punjabi family. It was a love marriage, and Zeb-un-Nissa would dedicate all her novels to her husband.

Zeb-un-Nissa initially wrote for Indian newspapers, being the first Muslim woman to write a column published in an Indian newspaper. In 1936, one of her poems was published by Bombay’s Illustrated Weekly of India. She continued to contribute to that paper up until partition. In 1941, she published a book of poetry – Indian Bouquet – through her father’s press. The first edition sold out in three months. It was followed by a second collection, Lotus Leaves.

In 1942, she moved to Punjab with her husband. This dramatic change in lifestyle – the contrast between her own Anglo-Indian upbringing and the sprawling families of Punjabi culture – is referred to in her short story collection The Young Wife. This was first published in 1958. Her first daughter Nilofar was born in Punjab in 1943.

In 1945, Zeb-un-Nissa and her husband were in the Himachal Pradesh area at the time of the Simla Conference, which was a meeting between the British Viceroy and the political leaders of British India. Here, Zeb-un-Nissa met and befriended Fatima Jinnah, the sister of Mohammad Ali Jinnah, who would become the first General Governor of Pakistan. Through Fatima’s intercession, Zeb-un-Nissa was able to secure an exclusive interview with Jinnah. This established her journalistic credentials and boosted her burgeoning career as a writer.

After partition, in 1948, she became the first female columnist to write in the Pakistani newspaper Dawn. Her second daughter Yasmine was born the next year. Zeb-un-Nissa continued to write for Dawn up until 1951, when the editor insisted that she eschewed political writing and concentrated on ‘issues related to women’, which he defined as ‘cooking and child-rearing’. She launched her own magazine in 1952 instead. The Mirror of the Month was Pakistan’s first women’s magazine in English, successfully targeting a wealthy, sophisticated female readership through its high production values – and its passionate editorial positions upon contemporary politics.

Zeb-un-Nissa became so well established as a journalist and editor that she was included in numerous official press activities. She was the first female journalist to travel abroad with the Pakistani press delegation. During one of these trips she became the first woman to speak at Al-Azhar University in Cairo. She also travelled to the United States in 1956, where she met and befriended Marilyn Monroe and film director Jean Negulesco, as well as appearing on the Ed Sullivan Show. She wrote about these encounters in The Times of Karachi and later released them as a collected travelogue called Sixty Days in America.

The Mirror’s editorials frequently featured blistering critiques of contemporary politics, including fierce criticisms of Pakistan’s first and second presidents Iskander Mirza and Mohammad Ayub Khan.  Her criticisms of the forced resignation of Prime Minister Huseyn Shaheed Suhrawardy under Mirza’s presidency in 1957 led to The Mirror being banned. Zeb-un-Nissa refused to withdraw her statements. The magazine ceased production for six months whilst Zeb-un-Nissa appealed to the Supreme Court with the assistance of the lawyer and jurist A K Brohi. She won her case and was awarded costs. She continued to publish The Mirror until 1972, despite an increasingly hostile and authoritarian environment.

Zeb-un-Nissa wrote novels as well as her journalism and poetry. Her novels tend to have a romantic tone, carrying a subtext of rebellion against conservative values. Her best known work, The Young Wife, was reprinted in 1971, 1987 and 2009. It depicts lifestyles in the lower classes as well as urban Karachi, with a focus upon marriage and the role of women.

She was one of the founding members of the Pakistani Working Women’s Association, and the first president of the Karachi Business and Professional Women’s Club. She was the first female president of the Flower Show Committee and a member of the Horticultural Society.

In 1971, she closed down The Mirror and its associated businesses and moved to Dublin, Ireland with her husband, who was relocating for professional reasons. The couple returned to Pakistan at the end of the decade. In the early 1980s, she held the position of president of the All Pakistan Women’s Association and wrote occasional columns for Karachi’s Morning News.  She spent the last few decades of her life in seclusion, mourning her husband who had died of a heart attack in 1984, writing only sporadically until her sudden death in 2000.