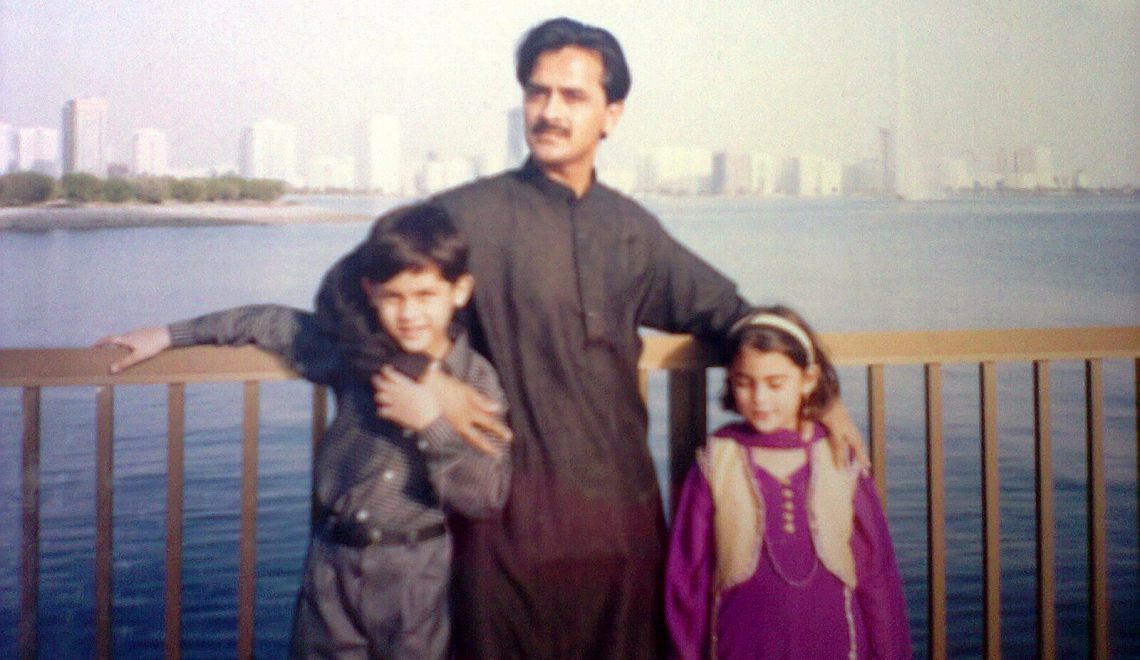 I was born into a typical middle-class Pakistani family which adhered to some basic traditional values but was otherwise relatively moderate in its religious practices. My father, a general medical practitioner who was born and raised in poverty, moved to the Middle East in search of a better livelihood, leaving his very young wife and two toddlers behind. As soon as he became successful in his attempt to gain sustainable employment, he brought his family to the artificial but opulent pastures of the United Arab Emirates. 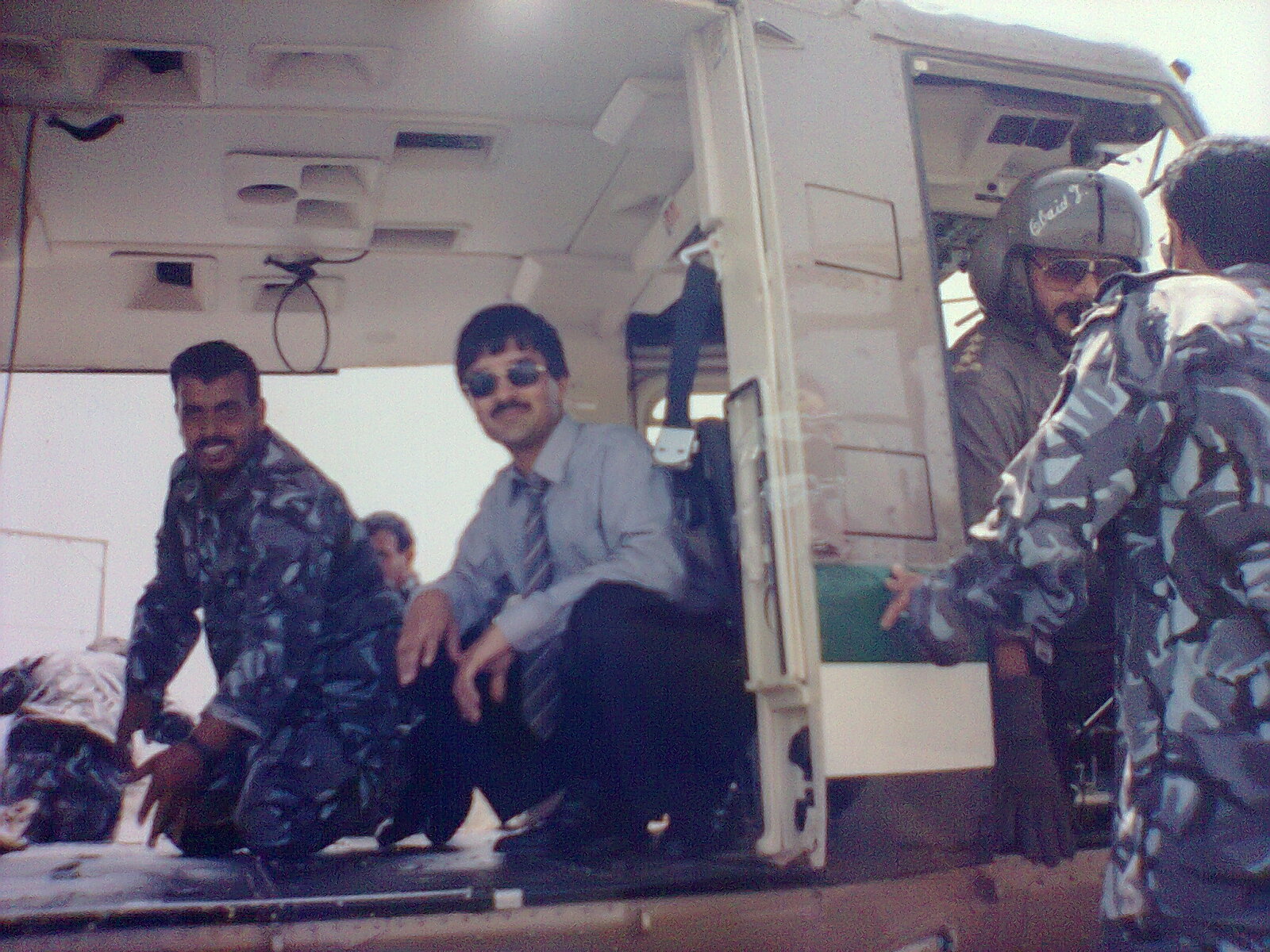 Image of the author’s father (second from left) as the chief medical officer for the Sharjah Police Academy in the mid 90s.

He was always a man of many principles. Most importantly, he instilled in me the value of pursuing my passions. I was a very creative child. He would fuel my amateur artistic activities by getting me new materials such as crayons, paints, stamps, and beads, to inspire me every once in a while. Being a straight A student, who never needed to be reprimanded to focus during study time, he constantly encouraged me to do whatever I wanted.

When I turned 12, we moved back home to Karachi due to the discrimination my father had faced as a foreigner in the Emirati man’s land. He started practicing medicine privately in Karachi, waking up every day with newly rediscovered vigour, looking forward to his daily activities in his clinic and at home. Despite all the personal and professional hardships that he faced in Pakistan as a grown man starting over, he never encouraged us to compromise on what we wanted. Above everything, my father instilled in us the value of education. He believed that only education could redress our inadequate financial circumstances. He taught us that education would become a powerful way for us to live the lives that we had dreamt of as children. When I began writing for newspapers and magazines at the age of 14, my father would rave proudly about my literary skills to anyone and everyone. As a father, of course, he viewed my work in higher esteem than it probably deserved, but his pride kept me going. 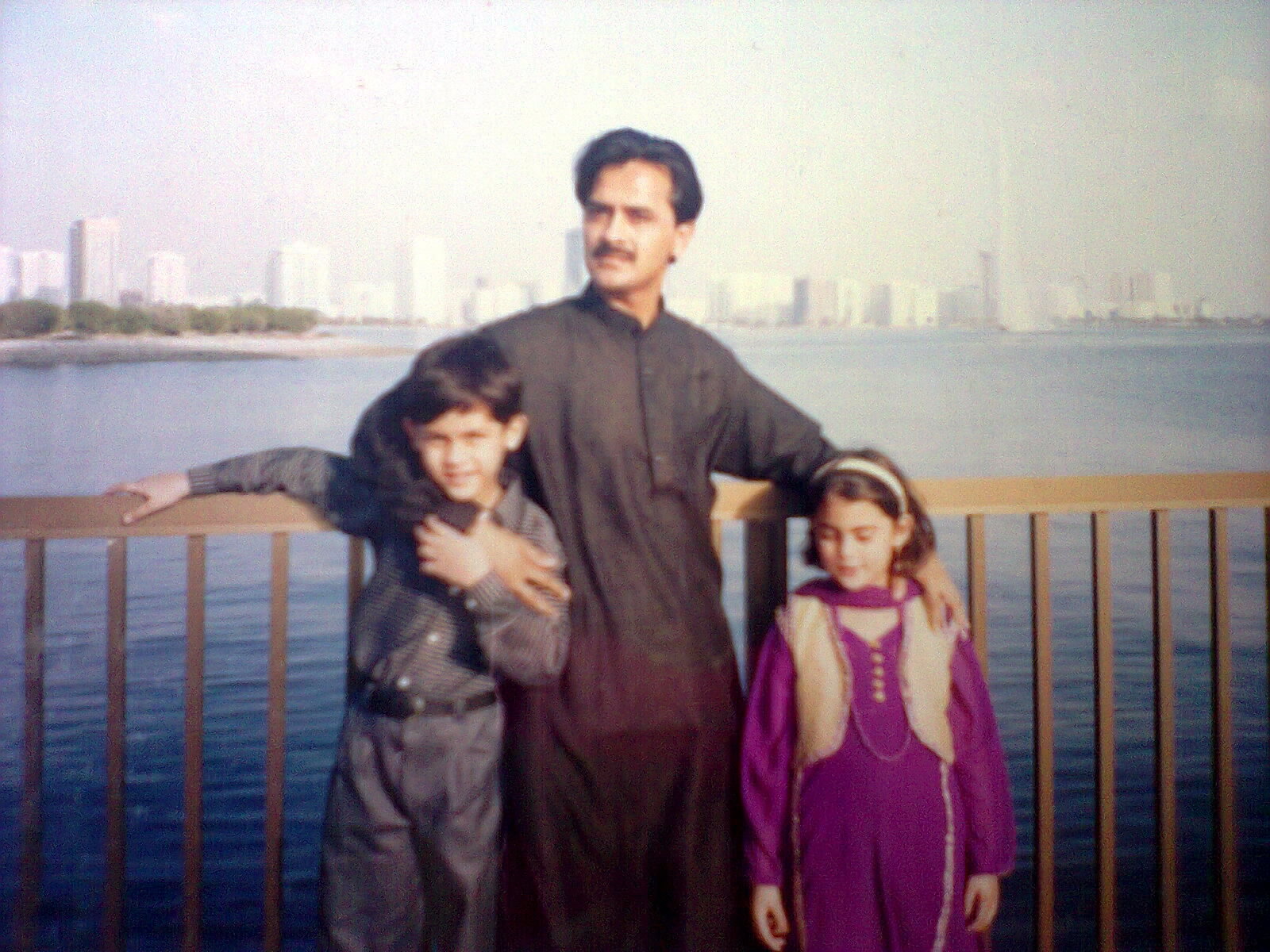 Image of the author aged 6 (right) with her father (centre) and sibling (left). Photo by author’s mother.

In a staunchly traditional extended South Asian family, my father never deemed marriage to be an issue of discussion in our home, despite my aunts and uncles discussing their pubescent daughters’ proposals and weddings. If any of my parents’ relatives or acquaintances ever asked for my hand in marriage, my father always told them that my marriage or non-marriage was completely up to me, and that if they had any queries, they ought to get in touch with me instead.

During my adolescence, we met with hardships of both the financial and familial nature. Despite our borderline poverty, my father never regarded money or misfortune to be barriers. He always told me that I should keep moving as long as I was able to breathe. During the economic depression in Karachi, an aftermath of ex-Prime Minister Benazir Bhutto’s assassination, the majority of my father’s patients stopped visiting his clinic so frequently because they were struck by the inflation gripping the city. Through this period, my father kept himself busy with household chores instead, setting yet another example for us.

As soon as I entered university and experienced first-hand the corruption and degradation of public education, I aspired to pursue my education abroad, where I could learn through practical experiences alongside classroom education. As I browsed through catalogues for foreign universities online, my first instinct would be to click on the tuition fees and scholarships section to see how much the education would cost and whether I was eligible for complete funding or not. When I finally found a programme I wanted to pursue, I told my father I could not apply because it was too costly. He told me to get accepted first and that afterwards we would sit down and discuss my financial options. We were, at this point of our lives, living on 500 rupees per day, which is approximately $4.32.

Once I started receiving acceptances from virtually every institution I had applied to, my father was the one who quite miraculously managed to take out loans for me. He was the one who convinced my mother that a quality education, rather than marriage, was the way forward for his daughters. My mother, who herself had never been educated beyond the 10th grade, sold all her jewellery so that I was able to be where I am today. Indebted is a very small word to describe how I feel towards her.

And so, I came to a strange country, a continent-and-a-half away from home, all alone, without any friends or relatives waiting for me at the other end. I was a girl who had never stepped out of the door of her house without a parent or guardian before, and I was now navigating entirely unknown territories on my own – and making it through just fine. It was like I had had wings all those years in my room back in Karachi, and they had suddenly unfolded, spreading out at my back, their brightness lifting me upwards. Whereas I used to walk a grand total of approximately 200 metres every month, going from the house to the car and from the car to a shop, I now average 90 kilometres of brisk walking every month. This is an act of gratitude for the opportunity of just being able to go out freely into the world feeling secure, especially as a young woman.

As I near the end of my degree programme and have newer obstacles to overcome (like finding work in a country where I don’t speak the language), I have my father’s words of wisdom which comfort me every day. He, too, came from an underprivileged background yet made something meaningful of his life. He overcame his difficulties and woke up with renewed optimism and energy each morning. He, too, was born without a silver spoon and yet persevered, becoming living proof that a mixture of kindness and determination can take one ahead in life. Therefore I, too, can get through the unpleasant days – because I am my father’s daughter.

A Pakistani journalism graduate, raised in the Middle East, dabbling in the fields of gender and diversity in Germany. Loves to read, cook and bake when not thinking about career options as someone at the intersection of gender, class, ethnicity and religion.