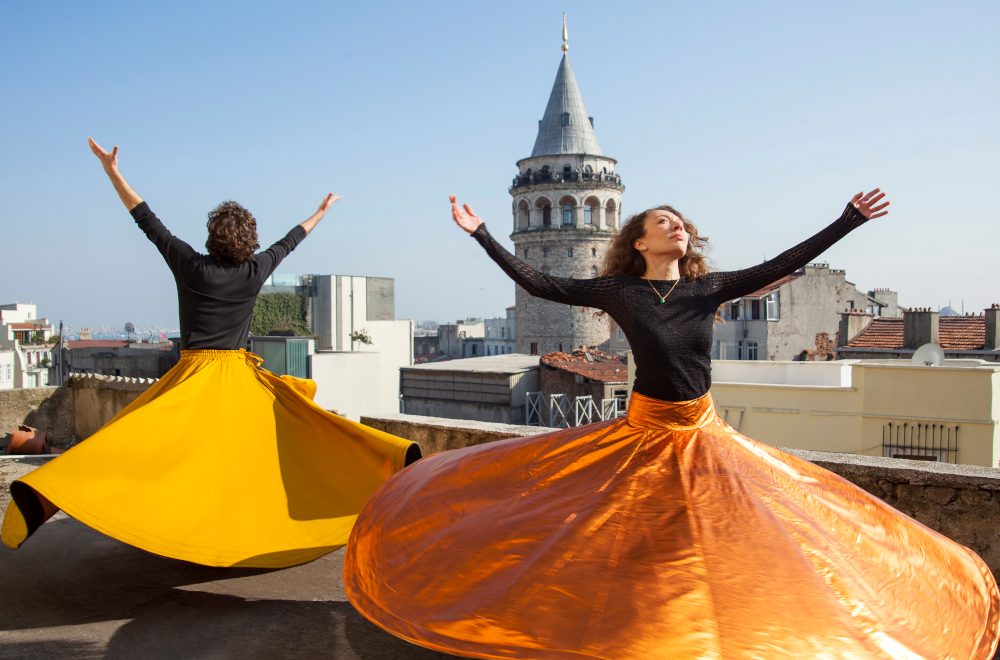 The whirling women of Istanbul

Come, come, whoever you are.

Ours is not a caravan of despair.

Come, even though you have broken your vows

Come, and come yet again.

This famous poem invites women – just as much as men – to the Sufi tradition. But have women been able to take up this invitation?

The Mevlevi Tradition and Sema

The Mevlevi Path was formed 750 years ago through the teachings of Mevlâna and his spiritual mentor, Shams of Tabriz. The Path still continues to preserve Sufi traditions and rituals. Placing the love of God at the heart of its thought, the Mevlevi Path is currently known worldwide through various principles and practices. Some of these are dhikr, the purification of the heart by remembrance of the name of God; muraqabah, Islamic meditation – and of course sema, the ceremony of the so-called ‘whirling dervishes’.

More specifically, sema is a ceremony of meeting with God, love and the divine by escaping worldly consciousness through a transcendental whirling dance and chanting.  Women’s involvement in sema has historically been a subject of debate. Some say that sema can only be practiced by men, while other sources claim that both men and women can participate in whirling ceremonies as long as they do it in separate groups. Despite these discussions, it has also been claimed that men and women whirled together in the 16th century.

Moreover, since the founder of this tradition, Mevlana, did not exclude anyone from his path, then who would have the right to deprive women of sema, or to say that they cannot do it? Indeed, in Turkey, there are female whirling dervishes who share the same stage with men, and who believe that womanhood is not an obstacle to God’s love. Let’s get to know more about these women.

Meeting the women who whirl

Didem Andaç is known as the first female whirling dervish in the Republic of Turkey. Andaç, as a student majoring in photography at the Mimar Sinan Fine Arts University (Istanbul) back in 1983, attended the Galata Mevlevihanesi (Galata Mevlevi Lodge in Istanbul) to watch a sema ceremony and to take pictures. She was so impressed by the ceremony that over time, she started to frequent the Mevlevi Lodge more and more often, and to participate in the conversations.

Andaç found a sense of connection with the spiritual doctrine of the Mevlevi Path to the point that she began to wish to practice sema herself. She started her training in whirling with the support of the Mevlevi Shaikh. She appeared for the first time in November 1993, exactly ten years after her first encounter with the Mevlevi tradition, joining men on the same stage for a sema ceremony. Claiming that everyone is equal in the eyes of God and that there is no discrimination between men and women, Andaç says that she will follow what she believes, despite any opposition.

When the news of Didem Andaç, a female whirling dervish began to spread, many other women contacted her saying that they also wanted to participate in sema ceremonies. Sevtap Demirtaş was one of them. She took sema lessons from Andaç whilst training her voice for the chants. Demirtaş, who claims that sema is a journey to one’s inner world and essence, says that it is not important whether the people around are men or women at the very moment one communicates with God.

Cemre Genç is another woman who started performing sema at the same time as Andaç. As a young woman attending the Mevlevi Lodge to socialise, Genç started her sema training at the Shaikh’s invitation. She went on the stage for the first time in April 1995, describing it as like being reborn. She says that in the Mevlevi order, what matters the most is the essence of human beings, not their appearance, and that therefore no one can be deprived of meeting the love of God and discovering his/her own essence.

These inspiring and courageous women show the world that nothing stands between God and his people. They remind us that the inequality between men and women is a socially constructed concept by people, a discourse grounded in hate and exclusion, not by religion, nor by God. So let these women whirl and contribute to the Mevlevi tradition.

Tugba Gokduman is studying her master’s degree in Gender Studies at EHESS Paris (The School for Advanced Studies in the Social Sciences). She writes articles for feminist magazines.