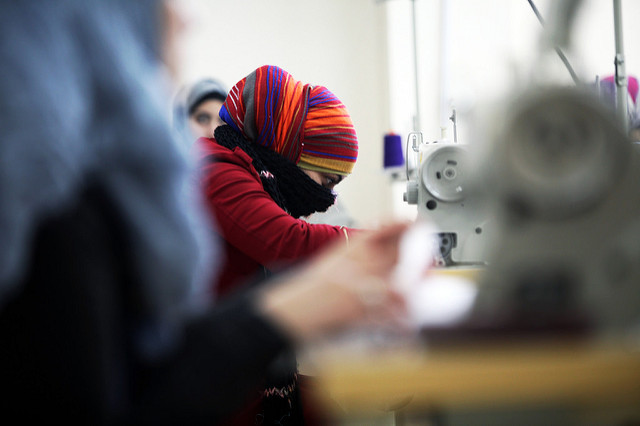 The exclusion of women in Jordan

Despite efforts to eradicate all forms of discrimination against women, the wage-gap, limited social mobility, restricted ownership and agency, poverty, poor political participation, health issues, male violence, and the infanticide of girl children remain challenges in the Arab world. To fight sex-based discrimination and marginalisation, some countries have drawn up plans and implemented reforms in order to help eradicate the discrimination that feeds into gender discrimination and which naturalises marginalisation and exclusion. Yet men still enjoy a disproportionate share of society’s resources, rewards and privileges, and women are still ‘othered’, defined by patriarchy and enclosed within binary sex roles.

Women are deprived of equal opportunities in education, freedom of choice and the ability to use their talent. These are not just indicators of the subjugation of women; these are also the tools that perpetuate the continued marginalisation and exclusion of women and girls. Unfortunately, attainment of such core principles of equality between the sexes in the Arab world is currently impeded by many factors.

The first is the fluidity of both discrimination and marginalisation. Although gender disparities have been delimited in some countries, they ‘vernacularise’ (i.e. normalise) themselves in many others. At times, these disparities may be camouflaged by deformed regulatory frameworks, socialisation and ‘imperial’ ideologies. The gender disparity narrative has been conceptually and technically inflected by international geopolitical power relations in a context of globalist context. This has naturally affected the international efforts to (re)imagine and (re)theorize discrimination, and the marginalisation and subjugation of women. Women activists and scholars may encounter a double distanciation in their efforts to counter gender disparity. On one hand, they are distanciated by a globalist narrative, which is embedded in the history of imperialism. This narrative politicises the urgency of women’s rights issues in the Arab and Islamic world through enveloping them within colonial fantasies. On the other, they are distanciated by the patriarchal nationalist power relations that de-politicise the urgency of women’s basic human rights issues through a politics grounded in a post-colonial, nationalistic narrative. This has affected how gender disparity has been addressed, negotiated and countered by NGOs and civil society organisations (CSOs).

The second factor is directly linked to the current turmoil in the region. Jordan has found itself at the receiving end of the human disaster emanating from the militarism and chaos in the region. Jordan has seen an influx of refugees due to the deterioration of security in neighbouring countries. This has side-lined other important issues, including women’s empowerment, rights and the fight against gender disparity.

The third factor is the paradox posed by the political stance of many Western countries towards Israel. While many Western states advocate the full and unconditional liberation of Arab women from discrimination, violence, and patriarchal attitudes, there is near-silence when it comes to the emancipation of Palestinian women from Israeli occupation. This paradoxical stance has left many in the Arab world not only deeply upset by what they see as double standards, but also suspicious of the World’s agenda in ‘liberating’ Arab women. Within Arab states, nationalistic and religious discourses are deployed to de-prioritise calls for gender equality. This frames women’s empowerment as ‘colonial’ and as a betrayal of religion, tradition and indigenous cultures, placing the fight against discrimination, marginalisation and subjugation of women in opposition to nationalism and patriotism. Consequently, the effort put into international women’s rights projects yields selective and fragmented results, and risks creating disillusionment and backlash.

The fourth factor is the hundreds of thousands of refugees seeking asylum in Jordan. This has fragmented the scope and attention of CSOs and NGOs, who have found themselves in an ambivalent situation when countering disempowerment of women and girls. Instead of focusing on a new trajectory of fighting disempowerment – one that is inclusive of the Syrian refugees – they have been driven into compartmentalizing attention and deleveraging resources. The financial and material resources available to Jordanian women activists who support women – both Jordanian and Syrian – are limited. The competition for such resources has been divisive.

Fifthly, although there are many significant studies on gender disparity, studies on the underlying structures and intrinsic layers of marginalisation and exclusion targeting women and girls are unsatisfactory. There are serious gaps in studies and knowledge-building, as follows:

A woman’s ‘best choice’ of lifestyle remains marriage and child-bearing. Her worst fate is to be killed in the name of ‘honour’. Being a woman is often a perpetuation of biologically-determined subservience and victimhood.

The school learning environment is the first public platform where gender identity is socialized. I recently conducted a study of how women and girls are represented in textbooks. Female founders, scientists and reformists are almost completely erased from history; their contribution to state or nation building is completely ignored. They are expunged from the Arab and Islamic memory and the records of scientific advancement. Men and boys occupy all public and private spaces in the current Arabic and Social Studies school textbooks. Women and girls are ghettoised in the house, the garden and the school. Textbooks narrate history, science, technology, knowledge, homeland, citizenship and democracy from a male perspective. The scholarly pen, the scales of justice and the ploughs of industry are placed in the hands of men. Meanwhile, the stories of women and girls are told in their absence, represented through sub-texts, stereotypes and in passive contexts.

A generation that is torn between slogans of equality on the one hand and the practices and performances that are rooted in gendered inequalities on the other might lead to revolt when its own belief systems are threatened by the contradictory realities of women’s and girls’ engagement and inclusion. We need to revisit the world’s benchmarks of the universal rights and reassess its criteria and measurement to expand its satisfaction into measurement of gender-related disempowerment, marginalisation and exclusion in actual lived realities. We need new paradigms through which older, familiar binary disputes can be broken down and re-imagined in ways that highlight the values of equal inclusion.