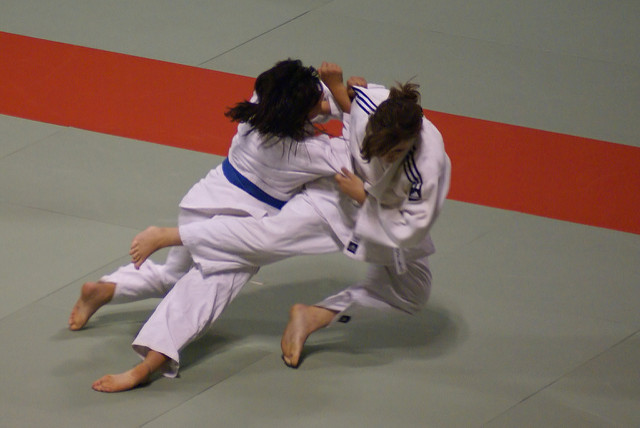 Taking advantage of her small but sleek frame, she entered the crowded lift without hesitation, in spite of some people who were shaking their heads. She didn’t give it a thought: she knew the lifts were always packed and she’d have to wait a long time otherwise. ‘I’m not going to hang around waiting for another lift to come!’ she protested (in her mind).

Ding…! The lift came to a halt; bounced with a thud; the doors screeched open, as though they too, had had enough. Nudges and pushes indicated that people wanted to exit. She moved from side to side to give way. As they passed, they whispered ‘thank you,’ ‘excuse me’ and ‘sorry’ with polite, apologetic smiles.

Ding…! The lift door closed and she sighed with relief. Two other people remined in the lift with her. She glanced over at the panel; it was lit for the basement parking, indicating that they were all to get off on the same floor.  She was searching in her bag for her keys when something caught her attention. The guys, who were tall, of medium build and wearing hoodies, were standing directly on either side of her. As this dawned upon her the atmosphere became intense: her heart skipped a beat – then it started racing – fast. Her palms became sweaty. She felt her heart throbbing in her head. She felt the pressure of adrenaline in her face and shaking legs. There were goosebumps on the back of her arms and legs. Something unpleasant was going to take place.

Within seconds the situation changed. Her nerves were blaring like fire alarms. She quickly got a grip over herself, and stood up straight and alert. Mr. Right had grabbed her bag by then and jerked it. She did not plan on letting them take it. A stupid move. A woman wouldn’t have a chance. She would only encourage more violence towards herself. Who knew what they were capable of?

A sharp pain ripped through her left shoulder. She threw a calculated punch, a jab under the ribs with her right fist. This startled Mr. Left and shocked Mr. Right. The goons didn’t realise the situation until it was too late. They would never mess with a girl again. Ding…! The door closed and she looked over her shoulder and walked away.

I know this was not the ending you expected. It could have easily been the other way round. Too often it is. So how can we women stop the attacks on us?

Invest in your safety: As women, we experience catcalling, being followed and even stalked. This has become routine for most of us. Some of us have just accepted this behaviour as a part of our lives. We have become desensitised: we not only experience this ourselves but see other females go through it. But in reality, these are intimidating experiences. Women deal with their personal space being invaded in public places on a daily basis. When women are accompanied by a man, however, the situation is very different. Then, predatory men learn how to mind their own business. This is hypocrisy at its finest. Men know it’s not right, but they don’t care enough to repress their selfish desires. (Although there are lots of men who are real gentlemen and who are concerned by the behaviour of their fellow men.)

Invest in yourself by learning self-defence. Teach it to other women out there. Spread this like wildfire.

Join a martial arts club: It doesn’t matter if you’re not fit or if you are overweight or have health issues, just join the damn club! They are there to help and guide you, and will take your personal health issues into consideration.

Stop making excuses: Excuses are a form of fear. Fear rears its ugly head if you even think about getting out of your comfort zone. So, don’t think: just do it. Your excuses might not be good enough. As an experiment, try saying them out loud and see how it makes you feel. If you have emotional or physical issues, learning a martial art could reduce stress and ill-health, helping you to deal with life in a healthy and positive way, with a strong mind to go with it.

Go to women’s only classes: If you’re feeling self-conscious and it seems like it’s nearly impossible to get into the right mind-set then find out if your local clubs cater to women and have female instructors. They almost certainly will. Before signing up, visit a few clubs and sit in on one of their classes to see where you feel most at home. When you do, then sign right up!

Check your options: If you can afford it, I would recommend you go to a club, and ask or check online to see if someone is offering a service to teach you martial arts at home. As a mother of five, I would personally prefer this service, since I’m not able to leave my kids with anyone, having no family around me.

Take precautions: Enough of letting everyone tell you to be home before dark! Carry a pepper spray or whatever self-defence mechanism is legal in your country. It’s good to be careful but until you have another way of protecting yourself you’re better safe than sorry! But these measures won’t necessarily work if you’re scared and paralysed with fear, will they? Yeah, have a long think about that, because I know I wouldn’t be able to do a thing except maybe try to run, God forbid!

Women, martial arts should be part of your education. It is your right. Its time you reclaimed your birth-right (I’m not exaggerating) and become a shining example to your fellow sisters, to break the myth and to invest in yourself.

I spread optimism and positivity through my writing, empowering women to understand the crucial role they play in society.