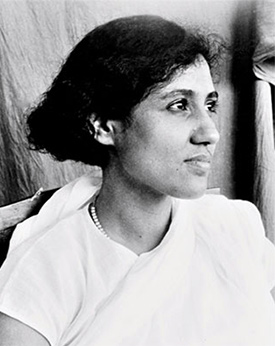 A man thinks as long as he has given a woman food and clothing he has done enough. The more conscientious husband would think he is being fair if he spends one night with one wife and the other with the second. As though wives were mere toys for their husband, he can play with either one he fancies. And who is to blame? What if the two women were to unite? What would the man do then?

Rashid Jahan was a doctor, writer of short stories and plays and a pioneer of radical writing about women. She is believed to have written around 25-30 short stories and 15-20 plays. She was a prominent member of the Communist Party of India and one of the founders of the Progressive Writers Association.

Rashid was the eldest daughter of Sheikh Abdullah, who was a lawyer and social reformer, and his wife Begum Wahid Jahan. Sheikh Abdullah founded the women’s college at the Aligarh Muslim University where Rashid received her early education. He was also the secretary of the women’s education section of the All Indian Mohammadan Conference, and the founder of Khatun, an Urdu language journal for women. Rashid grew up in a lively intellectual atmosphere at home, with visitors including Zehra and Atiya Faizi, and benefited from a modern education at Aligarh Muslim University. Compared to other young women raised in high-status families, Rashid was distinctive for her plain manner of dress and direct manner, and a lively and charismatic personality.

After finishing her studies at Aligarh, Rashid moved to the Isabella Thoburn College in Lucknow for three years, where she was involved in several extracurricular activities, such as sports and drama. She then trained as a doctor at the Lady Hardinge Medical College in Delhi, a Christian college which taught literature alongside medical studies. It was here that Rashid wrote her first story.

After graduating, Rashid joined the Provincial Medical Service of the United Provinces. After serving as a medical officer in Bulandshahar, she was posted to Lucknow. It was here she joined Angarey, a group which was dedicated to the discussion of socio-political issues. The other members were three young men, all graduates of Lucknow University. It was through the influence of this group that Rashid was increasingly drawn towards communism and became more outspoken in her criticisms of imperialism.

In 1932, Angarey released an anthology of ten short stories which was to create uproar for their criticisms of Islamic orthodoxy. Rashid had contributed a story and a play. As a woman, Rashid became targeted by conservatives, bearing the brunt of their ire and becoming a representative of the group in the popular imagination, not least because she had had the courage to discuss sexual matters directly – which was taboo for a woman. For this, she and her family were harassed, but Rashid remained defiant.

Considered immoral due to the influence of their Western education, all four Angarey writers were subjected to personal criticisms. The book was banned, and copies were burned. All but five original copies were ultimately confiscated and destroyed: currently, three remain in the National Archives in Delhi and one was sent to the British Museum. Nevertheless, Angarey was to define and invigorate the radical consciousness in the sub-continent for decades, challenging both colonialism and communalism. Angarey also led to the formation of the Progressive Writers’ Association in 1936 in Lucknow.

In 1933, Rashid joined the communist party. She also married Mamudazzafar, one of the Angarey members, in the same year, becoming a ‘power couple’ within India’s radical circles. Rashid was invested in countering the sexist backlash to India’s social changes. Rashid’s plays were broadcast on the radio, reaching a wider demographic, including those unable to read. Most of these recordings have been lost. Her most prolific period as a writer was between 1938 and 1942, when she was published widely in political journals. Rashid’s efforts made her best known as a writer of fiction, but she also worked as a journalist, editor and translator.

As a doctor, her contact with women of different classes informed her politics and her writing, which was anchored in the physical realities of women’s experiences. She discussed taboo subjects such as the effects of bearing multiple children upon women’s health. As an activist, she was interested in using modern technology to reach audiences from all social backgrounds and wrote scripts for radio broadcast. The common themes were exposing private injustices within Muslim households to the public, foregrounding women’s experiences within a variety of social milieu, and on how patriarchy impacts relationships between women.

From 1950 onward, failing health limited her activities in activism. She died at the age of 47 in Moscow, where she was being treated for uterine cancer. Her tombstone in a Russian cemetery read ‘Communist Doctor and Writer.’ Her last words were ‘I am sorry only for one thing – that I did not live to see even one little corner of India free.’