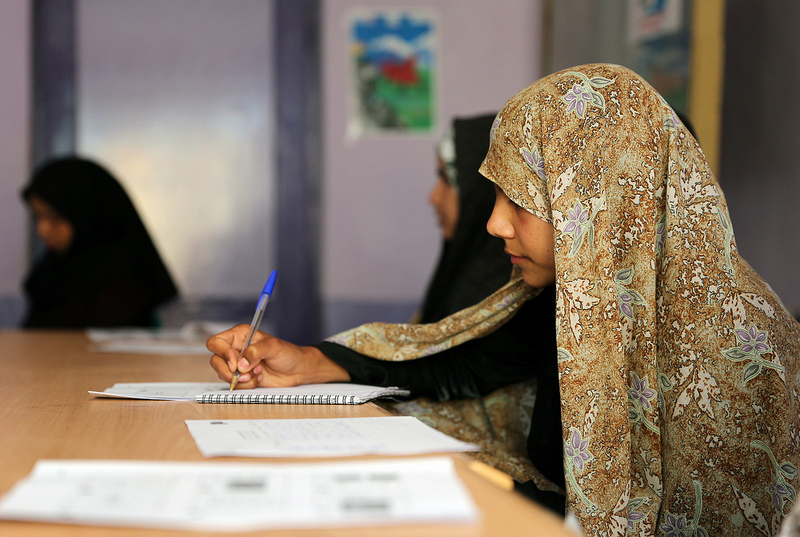 Now is not the time to abandon Afghan women and girls

Last month, President Trump announced a new military strategy to defeat the Taliban in Afghanistan. The announcement was light on detail about how this ‘victory’ would be achieved – but one key element of the announcement, which received little attention is the issue of Afghan women’s rights –specifically, the removal of concessions to guarantee the human rights of Afghan women and girls. A resurgent Taliban is likely to have devastating consequences for the freedom and rights of Afghan women and girls. Are these hard fought for rights really to be sacrificed in the pursuit of successful negotiations with the Taliban?

It was widely reported that Trump was ‘talked’ into boosting the military effort in Afghanistan after being shown an old photo of Afghan women in Western clothing. According to the Washington Post, National Security Advisor, H.R McMaster persuaded Trump that Afghanistan wasn’t a hopeless cause – to support his case, he showed his boss a 1972 photo of Afghan women in miniskirts in order to show that the country had once adopted Western values. If Trump could succeed where no one else had, and emerge as a glorious liberator, a renewal of the war effort would be worth American blood, sweat and tax dollars.  For a President obsessed with popularity ratings – this must have been an attractive proposition.

However, in a marked departure from his predecessor – the Trump administration made it very clear that the talks would not be tied to any conditions on the rights and freedoms for women and girls.

At a separate press briefing, Rex Tillerson, the Secretary of State, was asked by journalists if the new approach would entail a firm commitment to Afghan women. Here’s his response:

When we say no preconditions on the talks, I think what we are saying is, look, the Government of Afghanistan and the Taliban representatives need to sit down and sort this out. It’s not for the U.S. to tell them it must be this particular model, it must be under these conditions, ….no safe haven for terrorists to operate anywhere in Afghanistan now or in the future.

The explicit reference to there being ‘no safe haven for terrorists’ reaffirms America’s overriding objective, which is, ostensibly a continuation of its ‘war on terror’. The U.S is willing to offer a place at the table to a brutal regime responsible for widespread human violations and abuses, but there will be no ‘seat’ for women. Instead, Tillerson, leaves the thorny issue of protecting women’s rights to a grim coalition of religious fanatics and government apparatchiks to ‘sit down and sort out.’

Life under Taliban rule was particularly harsh for Afghan women and girls, who were systematically discriminated against and marginalised. Girls were banned from attending schools, while access to education, healthcare, and employment were severely restricted. Afghanistan had high maternal and child mortality rates and a very low literacy rate for women, as well as high levels of gender related violence. In 2011 it was called  ‘The most dangerous country for women.’

The Obama administration fought long and hard to ensure that women’s rights were central to Afghanistan’s successful transition towards peace. Since the fall of the Taliban, modest gains have been made in securing social, economic and political rights for women and girls. The Constitution affords equal protection to men and women, guaranteeing women the right to education, political participation, and economic opportunity. Women now hold 27 percent of the seats in parliament and school enrolment has increased 10 times since 2001, with over 8 million students enrolled in schools, 39 percent of whom are girls.

In his press briefing, Tillerson, acknowledged that significant progress had been made in some areas, saying that ‘there’s been enormous strides achieved in Afghanistan, both in terms of the numbers of millions of children that are now in schools being educated, the role of women in the Afghan economy now has been dramatically changed. I don’t expect any of that to be rolled back…’

But, in an act of self-inflicted moral blindness – Trump officials have formed a view, that somehow, the goal of achieving basic human rights is incompatible with tackling violent extremism.

Trump is no supporter of women’s rights and it may have been a moment of hegemonic nostalgia on his part. However, McMaster’s deliberate tactic to use a photo depicting Afghan women in Western clothing is much more in keeping with a familiar propaganda tool. One that plays well with Western audiences already sensitised to images of Muslim women oppressed by Islamic fundamentalism and Sharia law.

The U.S and its allies have repeatedly used the oppression of Afghan women as a key justification for fighting the Taliban. Securing greater freedom and rights for Afghan women and girls was a key political objective used by the British and American governments to sustain the military presence in Afghanistan. In 2001, U.S Secretary of State, Colin Powell stated that the restoration of the rights of Afghan women would be key to the recovery of Afghanistan, and that these rights ‘would not be negotiable.’ Tony Blair, the British Prime Minister declared, ‘no one would be abandoned’.

Promoting gender equality is vital to sustaining economic and political stability in post conflict nations. Countries are more peaceful and prosperous when women are accorded full and equal rights and opportunities. The countries that lag behind are often those that seek to deny women those rights and freedoms.

The fall of the Taliban in 2001 heralded a new beginning for the country. As part of the stabilisation agenda, Western allies promised to commit resources and efforts toward restoring the human rights of women and girls.

International reconstruction efforts now include a package of programs and reforms to support women’s development. However, it is often difficult to quantify the exact amount spent on gender equality and the effectiveness of such programmes. This is partly due to the fact that gender targets are often tied to the achievement of other significant strategic outcomes, such as education and health improvements. Nonetheless, there is a multitude of bilateral funding packages which have gender equality as an explicit component of foreign aid.

It is estimated that Afghanistan has received 60 billion dollars in aid and is still the largest recipient of U.S aid, most of which is spent on conflict prevention and security. According to the website www.foreignassistance.gov  – the U.S spent 7.14 billion in 2016 and the planned amount for 2017 is said to be $4.7billion.

The NGO, Public Radio International estimates that 20 percent of this aid will go towards supporting gender equality. U.S aid efforts are further bolstered by further international donor assistance. In 2016, The European Union committed $5 billion package of aid. However while there are some encouraging developments in key areas Afghanistan continues to be seen as a dangerous place for women.

The UN recorded 1,662 civilian deaths and 3,581 people injured in the first half of this year. Armed conflict has claimed the lives of 26,512 civilians and injured 48,931 since 2009. As with all conflicts, women and children pay a much heavier price.

Human rights organisations have criticised the Afghan Government’s lack of progress on protecting women’s rights. About a third of girls marry before the age of 18 and according to Action Aid, a staggering 87 percent of women have experienced domestic violence.

Over a third of the population live below the poverty line and the country is ranked 169 of the 188 on the Human Development Index and 154 on Gender Inequality, indicating the scale of the development challenge.

Afghanistan has been ravaged by decades of conflict and war. Western forays into this country have never ended well. The current plight of Afghan women cannot solely be attributed to a failure of foreign policy alone. The battle for gender equality and human rights has to contend with a society steeped in a culture of patriarchy and tribalism.

It is widely accepted that women have a vital role to play in the prevention and resolution of conflicts. In 2000, the UN adopted Resolution 1325 which ‘urges all actors to increase the participation of women and incorporate gender perspectives in all United Nations peace and security efforts’. It also calls on all parties to the conflict ‘to take special measures to protect women and girls from gender-based violence, particularly rape and other forms of sexual abuse, in situations of armed conflict’. The resolution provides a number of important operational mandates, with implications for the Member States and the entities of the United Nations system. The issue of human rights should be a non-negotiable matter.

The U.S Aid transition plan for 2015-2018 acknowledges the importance of continuing support for gender equality, and despite the public statement made by the U.S Secretary of State, the department’s foreign assistance request to Congress for 2018 includes a significant amount of funding for gender related programmes – although it remains to be seen if Congress will approve the funding.

The Trump administration should honour the commitment of its predecessors and abide by UN Resolution 1325 to ensure that the human rights of Afghan women and girls are not up for sale. A rebranded Taliban, with the tacit approval of the U.S. could easily erode the hard-fought gains made by Afghan women and girls and send gender equality back to the dark ages.

On the one hand, the U.S strategy for Afghanistan is farsighted in calling for regional cooperation from Pakistan and India – however, its lackluster approach towards addressing the concerns of women, who form nearly half of the population, is a myopic fail.

America cannot wash its hands of its responsibility to protect women and girls and leave them to be used as a bargaining chip in a very dangerous game.

This is a critical juncture for the U.S. not just in military terms, but also for the fate of millions of Afghan women and girls, whose future, for better or for worse, is tied to President Trump’s endgame for Afghanistan.

Afsana Lachaux is a former UK senior civil servant and was appointed to work with the Government’s Stabilisation Unit as a Governance expert advisor.