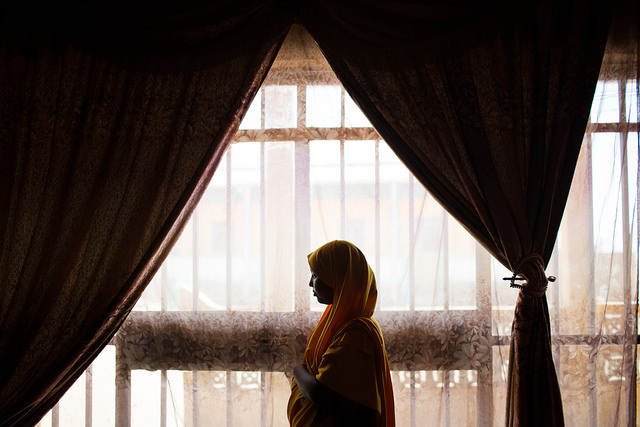 My voice against FGM

At five years of age, I underwent Female Genital Mutilation/Cutting (FGM/C). As a grown woman, it’s been a challenge to understand the experience that I went through at that age. Over the years, I have asked many questions, like ‘Why was it done to me?’ and ‘What would it have felt like if I had never had it done?’ Although my personal experience was not as painful as some of my peers, I would not want any person to go through the same abuse that I experienced. Many women with similar experiences have also felt violated, because they never gave their consent to what was being done to their bodies.

Mothers and elder women attended the first event. Some of the older women declared that they wanted to continue this harmful practice, justifying the need for it through religion. Some women even went to the extent of finding a religious leader who would back their decision to cut the genitals of their young daughters. Personally, while I was listening to their stories, I was shocked to hear about the horrible experiences some of them had undergone with their FGM/C, and stunned that they still continued to support the practice. They did so because they believed that their girls would miss out on an experience that was important to their culture. It amazed me that even though FGM/C is not a practice of faith (which I learned through research), culture in itself is a powerful factor in shaping how we live. Older women in particular were under the impression that FGM/C must be continued.

During the second event we invited young Somalis so we could speak with the younger generation on the issue. Some youths knew what FGM/C was, but some, I was surprised to learn, had never heard of it. The two youngest girls, aged sixteen and seventeen, had no idea what FGM/C was and hadn’t undergone it. I believe this shows that change is happening here in the United States. I was glad to hear that not all mothers believe it is necessary to have their daughters undergo FGM/C. Despite knowing that it had happened to me and that it still happens to girls younger than me, I was reminded that the progress of deinstitutionalizing FGM/C is ongoing.

As months went by, I began to do more research on the topic on my own. I came across a news article of an event that took place in April 2017: a female doctor was charged with performing FGM/C on minor girls. There are many more instances of FGM/C occurring in the United States that are not covered in the mainstream media, but happen secretly.

When I came to America from Kenya at the age of ten, I thought that this country was a place of safety and security for me and my family, as many immigrant families do. I was shocked to learn that some American born women also experienced FGM/C.

In May 2018, I participated in a digital storytelling workshop organised by two NGOs, Sahiyo & StoryCenter. The workshop opened my eyes to the injustices happening here in the States. It centered around bringing women from different ethnicities together to share their experiences of female genital cutting. For a long time I had believed that FGM/C was solely an African practice, but the workshop taught me that I was wrong. FGM/C is a global issue affecting different women from diverse backgrounds. In the United States, it is estimated by the Center for Disease Control that half a million girls and women are at risk.

Soon after the workshop, I was motivated to start a petition on change.org to Ban Female Genital Cutting in Massachusetts. I wanted to make a statement against Female Genital Cutting (FGC) in the hopes of changing the lives of future generations of young girls around the world, ensuring they would never undergo the procedure. I believe that no woman should have to experience this dehumanizing experience. I want to make sure that my future children and their peers are protected against this kind of child abuse.

Aisha Yusuf is a twenty-nine-year-old female from Somalia, residing in Boston, Massachusetts with her family. She considers herself an activist on many issues including women’s rights, poverty and economic injustice, child welfare, healthcare reforms, and racial injustices. During her leisure, she enjoys reading, hiking, traveling, working out, and cooking healthy foods.