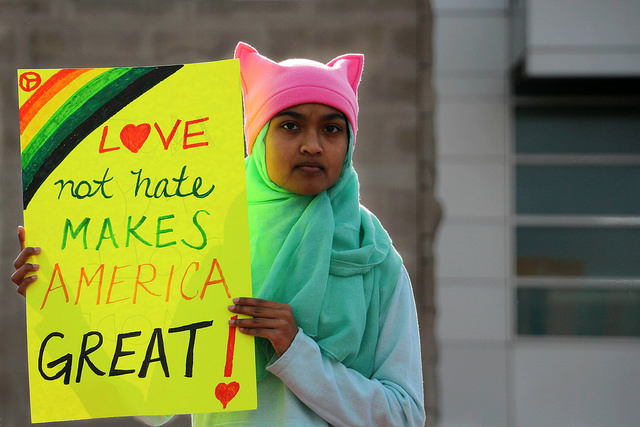 Despite the current emergence of an activist feminist movement, formed in response to the election of Donald Trump, there seems to be a strange rift being created between women. We are at each other’s throats, and struggle to find common ground. One major rift undermines women’s support of the Women’s March movement.

The issue which has emerged – well, it’s less that it’s emerged and more like it’s become louder recently – is the blatant anti-Semitic rhetoric expressed by the current march leaders. It’s disturbing that there seems to be a new trend whereby a person is automatically considered Islamophobic if they stand up against anti-Semitism.

For me that was a ‘Wait, What!?’ moment. I am a Muslim woman who was born and raised within a Hasidic Jewish community in Brooklyn New York, where I also attended Catholic school. Yes, it’s an eclectic background, and one in which I never once saw hatred nor an us-versus-them situation, even though we were the only Muslims within the whole entire neighbourhood for about a decade and a half. So to me, anti-Semitism just wasn’t something I was raised with at home.

On the other hand, I can honestly say I saw more Islamophobia from ‘fellow’ Muslims than from any outsider. And what I mean by putting ‘fellow’ in scare quotes, is that they appeared to be a genuine fellow Muslim – right up until they decided to bring up these racist and hateful notions.

I had never heard of hating a Jewish person for being Jewish within Islam. This made no sense to me: Muslims aren’t really built for hatred, not according to the actual spiritual essence of our religion. I mean there are two major rules, which I feel like I’ve been repeating like a broken record recently: firstly, you are not allowed to judge another person as a Muslim, because only God is allowed to judge. If you decide you do have that right then you have usurped God’s authority. Secondly, there is literally a passage within the Quran that states ‘to you your religion and to me mine’, meaning that no one has the right to infringe on another person’s life because of their religion.

So what am I getting at?

Nowhere within Islam does it tell you to be anti-Semitic, nor does it tell you to be anti-anything really, because you do not have the authority to judge another human being. Also, since we should learn from history so that we do not repeat it, then why are we going in circles and creating a whole new anti-Semitic movement? Do we not remember the Inquisition? Remember Spain, and how the then ruling party ordered the death or conversion of Muslims and Jews. Both Muslims and Jews hid members of the other group to ensure their safety and their freedom to practice their religion. Or even more recently within the past 70-80 years, when a little thing called World War II took place. About six million Jewish people were killed just for being Jewish in Europe during the 1930s and 1940s, a period when anti-Semitism was so catastrophic that regimes had to be toppled to save people’s lives and end a genocide.

So why are we coming back full circle now? Why, as Muslims, are we allowing this hatred to fester and grow within us, when we know the risks? Why are we willing to watch and even participate in this hate-mongering?

It is not against Islam to oppose hatred. Islam itself means peace, and as Muslims we need to start living up to this promise. We need to change the narrative and stand with our Jewish sisters to ensure their safety and freedom. We cannot be cowed by the claim that we are feeding into the hatred of Islam by condemning the hatred of other people. We need to be able to stand up for what is right. That means that the hatred must stop, so that no more people get hurt. Enough is enough.

Egyptian Muslim Woman, born and raised in Brooklyn New York, with a BA in Comparative Religions, an MS in Counselling Psychology, currently working on a PhD in Clinical Psychology.