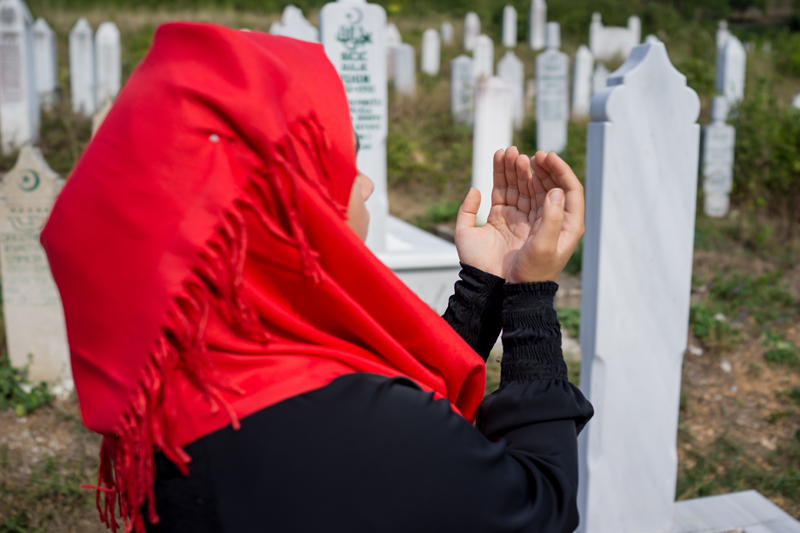 I will be with you in the grave

on the night you leave behind

your shop and your family.

When you hear my soft voice

echoing in your tomb,

that you were never hidden from my eyes.

The above lines by Rumi stimulate my vivid imagination to visualise a beloved’s eternal promise to their lover – of being beside their graveside after they are gone: a wish to transcend physical and spiritual limitations to ensure the lover never feels alone in their grave. In my imagination this beloved is unfailingly a man mourning at the grave of his dead lover. Somehow, my imagination and life experiences constrain me from visualising a woman in the same scene. I apologise to Rumi for taking the romance out of his poetry, but my inability to imagine this scenario perturbs me greatly. I asked myself why that should be.

Perhaps it is my social and religious conditioning that limits my imagination in this scenario. This brings me to the real question – why are we, as women, not permitted to visit a loved one’s grave nor to take part in their funeral? I thought we constituted fifty percent of the population and held up half the sky. So, what is the reason for this exclusion on terra firma? Why is it an anomaly for women to visit a graveyard and to participate in a funeral? We face enough discrimination throughout our lives in matters both professional and personal. Death and grief are not domains which sexism should encompass. But, they are and they always have been!

Recently, after losing someone close, this long-subdued thought resurfaced. I began to look for answers. I questioned, I looked around – but most explanations sounded like gallows humour. The reasons were absurd, ranging from women appearing naked to the dead at the graveyard, to the infamous emotional fragility of women. Initially, I found these explanations hilarious, but then I felt anguished at the blind tenacity with which people have followed these interpretations over time which has allowed them to become labelled as religious beliefs. Looking beyond all these absurdities, I am convinced that these reasons are a by-product of patriarchy and gender inequality. Sadly, much of the discourse that takes place on these topics fails to cover the rights of a woman to be included in the last rites of a loved one, if she so wishes.

Even the most educated and enlightened amongst us find this unobjectionable, so the status quo largely prevails. Under the garb of ‘tradition’ and ‘culture’, women are expected to fit into moulds at various points in their lives. Lamenting the loss of a loved one is not the place or time for that. The freedom to mourn and to attend a funeral are as basic as rights get. One should not have to look for anyone’s approval or validation to be able to do that, whatever one’s sex.

My instant reaction at the cited reasons for the exclusion of women from funerals was anger. Anger at men, for all the entitlement they have, purely due to the sheer accident of being born a man. Once I had taken enough time for my anger to simmer down and to deal with my disbelief at (in my view) the completely illogical explanations, I felt a tinge of empathy for men. I felt this because of the societal pressure on them to not be seen grieving in public, and to just get on with all the funeral arrangements like a trouper. After all, men are expected to exude bravado at all times, even in situations related to life and death. They cannot break down when conducting the last rites for a person they may have held dear to their heart. I label this as gendered discrimination too! We complain about men being insensitive. Why wouldn’t they be, when they are not even allowed to grieve wholeheartedly?

If we are to talk about sensitive men, we must also talk about feisty women. I have been fortunate to know this breed whose instinctive reaction to most discriminatory situations is to fight back rather than conform. Naturally, they are held in contempt and disdainfully labelled as feminists, activists, troublemakers etc. Undeterred, they have participated in the funerals of those that mattered to them, and to whom they wanted to pay their last respects. Even though they were confined to the back rows and were unable to participate fully, I believe that this is a positive step forward. These women have managed to break the boundaries between females and funerals. We need to continue to slam down unreasonable and out dated traditions and claim our space – in both the physical and metaphysical realms.

Atika Firasat works in the field of Learning & Development, is a keen reader and lover of English language, and a community development enthusiast. You can mostly find her with a cuppa in one hand and camera in another. You can find more of her musings on her blog https://thinkclickchai.wordpress.com/ or on Twitter @atika101.