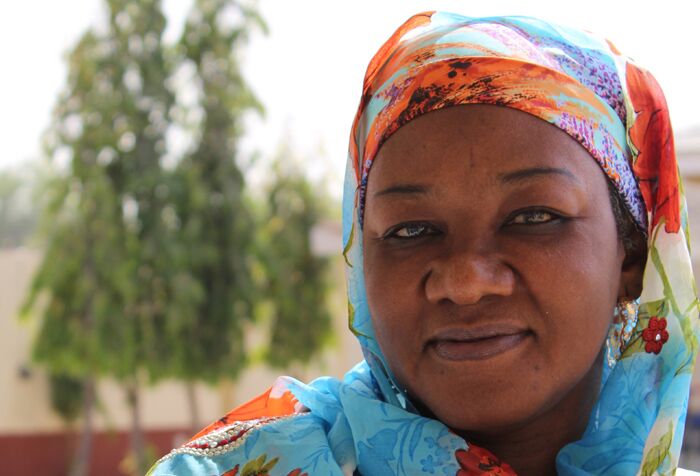 In November 2017, as worshipers were gathering for the fajr dawn prayer at five a.m. in Mubi, Nigeria, a man blew himself up inside the mosque, killing 58 people. He was 17 years old.

Over the past eight years, the violent extremist group Boko Haram – whose name translates as ‘Western education is forbidden’ – has carried out hundreds of deadly attacks on mosques, schools, markets and churches in northern Nigeria, frequently using children to carry out bombings. Women’s rights and peace activist Hamsatu Allamin, the founder of the Allamin Foundation for Peace and Development, decided to take action to change Boko Haram’s widely accepted rhetoric. Allamin aimed to prove to her community that ‘Boko’ is not forbidden, and that true Islam teaches that education is halal and the duty of every Muslim.

She spoke to ICAN’s Aya Nader about the links between education and extremism, her work so far and what comes next.

Apart from the violent extremism of Boko Haram and others that justify it through religion—Islam or Christianity, much of Africa, and Nigeria in particular, is characterized by patrimonial politics and poor governance with institutionalised corruption that thrives on massive stealing from our defence and development budgets. Can’t we call this extremism too? The consequences of this kind of extremism lead to violent extremism. When society and human resource development are neglected, young people become frustrated, and whole communities and sectors of society become excluded. Then they resort to violence.

What made you decide to turn to peace activism?

Violent extremism was completely alien to us as a very peaceful society renowned for Islamic scholarship. We had never witnessed mass violence. Gradually we found ourselves amid this Boko Haram insurgency, started by our own kinsmen in my own community. It is terrible. If anyone tells you they have no relatives, distant or close, who have joined Boko Haram, they are lying.

However, if a part of your body becomes infected, do you cut it off and throw it away, or do you treat it? On this basis, I looked at what happened to the boys in my society. Nobody else was doing anything, so I said that someone has to engage with them. This mad circle of violence has to be stopped. I started my work.

Where does the Boko Haram ideology come from?

We are Islamic communities and my home is the gateway of Islam to Nigeria and West Africa. Even when the colonialists came they were not able to rule us directly. They said northern Nigeria should be ruled indirectly because of the deeply rooted Islamic influence there. So when the missionaries started introducing Western education, they did not try it on us but in places where people were not Muslims. So Muslims grew up with the perception that education was not meant for them but for ‘people without religion.’ That very misperception is what became the ideology of Boko Haram.

What were the factors that led to violent extremism?

I can attribute every factor to General Systems Failure. The structural driver at the centre of all the problems in Nigeria is patrimonial politics. It brings poor governance with institutionalized corruption that thrives on massive stealing from our defence and development budgets. As a result, there is widespread abject poverty and illiteracy and exclusion and marginalization of the greater population of women, youth and people with special needs. Weakened and ineffective conflict management systems are exacerbated by the large porous and unprotected international borders that facilitate the easy movement of people, drugs and light weapons, amongst other items.

Leaders of the large army of unemployed youths have started agitating and voicing their grievances against the inequality and injustices in society through an extremist ideology expressed in a narrative that ‘Boko’ – Western/secular education, is ‘Haram’ – forbidden. They advocate for a return to sharia, the Islamic legal and social system as an alternative that offers justice, morality and freedom from corruption. They condemn everything Western as forbidden. Hence the name: Boko Haram.

They recruited and subsequently empowered, strengthened and emboldened the aggrieved youth. With the escalation of the violence, the government responded with the creation of a Joint Task Force (JTF) of all security agencies led by the military as an immediate response. The situation was mismanaged by the military. Boko Haram lives and operates within communities, so the gross human rights violations and abuses perpetrated in the name of Counter Terrorism Operations expanded the recruitment base of Boko Haram. Young men joined to take vengeance on the Nigerian Military.

How does your work fight extremism?

I reached out to communities where Boko Haram were recruiting. It was very dangerous, but I had to go there and connect with the women. They threatened me at first, but gradually became cooperative, and apologised for their lack of understanding of my intentions. I established a dialogue with them. At the same time, I reached out to the government, especially the security forces. To them, any youth in society is Boko Haram, because when they attack or kill, they then run back to their communities and take refuge in their own houses. So in response, the government burns their houses and arrests all of the young people there without differentiation. The toll was too high, so I had to intervene through rehabilitating and reintegrating communities in which Boko Haram had been operating.

Why is reintegration important and how do you advocate for it?

We have to reintegrate former fighters by introducing intra-community dialogue, by bringing together men and women who are not currently communicating. Women were not viewed as important in issues affecting their communities. We discovered that some of them had found out that their kids were becoming members of Boko Haram and had pushed them even further – and even helped them by storing guns, but had not told their husbands.

We also organised dialogues with schools to educate them about reintegrating children. We talk with the mothers, and we empower them economically, so they can support the education of their children. Our approach is a holistic reintegration of the residents of the whole communities. So, if you talk to them about bringing back their sons who have become perpetrators of violence, at least they have been healed of their own traumas, and they can accept them back. It is a forgotten area; we have to change the narrative and then demystify this misperception that Western education is forbidden, so I turned to Islamic scholars and big Islamic organisations.

How did you engage Islamic scholars?

Boko Haram regards itself as an Islamic group, has developed an ideology, and it operates and recruits where there are Muslims, but they are ignorant of what their faith teaches. The greatest challenge to Islam is ignorant Muslims. Who is the best placed to address this? Muslim scholars, grounded in Islamic education. I reached out to them through umbrella organizations like the Women’s Muslim Organisation, and presented them with my idea. They were overwhelmingly happy, saying that this was the first time anybody had ever called them in to discuss a solution. So we went back to the central concept of Boko Haram’s discourse: that Western education is forbidden. I built on peace building concepts like education, women’s rights, human rights, living with non-Muslims, skills like negotiation, mediation and self-esteem. I asked them to do research into what the Qur’an and Hadith say about these ‘Western’ concepts. Ultimately we want to show society that what they consider ‘Western’ is not only compatible with, but integral to Islamic discourse. The Qur’an calls for everyone to be educated.  We put together a booklet which we named ‘The Manual of Peace Building’. We went on the radio, because everybody listens to the radio. The scholars would go for weekly live phone-in programs where they would speak for half an hour then open the lines and people would call and ask questions or give contributions.

What is the impact of the manual and call-in radio shows?

The local authority confirmed to us that after the first 12 weeks there was a 40 per cent increase in children’s enrolment in public schools, which was previously seen as forbidden. Facilities became overstretched, so they would sit on bare floors and under the trees. We had to advocate for more infrastructure to accommodate for the increasing numbers.

The radio programme was recommended by a blogger in the U.S. for adoption by the women of Afghanistan, while numerous requests have come up for translations.

What are the future plans for your peace work?

The manual is being used in Islamic schools to teach peace. It is an extracurricular activity and teachers select students to attend sessions on a weekly basis. Then after completing the course, the students recruit other kids and lead them through the manual. Before you know it, the community in the entire school are enriched with this message of peace, coexistence, and tolerance. The idea is to catch them at an early stage. Furthermore, the Islamic schools in my area have adopted this book and made it compulsory for children to study. It has now been translated into Arabic and two other local languages with support from ICAN, so the content can be used in women’s and other adult Islamic lessons as well.

I am now planning and seeking more support to scale up these interventions in more communities across the entirety of Northern Nigeria, and to also support interventions with victims of early marriage and early divorce, to facilitate institutional and societal changes in this area.

Safety is at jeopardy when combating terrorism. Have you faced any risks?