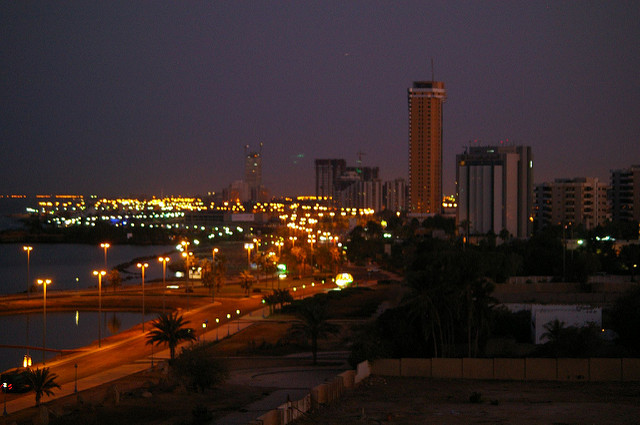 The two faces of Jeddah

This is an excerpt from Sahera Patel’s book Unveiling Arabia, available through Amazon.

Every evening I would make my way to the balcony half an hour before the sun was about to set and absorb the beauty of the moment.  One of the perks of living on the edge of the desert was a soothing breeze and clear views of the horizon.  The sun would descend behind the many minarets, creating spectacular hues of red, orange and yellow.  Wisps of cloud would filter the rays of the sun with angelic prowess, and just as the tip of the sun disappeared out of view the call of prayer would pronounce itself, proudly capturing the powerful moment of nature.

The soothing tones of the Arabic words call out for devout followers to declare the oneness of God and to come to prayer. They have an immense power.  The inspiring sound rarely fails to move the human heart whatever the beliefs of the listener.  Coupled with the natural, ever-changing view of the skies, this daily privilege was the perfect tonic after a hard day’s work.

On the corniche, twenty minutes’ drive from the compound, were the closest public beach and sea-view restaurants.  A further twenty minutes away were the less populated, more exclusive beaches with expensive restaurants and hotels that catered for the more affluent local Arabs and Western ex-pats.  International chains such as Starbucks, Movenpick and The Hilton made their mark along the coast and there was no shortage of eager customers.

One place in Jeddah that we visited frequently was the area known as Tahlia.  This is where one can find world renowned restaurant chains such as Cheesecake Factory and PF Changs.  The extensive, high society street is dotted with designer shops, glamorous women and beautiful, jaw-dropping cars.  We would spend much of our time people-watching after a delicious meal, sitting on the steps of a small but busy square as we waited for our economy Uber to take us home.

Ferraris, Lamborghinis, Maseratis and many more super-cars would cruise past us with music blaring out loud.  The Arab youth, strictly of the male variety, would be hanging out of the windows, determined to be seen.  Some of them looked barely sixteen but the lax driving laws allowed this blatant display of their inherited wealth. Their female counterparts would walk in and out of the restaurants and shops in small groups, dressed up to the nines, hair and make-up impeccably executed.  An open front abaya would be thrown casually over skinny jeans and glamorous heels, and those who chose to fully cover would do so in exclusive, designer abayas.  It was an obscene but entertaining display of wealth and beauty, and a far cry from the reality of most of the multi-ethnic population that took up residence in Jeddah.

Tahlia was a mere half hour drive away from the Kaaba yet the worldly display of materialistic and superficial spoils could not be further away from the serene spirituality of Mecca.  It was yet another expectation that I had to bury: the love of peace, modesty and humility lives in the inner self and can be found in all four corners of the world, just as ostentatious behaviour and the urgent desire to parade power and wealth can be found just a few miles from the most revered sanctuary of meditation in the world.