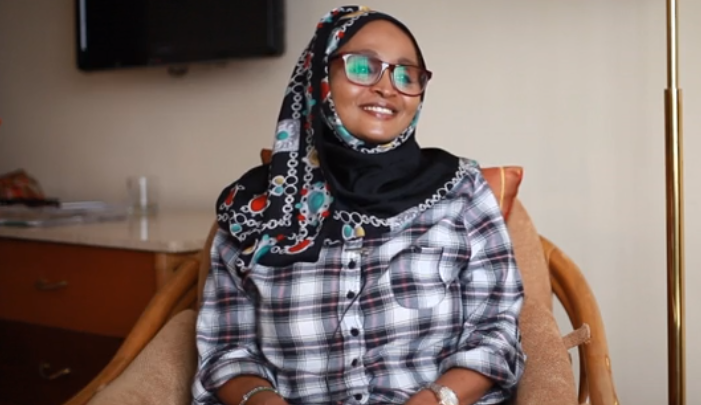 Photos of dark skinned men, sometimes even boys, in military uniform, holding big guns repeatedly appear in the media. It is a sad fact, but communities in Kenya have been radicalized. The situation in the African country barely makes the headlines, and efforts to combat such extremism never do, but local people are fighting back.

Rana Allam spoke to Sureya Roble, an active member of the Maendeleo Ya Wanawake Organisation and the Women’s Alliance for Security Leadership (WASL), on her efforts to counter the scourge of extremism and bring peace and social cohesion to Kenya.

What got you involved in this work?

I studied social work. I am trained in public administration and community development. I am lucky that I went to school because my community is still trying to understand the role of women in society. As someone who has had opportunities, I felt compelled to give back to a society in which women are not fully empowered and to stand up and defend their rights. Women are taking charge now – albeit slowly. They are running businesses, and they are the heads of households. So why shouldn’t they be in leadership positions, where decisions are made? This is an opportunity for me to advocate to my government, religious leaders, and community to lobby to have more women represented, especially those from marginalised communities. By mobilising women and girls, it becomes easier to advocate for your cause. Numbers give you power, voice – and also the space to articulate various issues.

How do you view extremism?

I come from Mombasa, which is a Muslim-majority city. For a long time as a community we have been debating the meaning of the word ‘extremism’. To me, it is having an extreme stance about a certain idea, and not accepting anything else. But some think that extremist positions and perspectives are acceptable, so long as there is no violence. But if there is no acceptance or even tolerance of another person, then using violence against them can become more permissible. So we have to be careful. We still need to co-exist with each other, irrespective of our religious ideologies or the perceptions that we have of each other.

What is the current status of women in leadership positions in Kenya?

Kenya adopted a new constitution in 2010 which introduced the two-third gender rule which stipulates that ‘not more than two-thirds of the members of elective public bodies shall be of the same gender’. My organisation works with women and girls. It is a national organisation with almost four million members, aiming to empower women politically, economically, and socially. We believe that we need women in leadership positions so that they can advocate on issues that really affect them and their families. Women have not been included in this field for a long time. Security has always been a male preserve. Kenya launched a national strategy on countering violent extremism and even though we lobbied to have the role of women included as a stand-alone pillar, this never happened. There is a notion that, because we are half the population, women are everywhere: in peace, in media and all other fields. In reality, we need to place women at decision-making tables. In Kenya, women have been victims for a long time. But we have also come to realise that women can be the perpetrators of violence, as well as peace activists. Due to a patriarchal society and culture, women have not been speaking out. And now their children are being recruited by terrorist groups, particularly Al Shabab in Somalia.

How do you push back?

We are holding dialogue forums with the women affected to make them understand that this is an international problem. It is not just a personal problem, nor a religious one, and they need to speak up about it. We urge them to come out and overcome their fears of being targeted or shunned by their communities. Unfortunately, this is complicated, since the government views all of those returning from Somalia as criminals, and security forces are never kind to them. As soon as someone is recruited or returns from Somalia, regarded as the centre of Al Shabab, the security forces see them as guilty before they are even charged, and target and harass their families. Our organisation built their confidence, empowering them with information, protecting them and letting them know that we support them and understand their struggle. We also formed support groups where women talk to each other. Most of those who are recruited are sons or husbands: family breadwinners.

Lately, girls have also been targeted, and a number of them have been trafficked without their consent either through being promised lucrative jobs in the Middle East, with promises of scholarships, or even marriage with radicalised would-be husbands. Last year, the government gave amnesty to radicalised youth who surrendered themselves to the authorities, but the outcome was disastrous. The few who obtained this disappeared without trace and families blamed the government.

The second thing we do is try to create dialogue between the security forces and women. The police are not loved by the masses. There is a perception that they are brutal, especially towards women. We have seen many cases where women have been abused or raped by police officers. We wanted the government to know that there are women who are suffering in silence. We organised roundtable meetings so that we could create trust, and ways of sharing information that guarantees it will be secure, and that women will not be victimised.

What is at the heart of extremism in Kenya?

One thing we came to realise is that most of the youth who become recruited into extremist organisations come from unstable homes. Their father figures are missing from their lives. Mothers are supporting children alone, and becoming overwhelmed by their teenage sons. High poverty levels within the Mombasa coastal communities are a contributing factor. The marginalisation of the region leaves the community vulnerable to terrorist groups. Since independence, there’s been a failure to develop the social and economic factors that would foster development in the area.

Initially communities were pointing fingers and blaming each other for the increase of terror attacks. This raised the need to have platforms where Christians and Muslims could come together at the same table and condemn attacks together. It is not just a Muslim problem; it is a problem that both sides need to tackle.

Another major problem is that historically, our girls did not go to school for cultural reasons. Now that some are entering universities, they have become soft targets for extremist recruiters. Most of the girls recruited by ISIS and Al Shabab are girls who are in school or college. It is no longer just about poverty, but about supporting the ideology of jihad. Recruiters have changed their tactics. They are recruiting youth who have various skills. Young people who are active on social media are a target.

We realised through talking to the boys and girls that they do not have anybody to talk to, and that there is often a missing link in the family. There are no role models that they can admire and emulate. What we do is hold forums with the most vulnerable university students. We engage with them, and we conduct training on countering extremist religious narratives. We launched a mentorship program which links every Muslim with a Christian, and they talk to each other and share information on their religion.

How are you empowering women politically?

We engage with the government to make sure women are at the table during security negotiations. For a long time, we were put to the side. Kenya adopted the United Nations’ resolution 1325 which created a space for women’s engagement in peace talks. We have a plan of action, so we try to realise that. We are lobbying to make sure that the government implements the policies they have put in place. Women empathise, and have a mother’s instinct to negotiate, especially when they talk to the youth. This makes them effective in peace negotiation processes.

How can the world supporting women making peace?

The world needs to realise that women are very important in peace initiatives. They are stakeholders. They have families; these are their children we are talking about. They are leaders in their own rights.

Whatever decisions and policies are being put forward, women must be at the forefront. As a woman leader in my town, I cannot live in isolation. I want to be part of what is happening out there. And we need to speak from all corners of the world, in one voice.

This interview was published on ICAN and has been reproduced with permission.