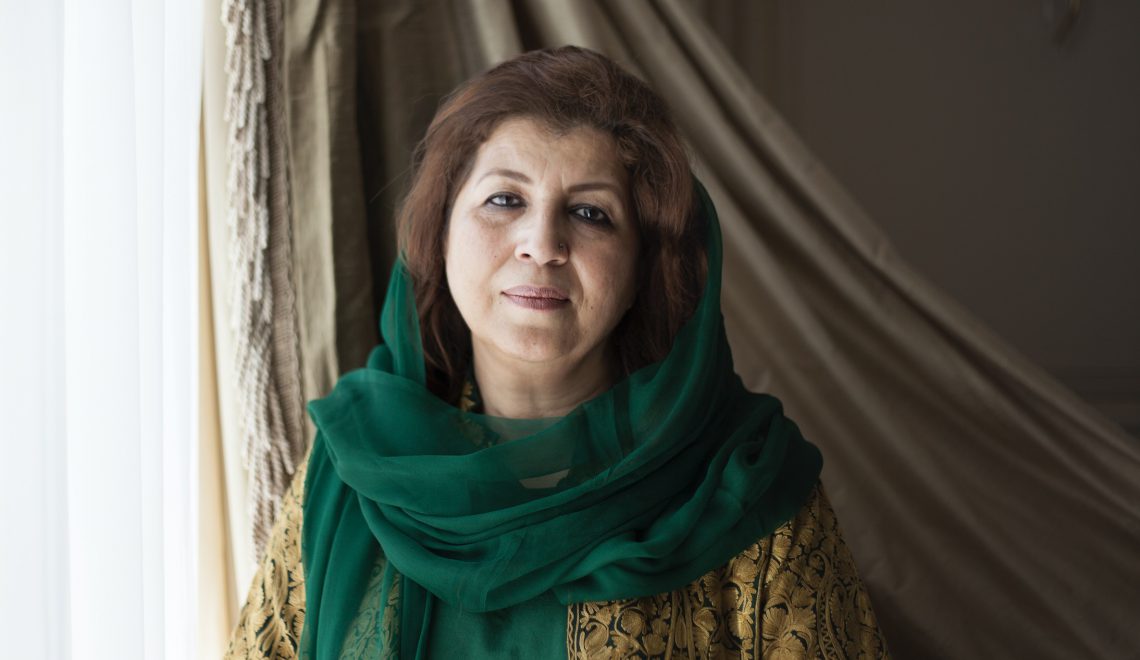 In the Spring of 2017, in a small village close to a progressive district which houses one of Pakistan’s biggest universities, an area which is known for its poetry, beauty and progressive ideas, the voices of violent extremism still find resonance. ‘It was a shock for us to know that this particular area could be home to violent extremism’, says Mossarat Qadeem, PAIMAN’s director.

It all started when a group of PAIMAN’s Tolana Mothers (community peace groups trained by PAIMAN; Tolana means ‘together’ in Pashto language) were doing community work, raising awareness about violent extremism, its indicators and impact, and were discreetly told to meet a certain woman. No further information was given. They went to the woman’s house and found out she was stitching something that looked quite strange: a waistcoat with many pockets. After pressing the matter, she told them that she got orders to stitch such jackets from another woman. The Tolana Mothers told her that these pockets were used to put explosives in: that these were suicide bomber jackets, and that her work was basically helping to kill people. The woman said, ‘I don’t mind, as I am being paid for it and have nothing to do with what they are used for.’ The peace group was unable to dissuade her, but they got some information regarding who placed the orders and who collected the jackets. They also found out that there were 30 other women in the village doing the same work.

The Tolana Mothers went on to meet the woman who supplies the jackets to the extremist group, and asked her whether she knows what they are used for. She said, ‘Of course I know. We are all engaged in a jihad. I haven’t told the other women who sew the jackets, but they must know. What other use can these strange jackets be for? I know who I am supplying. I know what they are being used for and I am playing my part in the jihad that is being carried out against the infidels.’

Mossarat, who had met women in the same line of business before and had managed to work with them until they became members of the Tolana peace groups, decided to meet with one of the women who stitched the jackets. ‘I invited her and we had a discussion, I asked her how much she was being paid for one jacket? She said 100 rupees (less than one dollar), so if she stitches five per week, she gets around five dollars. Sometimes she would get a little more, and she said that that was enough for her to buy groceries or clothes. So I said, “Well you are only earning 1500 rupees per month, let’s start working on your stitching skills and use them in a positive way. You can still earn money but you won’t live with the regret of using your skill to kill people. You can instead use it to help and support other women by stitching their dresses and you will earn even more money.” And then we came to the discussion of jihad.’

Mossarat explained that in the context of Pakistan, the religious texts, specifically those about jihad, are being used selectively and taken out of context. The extremists exploit the fact that Arabic is not their language. Thus they are left at the mercy of those interpreting the Quran. ‘Even though, we have developed a counter-narrative, based on our knowledge of Islam and the prophet’s life, it is very hard to change the common thinking being preached by those people view as religious scholars or mullahs. People have internalized these teachings of extremism over a long period of time’, Mossarat says. There is an additional hurdle as the interpretation of religion is perceived to be in the domain of men. ‘It all gets very complicated. Women do not have an authority on religion, so we use other methods to convince them. Most of all, we use the socio-cultural aspect of Do No Harm, which is inherent in the code of Pashtunwali (the traditional set of ethics governing the Pashtun)’ she says.

During this encounter, the Tolana Mothers and Mossarat Qadeem managed to convince 13 of the 30 women involved in the stitching of suicide bomber jackets to stop. They have provided the women with alternative sources of livelihood, and explained to them that heaven can be achieved in many other ways, without the need to be part of a group that kills people. The work is ongoing with the other women.

It was the PAIMAN-trained Tolana peace keepers of the community that found these tailors. Mossarat says, ‘They are our eyes and ears in the community. Without them it would be very difficult to engage more women in our peace programs. The impact of engaging women in these areas is huge, she says. ‘The average family is nine to ten people and when women are educated in peace and have some form of economic empowerment, their entire family is transformed.’ The work is also cost-effective. For just $2000 a month, PAIMAN can engage, educate and provide livelihood skills for over 60 women, who will in turn take something home to their families and communities.

‘What we do is prevention,’ says Mossarat. ‘Violent extremism has become a way of thinking, a normal way of life. Creating awareness, sensitizing these communities, and engaging these women so that they themselves spread the message and take ownership are essential for preventing violent extremism.  It is these women, empowered with knowledge and skills that can influence the thinking of their family and community.’