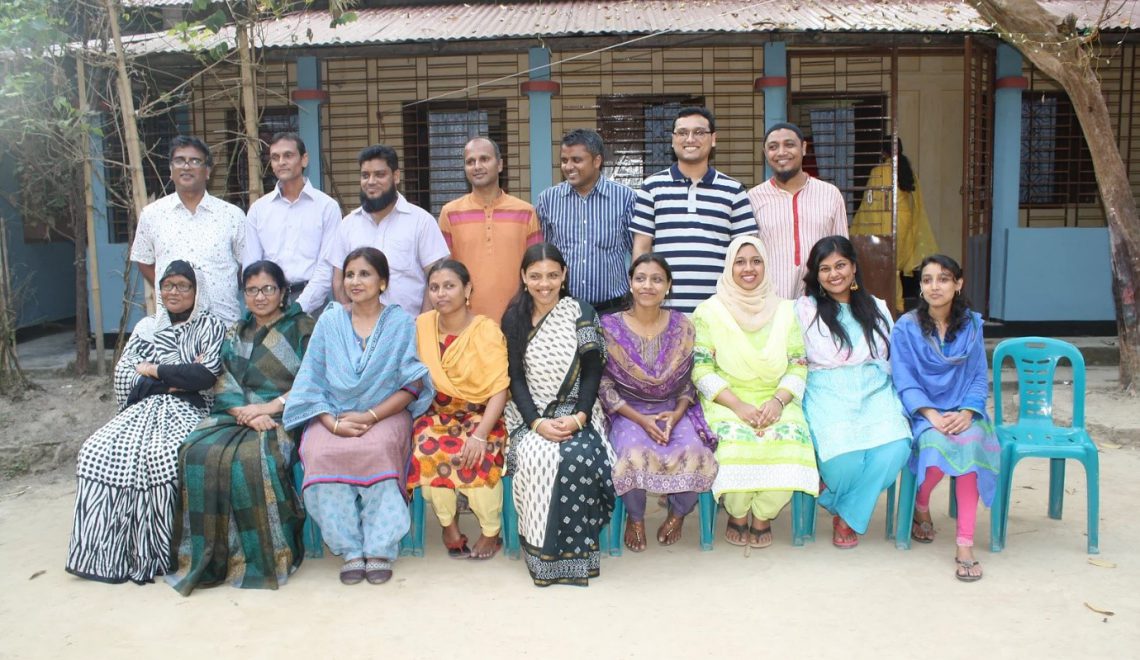 (Most of) my cousins on my father's side.
Experiences

Where is your home?

On meeting for the first time, one of the first questions a Bangladeshi will ask is ‘Bari kothai?’ 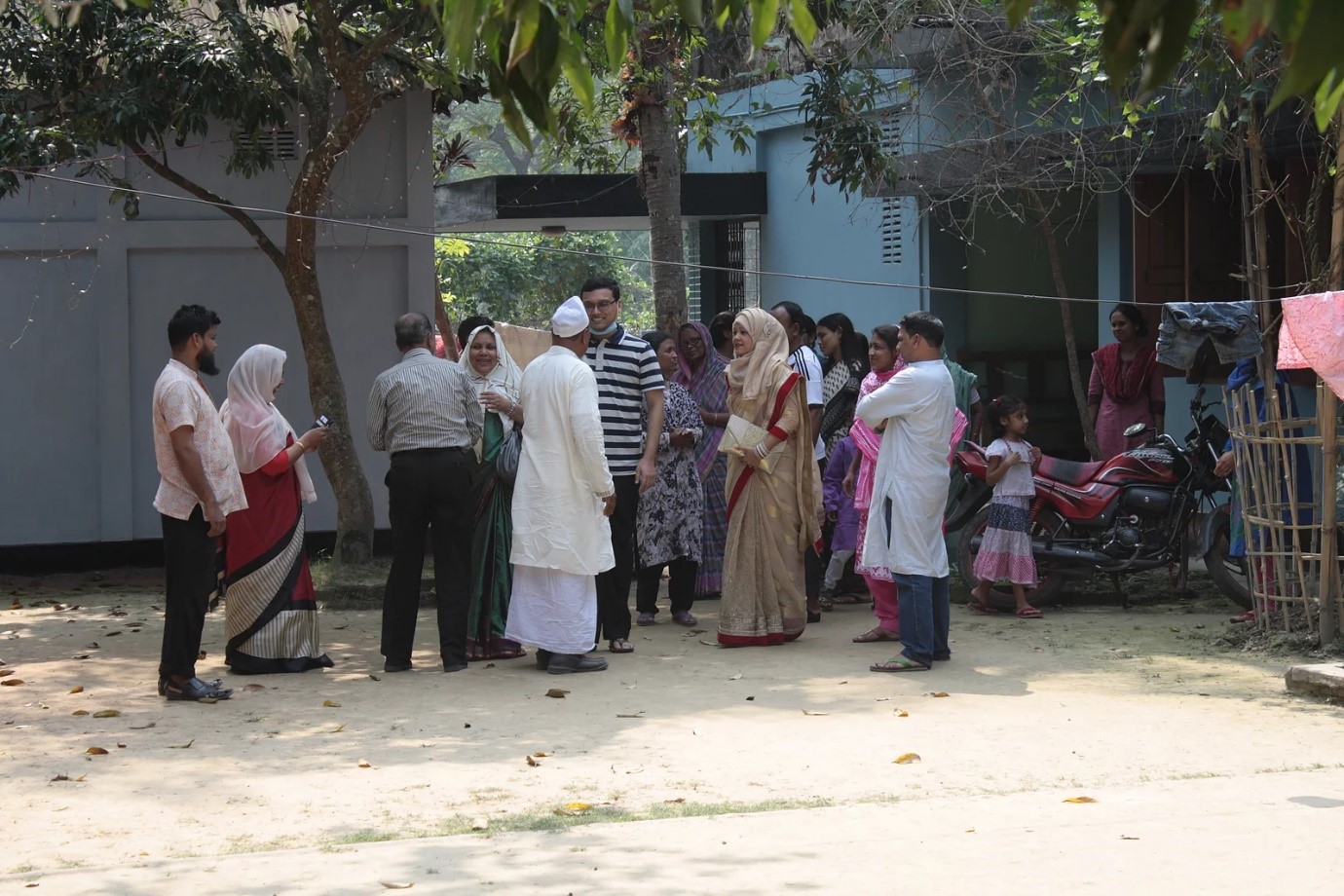 Family coming home to the bari from England, the US, and other places, after spending many years away.

The enquiry ‘where is your home?’ asks so much more than for a postal address. The answer can potentially contain information about the person’s educational attainment, economic status, religiosity, political persuasion, profession…and even more intimate details, such as probable levels of marital fidelity and trustworthiness. It’s perfectly usual to hear remarks that classify an entire village or region as being of a particular type; people from that region are rich but stupid: the women from that sub-district are flirts: the men from that village are crazy and make terrible husbands.

It is a shortcut to making a judgment on a person’s character and background. In identifying a person’s ‘bari’ – or family home – the person in question is contextualized within a local history that usually spans several generations. He or she now has historic assumptions about families from that particular area bestowed upon him or her, both good and bad.

My father always took great pains to teach my sisters and me how to respond to the question ‘bari kothai?’ For, as with all questions, there is a correct answer and an established order in which to gradually reveal information, according to how much a person wants to let on about themselves:

Firstly, our region is Sylhet: This one is usually fairly easy to guess based on dialect, and reveals relatively little other than assumed wealth. Sylhetis have always been the most prolific emigrants, particularly to the United Kingdom. The region reflects the wealth that has been sent back over generations from diaspora communities.

Secondly, our district is Moulvibazar: This indicates little more than geographical specifics. In our case, this reveals that our family home is located within the area of Bangladesh with around 90 tea gardens. As a result, it is one of the most beautiful. 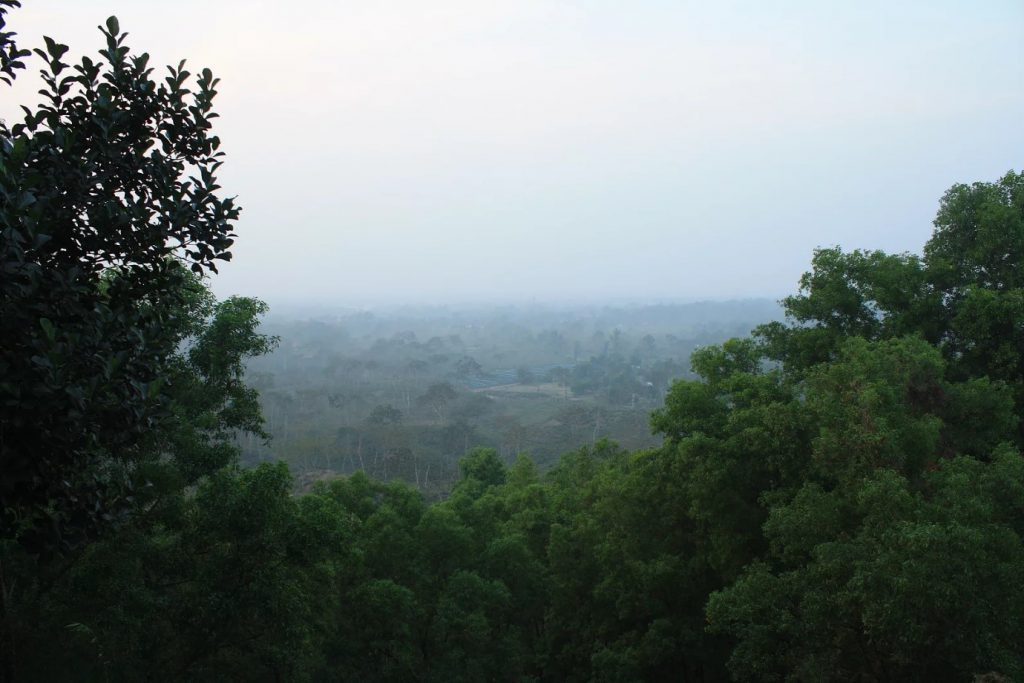 View from the bungalow atop Gazipur Tea Estate in Kulaura, one of the 92 tea estates in Moulvibazar.

A worker in the Gazipur Tea Estate in Kulaura. 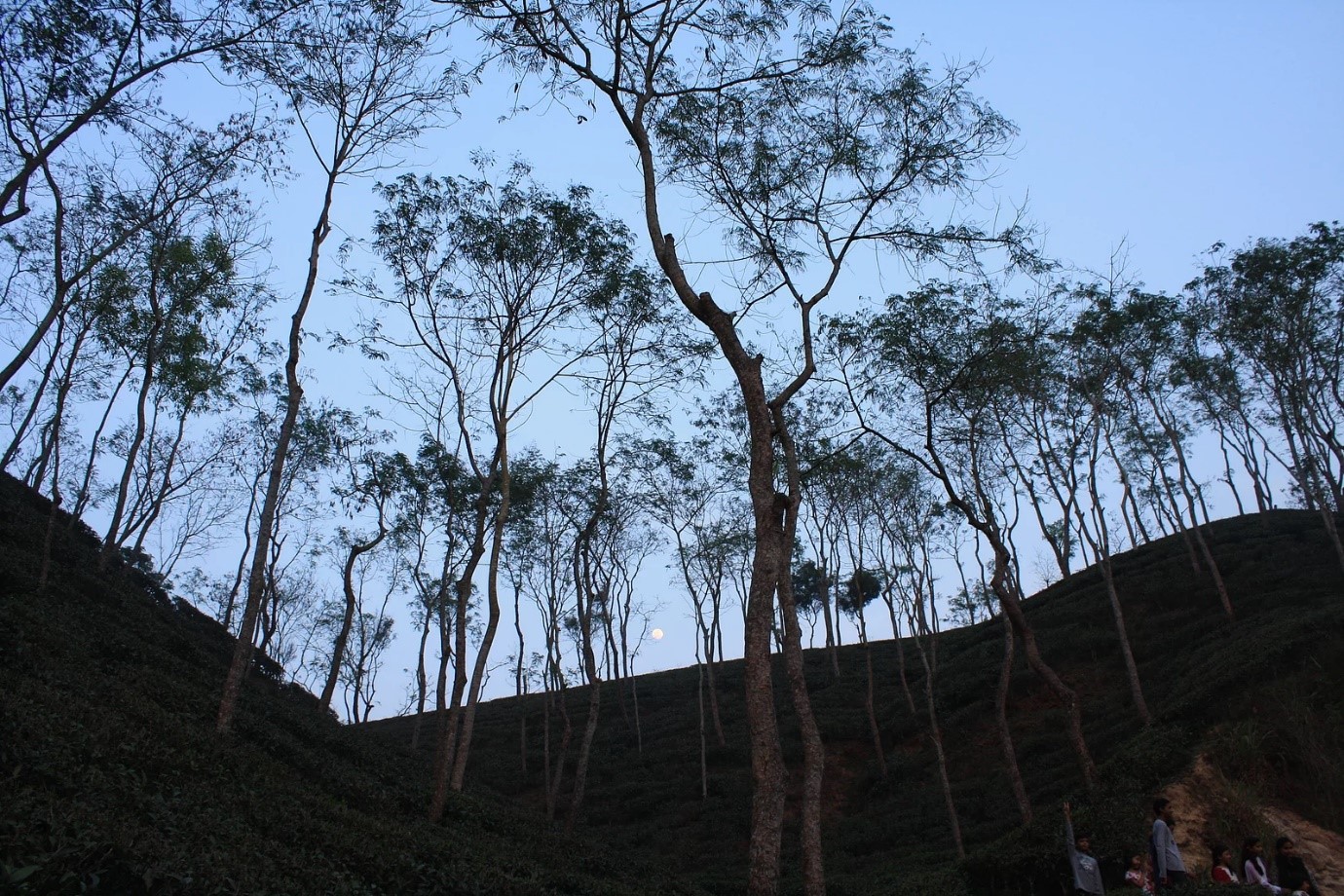 Dusk and the ascending moon in the foothills of Gazipur Tea Estate.

Thirdly, our sub-district or uppazila is Kulaura: Identifying the sub-district allows the questioner to hone in a little more into matters such as education – what colleges or schools are in that area? It’s also close enough to make enquiries about character references for marriage proposals: arguably the most important reason for knowing someone’s bari…

Fourth, and finally, our village is Monsur: few questioners get to this point, as it is unusual for anyone to know the names of individual villages unless they are locals. As a result, this is the sweetest and most intimate detail. 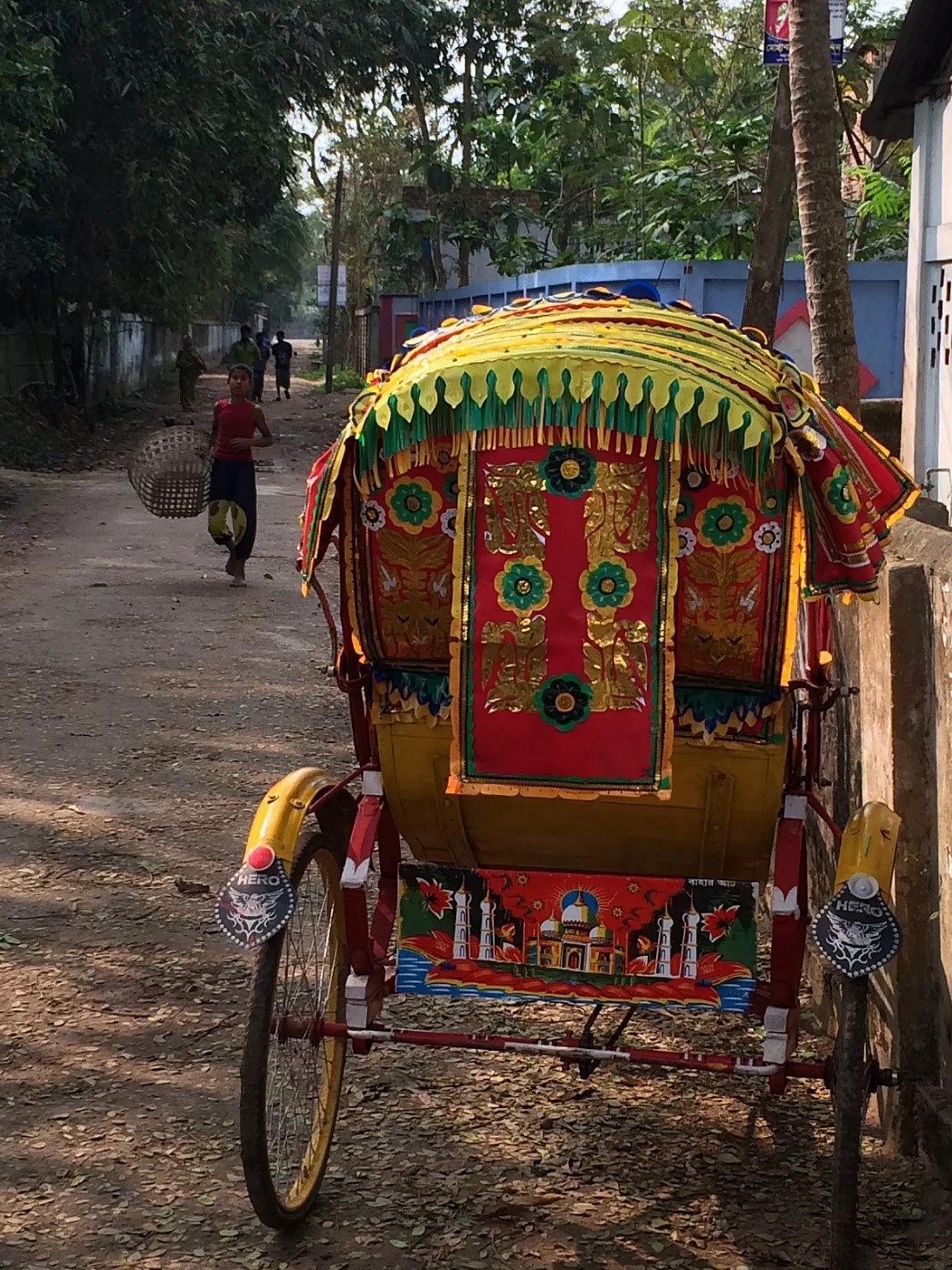 The rickshaw we rode in for our village tour.

My recent visit to Bangladesh was all too short, but on the last day, the morning that we were due to drive to Dhaka for our flight, my father took me on a rickshaw ride through the village of Monsur.

As we sat side by side in the jolting, lurching rickshaw, he pointed out sights that I had spent my childhood hearing about but had never seen. The fields that used to be large ponds where he used to sail, pretending to be Vasco da Gama, the school he attended, and a gurustan (cemetery) where some of our relatives were buried.

The gurustan in Monsur that lies towards the eastern part of the village.

We had already been to a different cemetery where my grandparents, aunt and uncle are buried. It was neatly kept, gated, with a series of modestly unmarked graves: only one was ‘marked out’ in any way, with a simple fence of bamboo around it. My mother and I speculated that this plot probably belonged to an ex-pat, perhaps from England, whose family had imbibed the Western traditions of headstones and other markings of final resting places, and had brought some of that back with them to this cemetery. On the morning tour I took with Abbu, we passed an even more untamed cemetery that I found so striking that I had to photograph it (after an internal conflict as to whether it was appropriate).

This cemetery was unmarked; it could have been mistaken for any general plot of land. Vegetation grew over it naturally, and there was something intensely beautiful about the anonymity that the deceased were awarded. The idea of a marked grave existing for eternity has always been a difficult concept for me: there is something entitled about monopolising a patch of earth until the end of time. But the idea that nature would soon embrace the dead, and that the dead would become part of the plants and trees that spread over the earth was much more peaceful, and for the first time in my life, I felt that this was how it should be done. 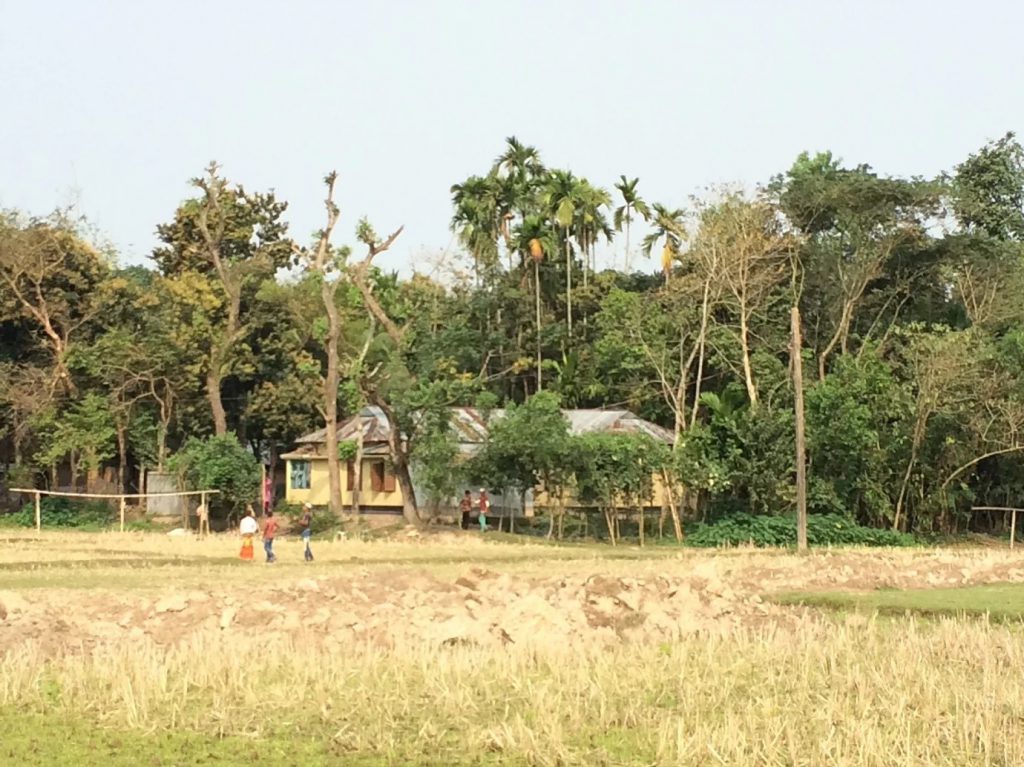 A local bari from the village road. 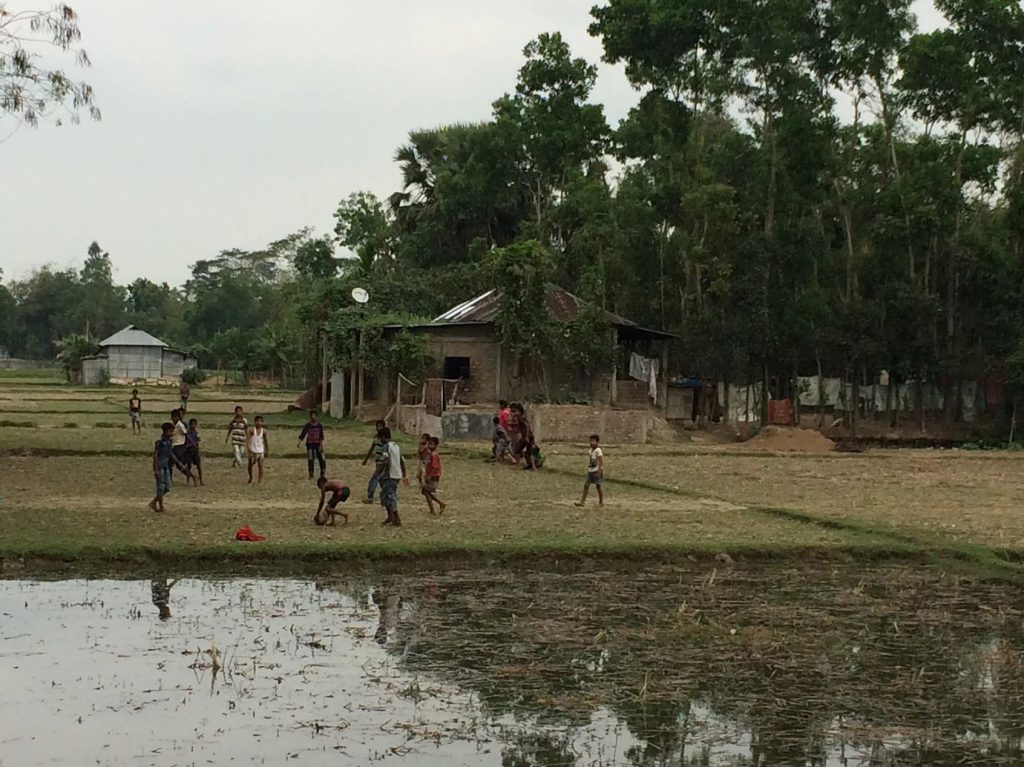 I asked Abbu if Monsur had changed much since he had lived there.

‘Of course,’ he replied, ‘the streams that ran with water are filled with earth now. The pukurs (ponds) that had fish are fields now.’

It is the same story with so many villages in Bangladesh – the scramble for commercial and residential land to build on has gutted the natural environment. Monsur is still beautiful, but there is a fading ghostliness around it. As we were travelling through the village, we saw a field being filled in with cement: the preparations for house building. Cement does not allow for drainage and as such, the water system stagnates even further, and more natural streams and rivers – the life veins of the village – slowly dry up. 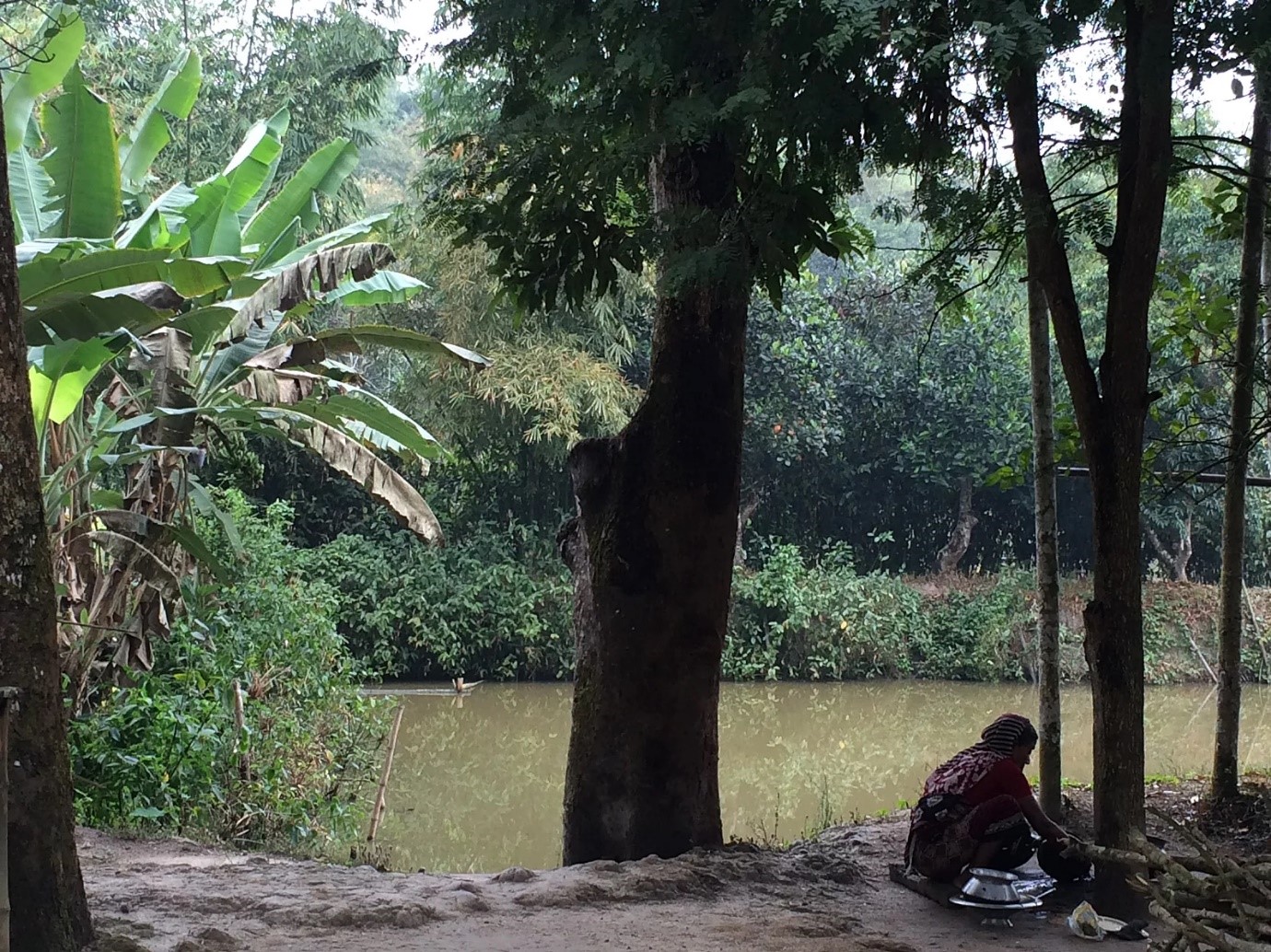 An added layer of complexity – and beauty – of the concept of ‘home’ in Bangadesh is that while most people are identified by their father’s bari (Bap-er bari) it is also usual to lay claim to one’s maternal family bari – known as ‘Nana-r Bari’ (grandfather’s home) or ‘Mama-r Bari’ (maternal uncle’s home). There is a particular kind of romanticism in Bengali culture associated with visiting ones maternal bari that has been immortalised in the poem ‘Mama-r Bari’ by Jasim Uddin. In the poem the children sing happily about donning flower wreaths and visiting their uncle’s house where they can feast on ripe fruits, fresh from the trees, the juices staining their mouths. It is an idyllic place synonymous with indulgence, where no child is disciplined, and relatives await their young returnees with open arms and an abundance of treats.

As almost all of my mother’s family resides in England, after my Nanu and Nana moved there in the late 1950s and early 1960s, my ‘Mama-r bari’ is technically in Manchester, England – and it certainly upheld all the ideals of being spoilt and allowed to run riot. As such, Banugach is actually my double-maternal home, being my mother’s mother’s family home rather than my mother’s father’s home (which is a place called Shathgaon). More remote than Monsur, it remains unspoilt and relatively unaffected by any major building work. Banugach sits within the upazila (sub-district) of Kamalganj (whereas Monsur sits within Kulaura). In real terms, they are about an hour and a half to two hours away from each other, although the difference in terms of scenery and atmosphere was very different. In Banugach there was extensive irrigation meaning that the paddy fields were already lush and sprouting, whereas Monsur did not have any dhan (rice) growing at the time. I witnessed the meticulousness that the farmers employed when re-planting the rice seedlings. The uniformity of the fields was a thing of wonder. 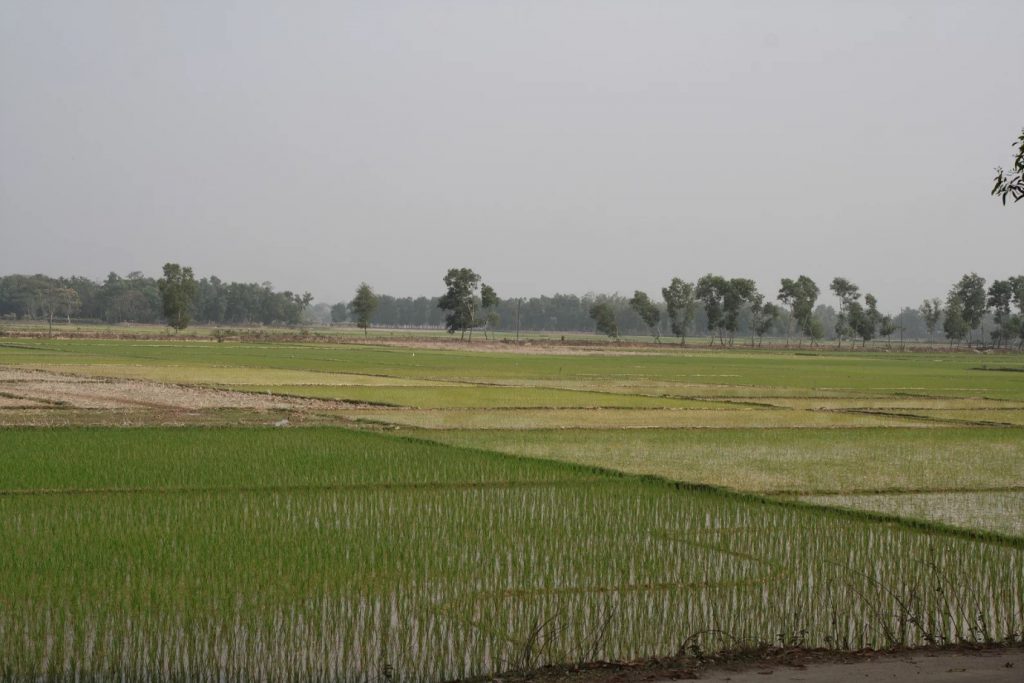 Rice growing in the paddyfields of my Nanu’s bari in Banugach.

A suspicious looking cow with her calf.

The bari in Banugach is still relatively agricultural, with cows, goats, and many different types of chickens and ducks. The chickens were breeds I had never even seen before, and all have brilliant names that describe their appearance: gola sulail which literally translates to ‘shaved neck’ is a kind of breed that, predictably, has no feathers around the neck. Another type with feathers that looked like they were permanently blown back, which was named ulta foir (backwards feathers). The orchard had mango, papaya, coconut, betel nut and jam (a kind of dark large berry) trees, and, much to my delight, a series of begun (aubergine) plants. 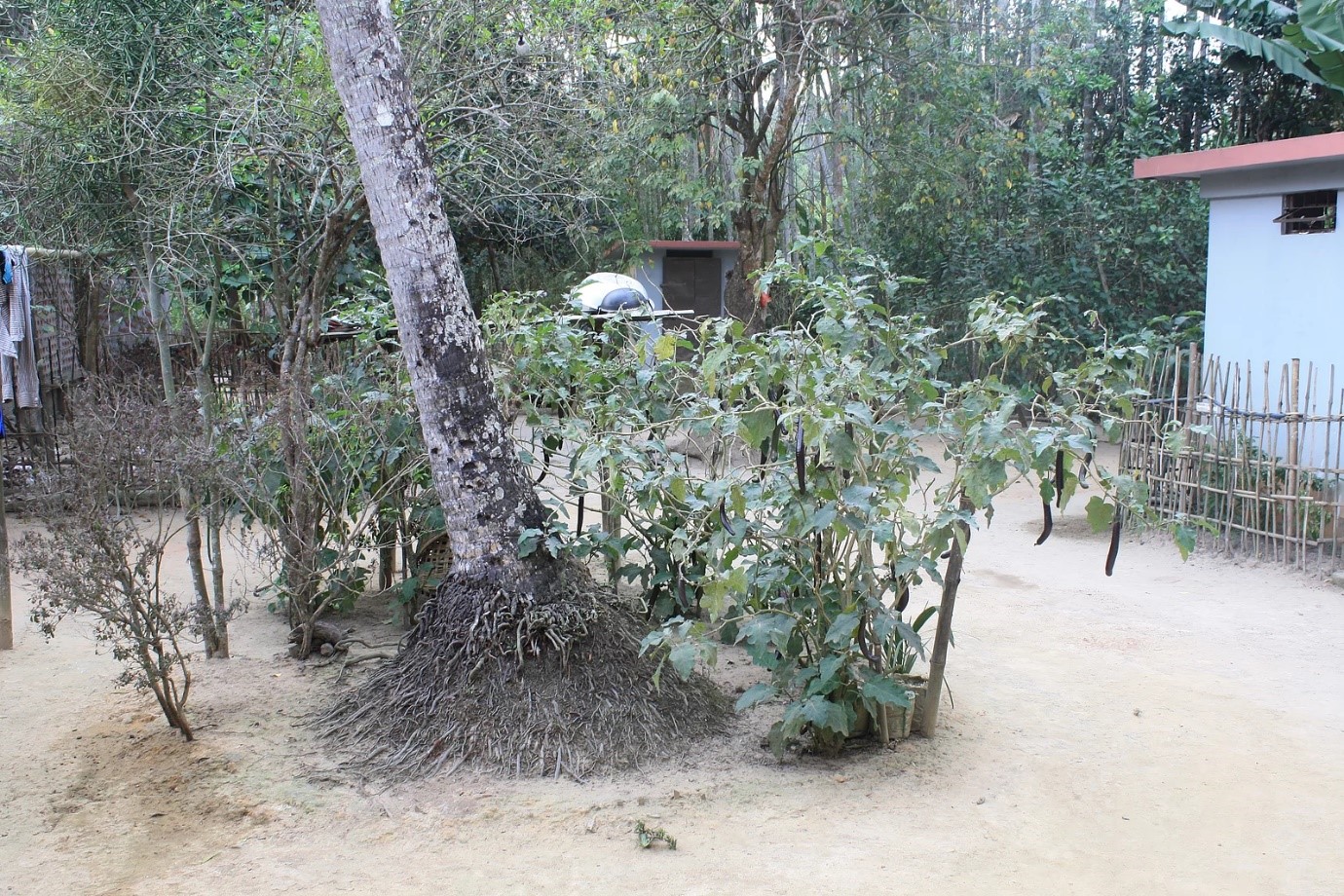 The meaning of coming ‘home’

The notion of ‘coming home’ is one I could write about forever – and probably will. I have come across people from the Bengali diaspora who return from their visits from ‘the Desh’ only to extol the virtues of the ‘simple life’ in the village. They mourn the loss of a supposed golden agrarian utopia that they were never even part of – in their imaginations the ‘village’ encompasses curvy village girls fetching water in urns and giggling behind colourful sari veils, hearing calls to prayer on the masjid loudspeaker, rolling around in fields feeling at one with the earth, climbing trees and eating the fruit with their bare hands. They see any technological advancement as a betrayal of this myth. They bemoan the prevalence of mobile phones in Bangladesh, saying how it is ‘ruining’ the country.

It is hard not to see these views as being orientalist. It idealises a past that arguably never existed – or if it did, it was certainly not without its own set of serious difficulties, such as lack of access to medical care, a high prevalence of diseases, infant and maternal mortality, and so on. The truth is that, as with anywhere, the ‘village’ in Bangladesh is changing. Mobile internet is portable, reliable, and the data is so affordable that it would make most Europeans wild with envy. You can now kill mosquitoes by electrocuting them with charged tennis racquets. Rural communities in Bangladesh are living, changing entities, as they should be, and the expats’ efforts to romanticise them minimise that.

For me, though, the notion of coming ‘home’ was most keenly felt when I realised that in both of these villages – and beyond, in other cities and towns in Bangladesh – I had family members who not only knew who I was, but who also maintained an interest in me. Who talked about me, prayed for me daily, and counted me among their family members even though we had never met. And yes, thanks to technology and Facebook, they followed my life even though I was not there, keeping up with my travels, birthdays, photographs and writing. 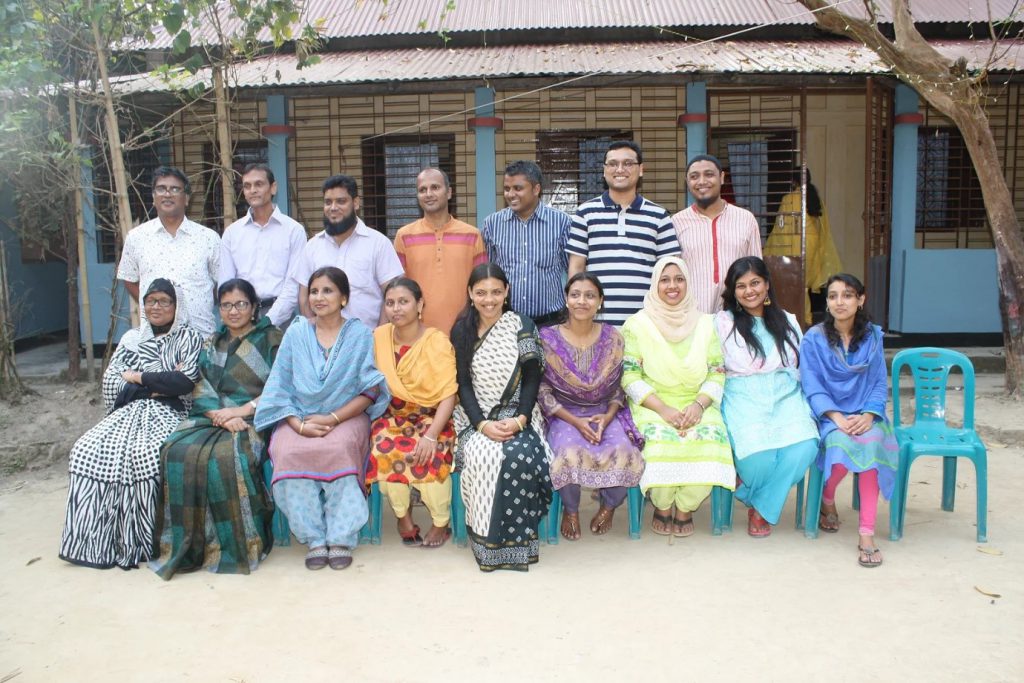 (Most of) my cousins on my father’s side.

My nieces and nephews. Photo by someone using Rifat’s phone.

It is a moving realisation to recognise that I may have multiple homes, with shades of belonging and unbelonging, dependent on context, time, and many other things. But to know that I can return and always be met with open arms is a blessing I did not expect, but that I now hold close.

Shahnaz Ahsan is an award winning writer of short stories and is currently working on her debut novel due for publication in 2019. Exploring immigration and identity, the novel is set in Britain and East Pakistan (Bangladesh) during the 1960s and 1970s.