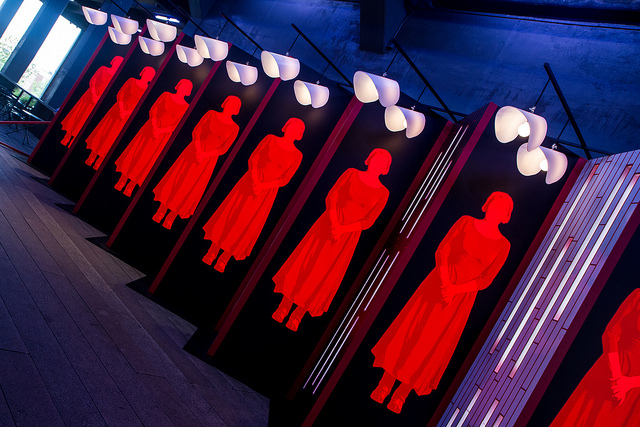 Watching the Handmaid’s Tale in Turkey

Margaret Atwood is one of my favourite authors: not only because of her engaging, magnetic fiction, but also because of her politics and her efforts to spread human rights. When I first read her renowned dystopian novel The Handmaid’s Tale some years ago, my initial reaction was simultaneous enchantment and abhorrence. Before the time of Trump, the book illustrated a worst-case scenario of religious fanaticism and misogyny, back at a time when the illusion of democracy and gender equality was still alive. Now, more and more privileged Westerners have to face up to a situation where what they considered to be fiction is indeed a reality for many people, both inside and outside of the West.

It is no coincidence that The Handmaid’s Tale has made a comeback as a best-seller right after the US elections – not only in Northern America, but also in Europe, where it has been republished after 30 years. In Turkey, the book has taken its place in the best-selling sections of book stores, especially in those which distribute views in opposition to the government. Seeing it on the shelves or coming across the TV show in our day-to-day lives in Turkey has not been easy, especially for feminist activists, who have to endure experiences parallel to the women in Atwood’s story.

Atwood herself acknowledges that most of the things happening in the book have already happened somewhere: ‘You could say it’s a response to “it can’t happen here.” When they say “it can’t happen here,” what they usually mean is, Iran can’t happen here, Czechoslovakia can’t happen here. And they’re right, because this isn’t there. But what could happen here?’ The show contains even more references to current examples of misogyny in the world. Alexis Bledel’s character steals a car and locks herself in it, despite the fact that driving is forbidden for women in Gilead. She drives in circles because there is nowhere to go. She keeps driving and even crashes into one of the soldiers trying to stop her. It is a clear reference to Saudi Arabia, where women were not allowed to drive until very recently.

Last year, the deputy Prime Minister of Turkey Bekir Bozdağ said: ‘We are not arresting anyone for wearing shorts’ implying that they are allowing women to wear whatever they want. Turkey’s increasingly anti-woman culture has not been reflected in the legal area as strongly as the government had hoped for, thanks to feminist campaigning. Yet the discourse of politicians and the constant demeaning of women by the government has created its own civilian army against women’s rights.

Every week now, we hear that a woman has been beaten or assaulted by a man for ‘showing her cleavage’ or ‘wearing shorts’ – or simply for existing, when the man intent upon harassing her runs short of excuses. Every time I write an article there are more recent events to be recounted. I cannot keep up with every item of news on gender-based violence, even if I spend many hours on the subject. Every time a politician presents their unsolicited opinion on our bodies we organize social media protests; every time a woman gets attacked for her lifestyle, we gather in that particular spot and protest – but we can never keep up. This does not mean that these attacks have only started recently: misogynist assaults have always been happening. What is different nowadays is that women are preparing themselves both as individuals and as activists because they expect the situation to get worse. Last year, when the government tried to pass legislation to free child abusers, strong activism and women’s marches everywhere stopped it from happening. Now they are trying to legally enable imams to act as marriage officiants, creating a transition from civil marriage to religious marriage. It is not hard to foresee a situation where this could soon become the only way to be married, and religious rules would start to apply – such as allowing the marrying of young girls, or allowing men to marry more than one woman.

Recently, the department of religious affairs released a statement claiming that girls of nine years of age, and boys of twelve years of age, are ready to be married if they show ‘signs of puberty’. After a huge public backlash, they have removed the statement from their website. On most days it feels like we are in an intense staring contest. We are not allowed to blink, even for a moment, or we will lose our basic human rights.

In this dark, always tense atmosphere, it has become impossible for me to watch The Handmaid’s Tale without being triggered or going into an anxiety attack. Instead of being a cathartic piece of television, the show has turned into a mirror of our experiences and a portent of what awaits us in the near future. Although it is known that Atwood’s book takes its stories from real occurrences in other geographies, we barely hear the voice of those ‘others’ whose reality is shown. It is not only so-called primitive, third-world or Islamic’ countries that undergo this kind of politics.

On the contrary, there are too many stories that are still not widely talked about. Canada legalized self-identification on citizenship documents for trans people in 2015; previously, trans people had to have completed sexual reassignment surgery. In Germany, Doctor Kristina Hänel is being prosecuted because she informs people about abortion on her website. Legal systems everywhere still work against the bodily autonomies of women and LGBTQ+ people. It is not an imagined dystopia: it is our reality, for women and for queers. It is the reality of many Islamic countries, yet it is not limited to them. It is the reality of many overlooked groups such as trans or black women throughout the world.

I already know the reality of The Handmaid’s Tale from personal experience.  And the more people learn about their government’s policies, the more they will know that reality as well.

Burçin Tetik is a writer and feminist activist from Istanbul. She holds a master's degree in literature from Freie University Berlin. Her work has been published in several newspapers and magazines in Turkey. She is the first woman to win the Turkish TBD Science Fiction Short Story Award.