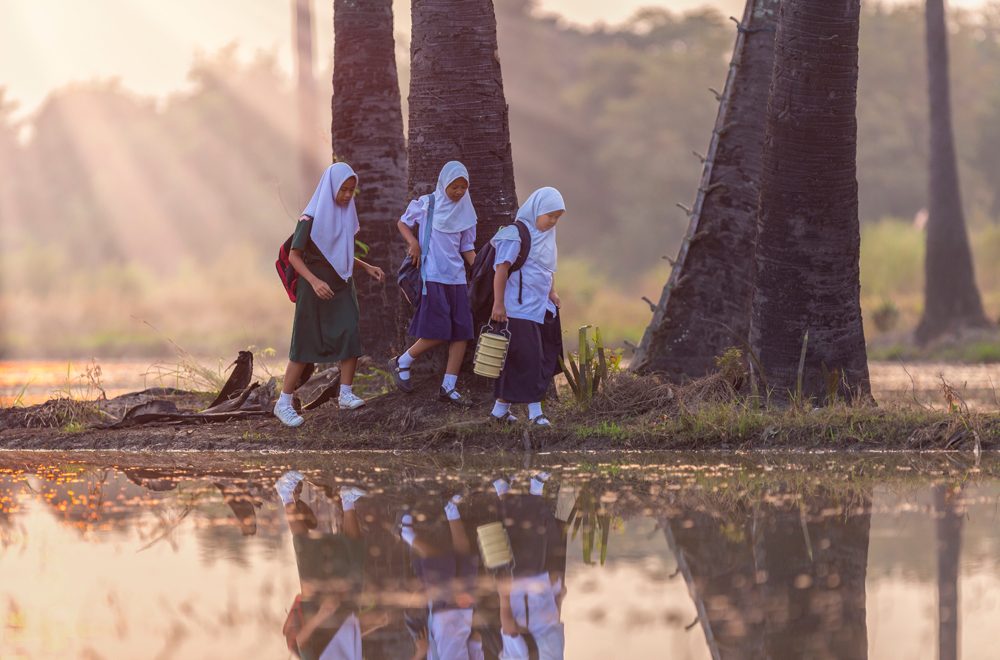 Indonesia is becoming more conservative. Being religious is seen as the ultimate way to be good; the end-goal is to attain heaven. A woman’s faith and actions are judged by the way she covers herself, or how many times she is seen praying.

I see this particularly in the enforcement of religiosity in public schools. In Indonesia, the majority of registered citizens are Muslim. Our faith is stated in our family certificates and identity cards. Mandatory religious practices have crept into public schools. In 2003, I attended a local public junior high school. We started the day off by reading the Qur’an. Muslim students are obliged to bring the Qur’an to school. If one of us didn’t bring a copy, the Muslim religious studies teacher would give us demerits and minor punishments.

It was frustrating for me. I felt this was a form of coercion. Back then, I did not know how to resist or question the fact that a public school which was partially funded by the government would allow this pressure to reinforce religious practices.

Schools differ in implementing religious adherence. My junior high school instructed female Muslim students to wear the headscarf every Friday. But when I was in senior high, it was not mandatory to wear a headscarf at all. Yet both schools which had formerly allowed their female students to wear short skirts changed the uniform to long skirts. Their excuse was that it was necessary to prevent male teachers and students from peeping at girls’ underwear.

An article published by Magdalene.co explored how pervasive sexual harassment is in the education environment: boys play a ‘game’ of guessing the colour of girls’ underwear. Sexual harassment has become normalized amongst teenagers.

Over recent years, religious zeal has crept into school rules. As reported on Vice Indonesia, a public primary school in Wonosari, an administrative district in Yogyakarta, was found instructing students to wear the headscarf as part of their uniform – without mentioning the exception for non-Muslims. This was then reported to the education district office. The instruction was rescinded.

This is not the only case of headscarves being made mandatory in public schools. Dozens of schools have been reported to have forced girls to wear the headscarf as a part of the school uniform. An episode from Magdalene’s Mind, produced by Magdalene.co, explained that although the trend towards wearing headscarves is described in terms of girls being advised and encouraged, it is in fact being implemented through intimidation. Female students brave enough to protest have been stigmatized as being dissidents when they refuse to accept the uniform advised by the school.

Female students also face discrimination from the school administration after they reported this incident to local news. They were threatened with expulsion. This threat was reinforced by some parents of Muslim students, who petitioned the school to expel the protestors. They described the girls as a negative influence on other Muslim students.

Discriminatory attitudes policing women’s bodies do not only come from public education institutions, but also from the local administrative laws being implemented in certain parts of Indonesia. For example, in Aceh, women have been sanctioned by the shari’a police for sitting with their legs apart whilst riding a motorcycle.

In Depok, a local vigilante group calling themselves Indonesia Tanpa Pacaran(Indonesia Without Dating), patrol the city hunting for unmarried men and women socialising together. They pressure them to marry, providing a cleric to marry them on the spot. In Palembang, the mayor also created a mandatory rule that government civil servants must perform the morning prayer together and that their attendance would be recorded. These are just a few cases that have emerged in the media which indicate the growing power of the conservative movement.

Schools, local authorities, and vigilante groups pressurise women and girls to behave according to conservative interpretations of religion; but often, families do too. More often than not, relatives such as aunts and uncles are most likely to police their nieces into wearing the headscarf.

The control over what a girl wears, how she sits, and who her friends are, starts at a very young age. Women’s bodies are under control. Although Indonesia is a secular country, a woman’s value is still measured by her piety. The trend to present yourself as pious and virtuous has become paramount.

A woman’s piety is also seen as the necessary standard to be eligible for marriage. The narrative of what womanhood should mean is being created by men. It is hard for women to escape it. Religious Instagram accounts promote virginity, modest clothing, and submissiveness. This affects vulnerable young adult women who are looking for their place in the world. This narrative is positioned as the only way to be a good woman. The stigma for not complying to religious expectations has long inhibited women from expressing themselves fully. Women are also forced into competition with each other, resulting in toxic relationships between friends and relatives.

Young girls living in disadvantaged communities are on the frontlines of the fight against patriarchy. Their agency is being stripped from them. Privileged women who refuse to fight in solidarity with them may think that this won’t affect them – but in the future it will.

We need to challenge the dichotomy between the ‘bad woman’ and the ‘good woman’ and the categorisation of women in terms of religiosity. We need to teach by example; and alert younger women to the dangers of this ideology, and encourage them to achieve whatever they wish to do, despite the social pressures upon them.

Sisterhood is the most effective weapon in the fight against patriarchy.