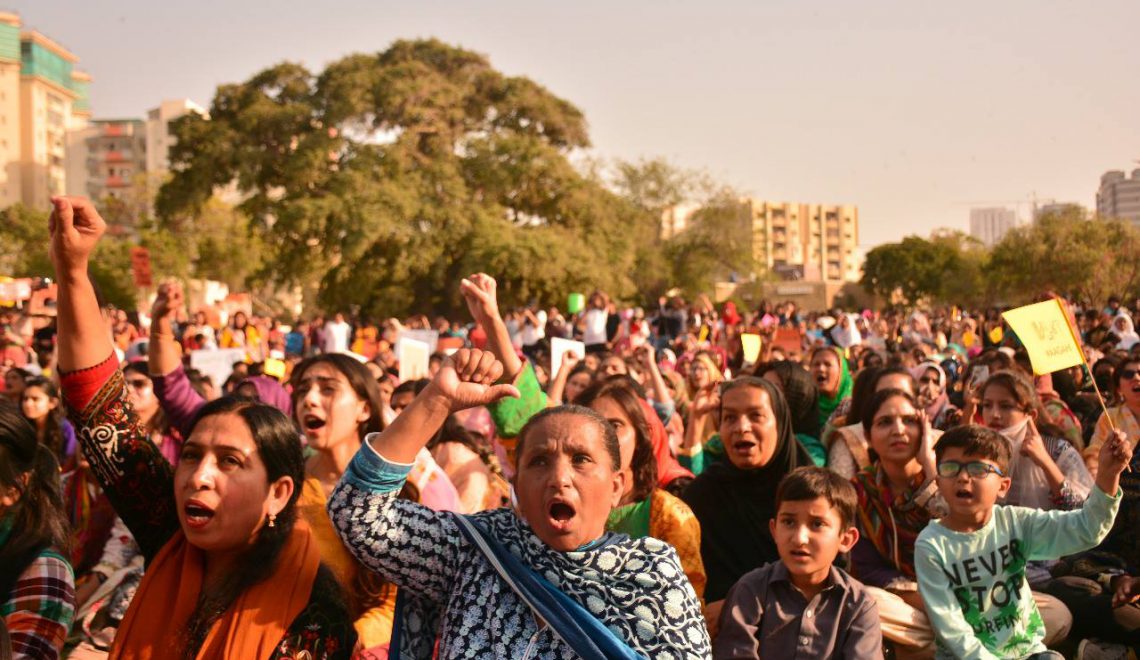 Without collective action women’s status will not improve – Bonnie Kreps

Let’s start with the basics. In Arabic, the term ‘awrah’ or ‘awrat’ derives from the root ‘a-w-r’ which means ‘defectiveness’, ‘imperfection’, ‘blemish’ or ‘weakness’ – with the implication of being something that should be hidden. In Persian and Kurdish, as well as in Urdu, the word ‘awrat’(aurat) derives from the Arabic word ‘awrah.’ It has been used widely to mean a ‘woman’. Awrat /Aurat is not a good word. It is an open insult to women. It is important for activists to know the implications of the language that they use. ‘Aurat’ is, in itself, a product of patriarchy, and as such activists should avoid using it officially. It would be preferable to replace it with khwateen or khatoon (terms which have historically been used by the Government of Pakistan).

Articulating what feminism is, and what it is supposed to mean and achieve inside Pakistan, is important. It appears that predominantly a very secular, western-centric interpretation of feminism is prevalent. Partially – and quite reasonably – this is due to the nature of funding sources available for feminist projects in Pakistan. It seems not to be part of the contemporary Pakistani zeitgeist to acknowledge the multiplicity within feminism and within Pakistani women. There are questions regarding how inclusive and integrated Pakistani feminism is in terms of reflecting the diversity of Pakistani women. Pakistani women’s rights activists need to remind themselves that, for all theoretical and practical purposes, feminism is not a homogenous thick strand. Yes – it has a common objective: women’s rights – but it has multiple sub-strands, each comprising a unique pathway to the same objective.

In Pakistan, there are secular feminists and socialist feminists; these mainly avoid dealing with Islam, and associate themselves with universalism in women’s rights movements. There are Islamist feminists; these occupy two extreme ends of the spectrum: those who consider feminism to be anti-Islam, and those who understand feminism and Islam to be compatible. Then, there are feminists who take a pragmatic approach, geared towards bridging up the gaps by maintaining a political balance whilst responding to the multicultural and multi-local pressures that they face. These pragmatic feminists avoid taking sides between competing aspects of feminism, Islam and secularism. Their objective remains promoting a diverse feminism strategically.  By and large, all of these sub-strands represent and promote either a radical feminist agenda (responding to sexism) or a liberal feminist agenda (responding to capitalism) or combine both agendas. Any future organizers of (what will hopefully be called) Khawateen March 2020 – need to strategically consider this multiplicity within Pakistani feminism.

Rights activists must consider the diversity within populations, and represent issues experienced by religious and ethnic minorities. Menstruation was a key theme in Aurat March 2019. Placards referencing the topic were a highlight of the March; social and cultural taboos were being publicly bypassed. Yet, none of the activists highlighting menstruation spoke up for the rights of the Kalash women settled up in the mountains and valleys far from the urban centres of Karachi, Lahore and Islamabad.

The Kalash are Pakistan’s only indigenous tribe. Among the Kalash of Chitral Valley, menstruation remains a religious taboo. In this day and age, menstruating women are considered contaminating within the Kalash community. Each month they are made to live in isolated, dilapidated housing called ‘Bashali.’ Several major international financiers have allocated funds for protection of the Kalash culture and religion. No one has focused on the   ‘Bashali’ structure and how it institutionalizes women’s low status in society, damaging their rights and well-being. Why?

In future, organizers should carefully draw the connections between civil society, social capital and agency. This connection will guide the organizers to strategically plan an objective-oriented activism – by which I mean activism based in a consideration of its rationale, content, expression and function.

Pakistani culture and religion have evident overlaps. Activists need to strike at patriarchy from within. Muslim academics have already done this quite successfully (for an example, read Asma Barlas). Pakistan’s cultural traditions are an interesting mix of oppressive dictates side by side with very liberating and progressive ideas (such as those found in folklore and Sufi chants). Activists need to incorporate this cultural capital into their feminist agenda, so that ordinary people in the streets can understand and relate to their cause. Women’s rights activists must prudently balance on the thin line between considering the diversity of viewpoints in public space whilst strategically asserting their own: taking a broad feminist standpoint which considers a multiplicity within it.

It is important for activists to recognize that the objectives of their movement cannot be achieved if the content and expression used in it is unacceptable to the perceptions and tastes of the majority of Pakistani women (let’s forget about appealing to men for the time being). Therefore, messages must be developed sensibly and strategically.

It does make sense to question gender normativity and make it appear more complex and multidimensional through performativity. This will allow Pakistani gender roles to transform gradually. It can be quite sensible to stretch ascribed boundaries, for instance, stepping into the zone of ‘religious patriarchy’ and in challenging the male monopolization of religion. Nonetheless, it is important to do this directly. Indirect messages that question the religious ethics and capital of ordinary women and men can be counterproductive. Also, ironically some provocative placards used in the Aurat March 2019 led to further objectification and trivialization of women and (as mentioned in Part 1), reporters and citizens were quick to make these placards go viral on social media. Put simply, the Pakistani nation may not yet be sufficiently educated and mature to absorb unmonitored, uncoordinated activism.

Activists must appreciate that feminism in Pakistan, whatever it has achieved so far, is the result of collective action, not collective behaviour. What distinguishes collective action from behaviour is the use of critical faculties and strategic planning which led by a critical mass of highly invested, and highly resourceful people who work in clusters and formulate larger groups. This critical mass has the ability to mobilise resources, understand socio-political processes within which they are located, and have the sensitivity, vision and operational sense to plan affirmative action which is strictly directed towards attaining clearly defined objectives. As for collective behaviour, this is what we witnessed in Aurat March 2019 – a crowd which, when it gets together, runs the show instead of the organizers! Women are expected to complete domestic, particularly child care work 24/7 and feminists such as Simone de Beauvoir recognize the difficulty, but also the need for women to stay organized and connected. The point being, organizers of such activist actions need to decide whether, in future, they can afford free riders and run the risk of creating negative fallout, or would they rather become more systematic in micromanaging the details of their collective action.

How many women want their daughters to start smoking in support of freedom? Why did such a message find its way into Aurat March 2019 – a march that was attended by teenaged girls? We need to be introspective and question our own superficial understanding of ‘freedom’ – a critical survival element of the human race to which women have a valid claim. Why assert it so cheaply – for a cigarette worth a few pennies? Women rights activists must appreciate that civil society is considered to be in the ‘public sphere’ within which opinions are formed, developed, and exchanged. Civil society emerges out of the ideals of democracy. In order to achieve a thriving democracy, a balance between individual, social and state responsibility is required. Put differently, activism has to be responsibly conducted so as not to damage a younger, potentially more impressionable generation.

Activists also need to clearly identify the structural and functional determinants of patriarchal oppression inside Pakistan. The content and expression they decide to bring into the streets could deal with these sources directly. Although Sherani no longer serves on the Council of Islamic Ideology in Islamabad, the Aurat March would have benefited from slogans such as: Maulana Sherani be brought to accountability – in this life and in the afterlife. Content for use in activism needs to be carefully drafted while carefully employing symbolism which is relatable to the man and woman in the street.

Social integration must be achieved. Any situation that appears to be incompatible with the values of a significant number of people and then comes under question must be considered a social problem. It takes the focus away from the rationale, function and the core objective. Self-defeating strategies can be avoided by keeping in mind that activism’s purpose is to create a public good. Inclusivity and relevance to the majority may be as crucial as feminist objectives.

Each year, the women’s march needs to be plugged into the past, as well as being reflective of contemporary successes and challenges. It is important to recognize institutional progress and to thank statespersons, judges, lawyers, chairpersons of relevant commissions and ministries (provided they have helped activists achieve progress), human right activists and professionals, funding agencies: men and women who have contributed towards women’s rights agenda.  These acknowledgements should not only take place in conference halls – but in the streets, through placards and speeches made for ordinary Pakistanis. It is very important to gauge women’s rights activism properly; successes celebrated, pending issues highlighted. It is unfair to Pakistan’s history of feminist activism to express too much negativity and too many demands for more without a judicious reference to the successes that have already been achieved

It is absolutely necessary to have a vibrant civil society that represents a feminist movement which ensures that women’s issues around entitlements, capabilities, their functioning, mobility and agency are sorted out and social problems are solved. Civil society can adapt, and grow really rapidly. We have seen this happen in Pakistan over the past few years. Aurat March 2019 is itself a reflection of how quickly Pakistan has moved on. The younger generation is fortunate in that it still has access to many of the pioneering and/or senior activists of feminist movement in Pakistan, for example, Khawar Mumtaz, Farida Shaheed, Kishwar Naheed and Neelum Hussain, amongst others. Our young people need to learn from them. Not only from their ideas – but also from their strategies.