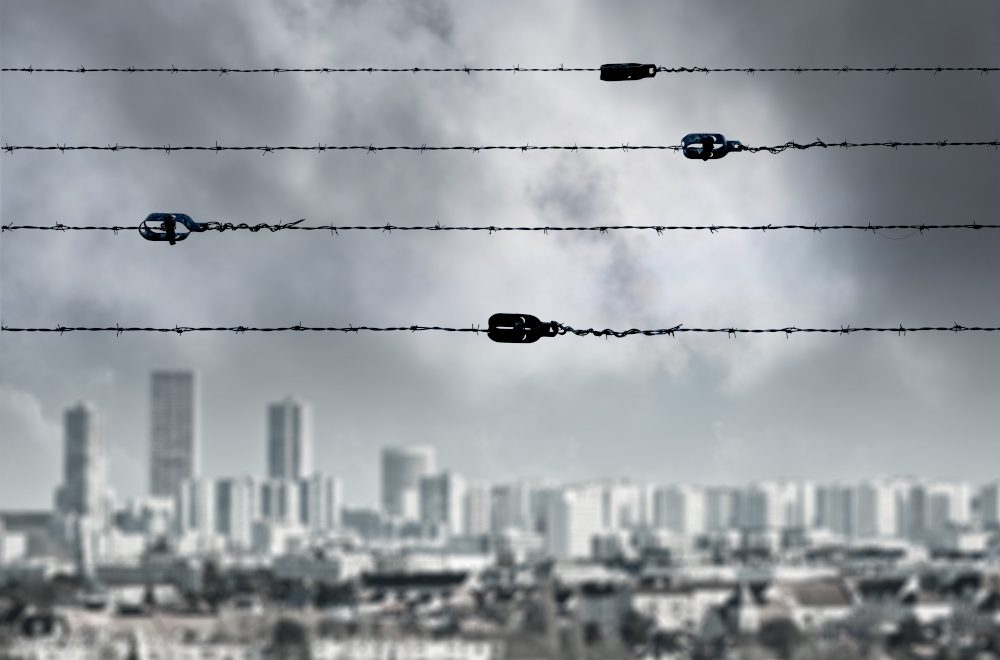 ‘We have created our very own separatism. It is a ghettoization which our Republic, with initially the best intentions in the world, has allowed to happen.’

Emmanuel Macron, President of France, laid out his vision of an ‘anti-separatism bill’ which he claims is necessary to reinforce secular values in a country which he argues must rid itself of a so-called ‘parallel society’ of radical Muslims. It seems necessary to agree with Macron that it is indeed the Republic – or its governing officials – who have allowed a form of separatism to take root in France. But the real scandal of separatism in France today is the economic separatism which divides poor neighbourhoods from wider society: ‘ghettos’ where 40% of residents live in poverty, compared with 16% in the wider population, and where over a quarter of people are unemployed, 15 points above the national average. This figure reaches 45% for young people. According to the French Commissioner on Human Rights, young Arab and black men in France are under-employed and over-policed – in fact, they’re twenty times more likely to be stopped by police than white people.

Police brutality has led to huge protests which have gripped some of France’s largest cities, in which locals decry the state turning the other way while officers behave with impunity. No-one chooses to live in these dilapidated, isolated neighbourhoods.  Everyone I know there is looking for a way out. The bitter irony for so many residents currently being accused of separatism, is that they’ve lobbied the state for years for ways to help them get out. Instead, they’ve been served up incessant stigmatisation, racial and religious stereotyping which is now a pillar of French ‘free speech.’ They’ve endured the near constant conflation of entirely innocuous Muslim practises – the need for prayer spaces, the right to dress in accordance with beliefs, and the accommodation of dietary needs, which, ironically, secularism was designed to protect from state intrusion – with the very legitimate concern of terrorism. All the while, the media has recycled the narrative that Muslims somehow represent an existential threat to the Republic. Its revolutionary founders would turn in their graves if they actually saw how their struggle has been instrumentalised by self-serving politicians and journalists, who distort history and ignore the driving force of the revolution: to overturn absolutist power, and elite privileges.

In these abandoned state-manufactured ghettos, families face an additional fear of their children being ripped from them by violence. L’insecurite, which the French press bemoan when it leaks into their leafy neighbourhoods, has always been first and foremost a concern for residents of these abandoned areas. It is they who confront the violence of lawlessness, of police brutality, of drugs and yes, of a vicious cult which targets families across France’s economic and political spectrum: Daesh.

Among the absurd measures announced to tackle this ‘separatism’ – which very quickly emerged as focused on alleged Muslim separatism – is a radical ban on home-schooling. This is likely to affect around 0.5% of students, many of them not Muslim, in a country which has seen this trend grow, not least following the success of cult French documentary Etre et Devenir (which has no particular connection to Muslims). So far, so very bizarre. In the country defined by liberté, it could become mandatory to place your child in school from the age of three years.

Next came the announcement that France would no longer be permitting the study of additional languages and cultures. These classes had been established as part of a bilateral agreement between the French state and nine countries, including Algeria, Croatia, Italy, Morocco, Portugal, Serbia, Tunisia, and Turkey. The implication appears clear: the nativist trope that you can’t be both French and Senegalese, or French and Moroccan, and so forth, is due to be enshrined in law. A position that was once white nationalist fodder – the harassment of multilingual French citizens for possessing an otherwise objectively valuable social asset – is being added to the centrist arsenal. The lurch to the right is a useful diversion tactic as the country faces mounting criticism of its handling of the COVID health crisis and seeks to stave off the challenge of the Far-Right by incorporating its hateful lexicon. Marine Le Pen, President of the National Rally (formerly the National Front) and her cohort of white supremacists no doubt feel deeply vindicated by the President’s own Minister of the Interior’s recent use of the controversial term «ensauvagement.» Ensauvagement is roughly translated as ‘descent into savagery’, which he used in reference to a series of violent incidents. The term was derived from a French far-Right author, and has since been widely regurgitated by Le Pen in public addresses. For many, its use by elected officials reflects the dehumanisation of France’s minorities as ‘savages’, to be controlled through Macron’s proposed tighter security measures. Echoing the colonial mind-set, French authorities would rather employ repressive measures to quash popular anger than consider the redistribution of wealth and power that might be conceded to equal citizens.

The suggestion that Muslims, their organisations, their places of worship, and even their ancestral languages (where they even speak one) pose an existential threat to Republic is not only a very poor reflection of President Macron’s faith in Republican values, but a dangerous normalisation of far-right tropes. In fact, studies suggests over two thirds of French Muslims support secularism and almost 80% say the religious identity of their political candidates is irrelevant to their vote. These inconvenient facts belie any accusations of separatism but feed into the latent perception that Islam is ‘incompatible with French society’ a view shared by over 60% of the French.

But it isn’t just facts the President has been ignoring. His willingness to spread fake news, drawing on fabricated scaremongering to score political point is more worrying. Macron referred to a football club which requested that its members shower with their underwear on as some kind of evidence of an Islamic take-over, despite the club making clear it was not a ‘Muslim’ club and that the measures had no religious basis. In another case of not allowing the facts to get in the way of a good Muslim-bashing story, Macron referenced a bus driver who was alleged to have refused entry to a group of young women wearing miniskirts, despite it later emerging that the refusal had been down to the fact the women were smoking and had refused to put out their cigarettes.

The French obsession with Islam has deep Orientalist roots. But although contemporary fantasist news stories about virginity tests (which are extremely rare according to French doctors), the fixation with niche Muslim practises such as women-only swimming classes (attended by women of a range of backgrounds) or the regular eruption of the tired veil/faceveil/burkini scandals might be derided as overactive Gallic zeal, for Muslims, this preoccupation represents a wearying daily stigmatisation.

Macron claims the anti-separatism bill is necessary to reinforce secular values – a point clearly being made by the bill’s presentation before parliament on the anniversary of the Law of 1905, which was the founding reference for the secular Republic. And yet, as Feiza Ben Mohamed, a French radio host and co-founder of Les Musulmans an umbrella organisation regrouping over 220 Muslim associations across France, states: ‘No Muslims are asking for a change to the foundational principles of French secularism – the 1905 law –so why are we being targeted as a community? Macron wants to control the flow of foreign funds to mosques. This seems very interventionist for a secular state, premised on the separation of religion and government, but fine, will this also be true for the Russian churches, or synagogues with Israeli funding? The irony here is it is the very people who claim to want to protect secularism (laïcité) in France who are pushing to change the law on it.’

They’re also the same people now demanding that the state controls religious expression. Macron juxtaposed laïcité and Islamic separatism, which he has claimed weakens the French republic, and announced a range of measures to control the financing of mosques, NGOs and the training of imams. The confusion for many French Muslims that I’ve spoken to is that the economic separatism which the state has largely been ignoring for decades, has laid the ground for criminals – in  range of guises- to terrorise local neighbourhoods and families. The residents of these ‘ghettoes’, many of whom struggle with future prospects and feel abandoned to their fate by the state have been totally neglected. It is within this context that some Frenchmen and women have been indoctrinated by rogue figures. The irony is, it has always been left to local residents, grass-roots associations, local imams, and families themselves to flag these concerns – which have long gone unheeded.

It’s worth recalling that the word ‘terrorism’ first emerged during the French revolution, when the state used threats of a foreign invasion and ‘counter-revolutionary activities’ in the provinces to justify ‘exceptional’ measures during a period of deep economic woes . As the academic Guillaume Ansart notes, during that period, ‘The Terror assimilated dissent to treason, to conspiracies hatched by counter-revolutionary elements and foreign powers bent on dividing the people to weaken the Republic.’ Ultimately what weakened the Republic was its claim to speak in one voice for the people rather than recognising – and respecting – its divergent perspectives.

While those outside the ‘ghettos’ chastise its residents when a car is set alight or a young woman is killed in a joyride – it’s as if there is no recognition that that car belonged to a local and that the young woman was from that neighbourhood. The separatism Macron claims to denounce is in many ways the separatism of those who have long looked the other way when it comes to the problems in the suburbs. Today, rather than confront France’ social and economic woes collectively, with solidarity and equality, they would rather play into schisms which ultimately only deepen the real divide facing the country. In two-tier France, the real divide is between those who wish to unite the wide range of people who wish to build a fair and representative society – and the dangerous coalition between white nationalism and the elites clinging to power. Macron is right. France does indeed have a problem of separatism, and his government is right at the heart of it.

Dr Myriam Francois is a journalist, filmmaker and writer. Her documentary “City of Refuge”, looking at the plight of Syrian refugees in Lebanon, aired on BBC Radio4 in April 2019. Myriam is also the presenter of BBC World Service mini-docs on Brexit in a small, Leave-voting town in Wales (Llanelli) (2019), and on #MeToo in the Muslim world (2018).