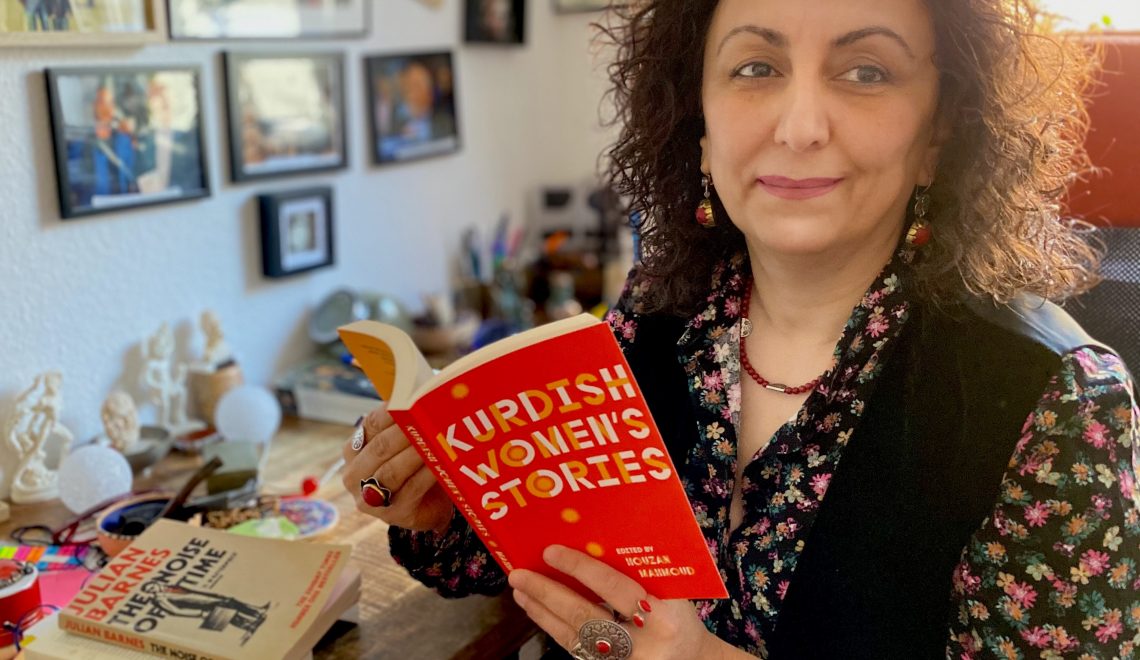 Houzan Mahmoud is one of the founders of Culture Project, and a writer, feminist and public lecturer. She has just brought out a collection of Kurdish women’s writing.

How did you go about collecting stories for the anthology Kurdish Women’s Stories? What were the challenges in gathering all these personal accounts?

I have had the intention of getting women to talk about themselves in the form of writing for a long time. It was not easy. I wanted the collection to reflect the diversity across the artificial borders of Kurdistan, not just sharing stories by women in one particular political group or region. So, I wrote a call-out in English and Kurdish, inviting women to write about their own lived experiences of exile, imprisonment, armed struggle, love, loss, art, poetry, and surviving gender-based violence. To my surprise, women started to approach me. I also approached women that I knew had important stories to tell, which they might not have thought of writing otherwise. I was humbled by the outcome: 25 chapters, each written by a different woman detailing their lived experience in their own words. Of course, due to the assimilation of Kurds in Turkey, Syria and Iran, language was a problem. Most people aren’t able to write in Kurdish in those territories. The only so-called official language in those countries is Turkish, Arabic and Persian. The Kurdish women in these countries wrote their stories in those languages: the language of the colonisers of Kurdistan. We then translated them back into the Sorani dialect of Kurdish, and then into English to be published for international readers.

Were there any stories that you found particularly compelling?

To tell you the truth, all of these stories are equally compelling, though of course there were several stories which moved me to tears. Stories written by women of unmeasurable bravery who endured torture, humiliation and degradation in Islamic prisons. Other stories of witnessing killings of their own beloved sons and fathers. Or stories of female freedom fighters, as well as those of surviving and resisting gender-based violence. Ultimately, these are experiences no individual on earth should be forced through, yet they are not uncommon in Kurdish society.

What’s the purpose of the Culture Project? What kind of content do you host? Who writes for you?

I co-founded Culture Project nearly six years ago to widen the space of writing and feminism for women – but to also include men in this endeavour. We publish articles, essays, poems, short stories and artwork. We also organise seminars and conferences both in the UK and Kurdistan. The aim is to bridge Kurdistan to its diaspora, and the wider world. We also publish books from time to time, such as this new collection of Kurdish Women’s Stories. For this particular project we had both men and women involved in translating and proof-reading, which was really nice. The team also helped with publicity, organising and writing about the book in Kurdistan. Our contributors for Culture Project feature established Kurdish writers – but also young and aspiring feminists, poets, writers, and scholars.

What role does culture play in women’s liberation?

For me it was important to reduce the gender gap in cultural production for women. For example, I wanted to get women’s short stories and poems translated into English, and to organise poetry reading and book launches for both women and men. We organised many seminars in universities across Kurdistan about feminism and art, feminism and cinema, gender and cultural production, as well as reflecting critically on various aspects of Kurdish culture and literature which reproduces outdated gendered norms and relations. At the time our approach was very new. Some people were not happy about our writers, especially our female writers who wrote about Kurdish literature from a feminist perspective. Also, we ignited many important debates about feminism and gender in Kurdistan. I am happy to say that we have become a hub for progressive people, especially the young people. We take a holistic approach, challenging misogyny and patriarchy at all levels. I personally believe that raising societal awareness about these issues can contribute to the advancement of women’s rights in the long run. We cannot achieve much if our culture and politics is not challenged across the board including at the highest levels of power.

How has Kurdish culture been shaped by decades of political repression?

Resisting fascism and living under dictatorship for decades takes its toll on people in many ways, including trauma, personal loss, and suffering. It also diverts your efforts from creativity and personal progress to learning the techniques of bare survival. It can delay and reduce your ability to innovate, to think, to create and venture out to the world. You have to live in constant paranoia, doubting everyone’s intentions and actions because within a dictatorship you cannot trust anyone. Dictators turn entire societies into volunteer spies, and if you don’t report on people who are active politically then you get in trouble yourself. Some people chose to collaborate, whilst others even sacrificed their lives to avoid collaboration. I grew up in a family which took up arms against such regime, and who never knelt down to the dictator. I grew up in Saddam’s hell witnessing events I should never have witnessed.

What are the major problems impacting Kurdish women in the world today?

There are various problems. One is that they are constantly exposed to genocide, war and erasure – in addition to Kurdish patriarchy. The latest war and genocide by ISIS and Turkey speaks volumes. Kurdish women are misrepresented and often stereotyped, either as victims of male violence or as warrior women with guns. There are obviously elements of truth in this, but this is a very delimited depiction, almost reductionist. The lives, histories and struggles of Kurdish women are varied, complex and more sophisticated than these stereotypical representations. I hope that our book Kurdish Women’s Stories can provide some diversity and nuance through the self-authored lived experiences of the 25 contributors from all parts of Kurdistan.

Kurdish women have developed a very strong feminist movement, especially in opposing male violence. Why is that? What barriers do they face?

Kurdish women in Rojava and North Kurdistan have specifically incorporated their own version of feminism into every aspect of life and their political struggle. This is what makes their struggle so different from others in the region, and the rest of the world. The only obstacle is the warmongering of Turkey, ISIS and other regional and international powers who do not want this way of organising to become a model for other countries. This is symbolic of women’s boundless power as individuals, and even more so as a collective.

You’re a secularist, and opposed to sharia law. Can you explain why you think secularism is important, particularly for women?

Secularism is not the end goal for me, but it is a way to keep religion out of personal status law, and possibly out of education too. I believe that humans should be free to practice, leave or change their religious or ideological beliefs as they wish. No one should be blamed, ostracised or threatened for believing – or not believing – in any religion. Secularism is particularly important for women when it comes to the right to divorce, to have custody over children, to have equal inheritance, the right to abortion and many more important human rights. Under Islamic law, these rights are not available, or are very limited. Hence, secularism is a precondition for guaranteeing certain basic rights for women.

What does feminism mean to you? How has it shaped your personal journey?

Feminism is the only set of ideals, understandings, self-awareness and consciousness that, as a woman I can adhere to and find my aspirations and struggle have meaning. I have been active in women’s rights for over twenty years, but initially, I didn’t see myself as a feminist. Feminism was demonised by Communists, Nationalists and Islamists alike. I was surrounded by leftists from Iran, Iraq and Kurdistan, and a large majority of them were anti-feminists, mocking anything that had a feminist basis. Maybe it was the sexism, racism, and male-centric politics from these self-styled communists that pushed me to read feminist literature to make sense of all the contradictions that they would conjure up to denigrate feminism. At the time I was member of the leadership of Worker Communist Party of Iraq. I resigned from everything. I spent a couple of years solely reading feminist literature. I was particularly impressed with Marxist, socialist, Black Feminist, and also radical feminist thought. I read how women felt alienated in leftist organisations in the 1970s, and felt the need to create women-only consciousness-raising groups, and organise around women’s issues from a feminist perspective. I started writing to introduce these feminisms, and their schools of thoughts and ideas, into Kurdish discourse. Ironically the first people who started writing back against feminism were women in the ranks of the former party which I had resigned from. It seemed like an orchestrated campaign against me. They attacked feminism and saw it as a threat to their so called ‘class struggle.’

Feminism changed me forever. I am forever indebted to all the amazing world feminist thinkers and activists who produced knowledge which has reached me, and made me stronger and more aware of my rights. No ideology or belief has ever had such an important impact on me. This is why I have now organised an online feminist school to transfer this knowledge and further introduce feminism, feminist thinkers and feminist schools of thoughts to Kurdish women and girls.

What are your plans and hopes for the future?

I want to continue to raise awareness among Kurdish women about feminism. I want to see them to value themselves, organise, and develop their own world-view and political opinions. I work with younger girls encouraging and mentoring them in writing and producing texts, and art form a feminist perspective. To me, feminism should be incorporated into every aspect of women’s lives and works.