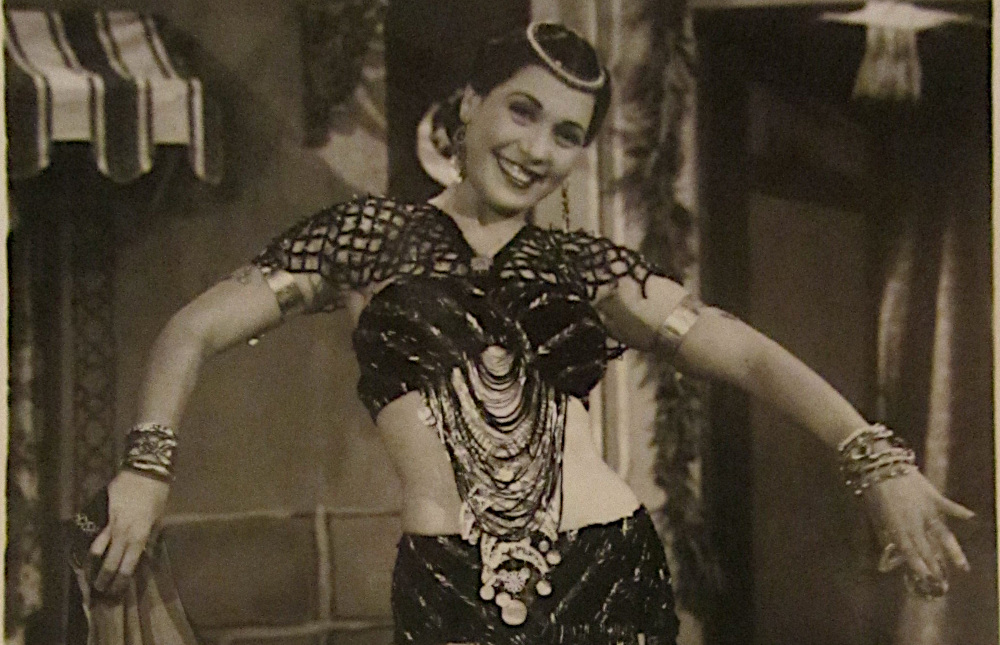 A lot of people think I am impolite but I am not…I’m straightforward. – Tahia Carioca

Tahia Carioca was a dancer and movie star, who became known as the Marilyn Monroe of the Arab world. She was one of the most famous practitioner of the dance known as raqs sharqi, commonly known as belly dance, and a pioneer of the form. She performed across the Arab world and appeared in feature films alongside its most famous actors.

She was born in Ismalia, in Egypt. Her father had married seven times. Tahia’s relationship with him and her brothers were difficult. Her eldest brother once shaved her head and imprisoned her in the house. Fleeing home at 13 years of age, she sought a place to say in a Cairene nightclub. This was run by Souad Mahsen, a former neighbour. She gave Tahia her first role. Tahia also studied dance at the Ivanova Studio. She claimed to have studied ballet for ten years before taking up Arabic dance.

Tahia was ambitious, and soon took on roles at the Casino Opera, which had produced many of the period’s best known dancers. It was run by Badia Massabmi, a woman from Lebanon. The building’s décor had a colonial theme, and attracted an audience of British administrators and Egyptian aristocrats.

Originally called Badawiya Mohammed Karim, her stage-name expressed her artistic persona. The term ‘Carioca’ means originating in Rio de Janeiro, and also a dance style characterised by Brazilian rhythms, associated with Carmen Miranda, Ginger Rogers and Fred Astaire. Tahia asked her percussionist to imitate this style, and he and she both became known as ‘Carioca’ from that point onward. By 1936, her dancing was well-known enough that she performed for King Farouk. Legend holds that she slapped him after he dropped an ice-cube down her clothing.

In 1935, she launched her film career with a film called Doctor Farahat. This would be the first of over a hundred films she appeared in over her career. By the 1940s, she was taking on leading roles. She starred in the film Aheb al Ghalat (I Like Mistakes) in 1942. She also took on a major role in the 1946 movieLibat el-Sitt(also known as The Lady’s Puppet or La femme et le pantin) alongside charming ‘bad boy’ actor Naguib al-Rihani. In 1956, she played a seductive landlady in the film Shabab emra’a (La Sangsue or The Leech) which was screened at the Cannes Film Festival. Later she appeared in television, playing roles in soap operas until the end of the 1980s.

She was politically active in supporting the rights of artists and performers, and was even imprisoned for political activsm. She and her then husband Mostafa Kamal Sidiqi were arrested for plotting to overthrow the regime in the 23 July revolution of 1952. She was held for three months, but never charged.

She gave up dancing in 1963, but ran her own theatre in Cairo for another 20 years, producing, directing and writing plays. Tahia’s many husbands – at least 14 – included an American soldier she had met during WWII, but she missed Egypt too much to remain in the States. She also married the singer Muharram Fuad, and the actor Rushdi Abaza.

She was a close friend of Umm Kulthum, who had been a friend of her mother. Umm Kulthum reserved a front-row seat for Tahia whenever she attended a performance. On one occasion, Umm Kulthum, seeing Tahia dancing backstage, dragged her onto the stage to perform whilst she sang.

Tahia never had children of her own, but adopted a girl called Atiyat Allah, as well as caring for her many stepchildren. In later life, she turned towards Islam and took up the veil for the first time. She died in 1999 of a heart attack.

In a tribute written upon her death, Edward Said remembered meeting Tahia when he was a young, comparing to her to a well-known courtesan in a novel by Gustave Flaubert:

A decade ago, when I spent the afternoon at her nondescript apartment, she seemed to me a great Nanaesque figure who had indulged and then dismissed her appetites, and could sit back, enjoy a coffee and smoke with a perfect stranger, reminiscing, making up stories, reciting set-pieces (‘when I danced, I felt I was entering the temple of art,’ she said with a great deal of mock-seriousness), relaxing but still evasive.

The Egyptian minister for culture, Farouk Hosni, led her funeral procession, signifying that Tahia’s cultural importance, and her efforts to raise the status of Middle Eastern dance, overshadowed public perceptions of her life and work as scandalous.