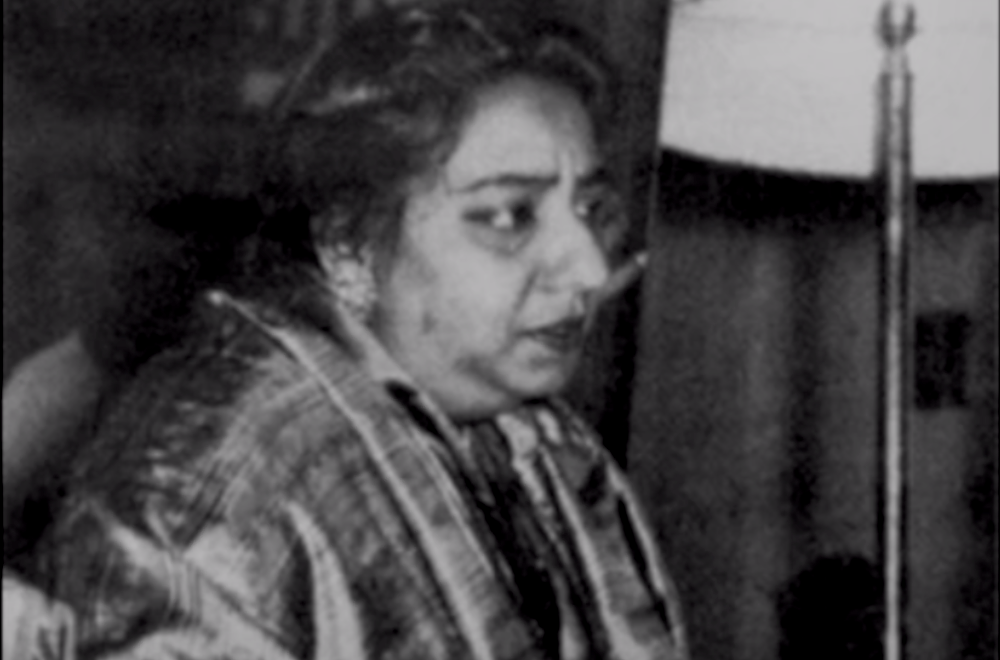 Now I just spend my time in prayer and praise God through my ragas. – Roshan Ara Begum

Roshan Ara was known as the Queen of Music, a master vocalist. She sang in classical South Asian musical traditions, associated with the melodic Kirana Gharana style. Despite being one of the most famous singers in this style, she eschewed stardom and lived modestly, combining domestic life with a creative career. Her singing was described as delicate but full-throated, with a wide vocal range.

She was born around 1917 in Kolkata, and originally called Wahidunissa. Her singing career was started when a fakir impressed by her singing talents told her she should change her name to Roshanjahan, to better express the beauty of her voice. After performing as an actress in the film Noor-e-Islam, however, she became know by the name Roshan Ara. Her musical training started from nine years of age, studying with Laddan Khan Sahib who played a sarangi, a bowed string instrument used in classical Hindustani music. She studied with him for three years. From her teens she was performing in the houses of wealthy citizens in Lahore, Bengal and Bihai (where her family came from originally), with the encouragement and support of her mother, Chandra Begum, who was also a singer.

In the late 1930s, she relocated to Mumbai to live with her aunt and study under the tutelage of Ustad Abdul Karim Khan, who considered Roshan Ara as one of his own daughters. He was reported to have said ‘O Allah, let this girl illumine the world of music, and let your light rest upon her throat.’ Roshan Ara broadcast her singing from the All India Radio station, and where she was announced under the title of Bombaywali Roshanara Begum. She also provided background singing for the films Pukar, Jugnu and Kismat.

In 1944, she married Chaudhry Ahmed Khan, the Deputy Commissioner of Police in Mumbai on her mother’s recommendation. It was said he had fallen in love after hearing her sing at a concert. Roshan consulted her tutor and agreed to accept the match – on the condition that she would be able to continue her singing career.

Eight months after Partition, when the system of patronage that had supported artists and musicians collapsed, the couple migrated to Pakistan. They settled in Lalamusa, a small town in Punjab. Here, she lived a quiet domestic life with her husband’s family. The couple adopted two children – a boy and a girl. Roshan Ara was also fond of her pet cats and birds, and raised livestock. For over a year, she didn’t sing professionally – possibly due to resistance from her husband and his family, and the lack of access to musicians able to accompany her. As Fawzia Afzal-Khan observes, one reason was that a profession in singing Hindustani music was not considered to be respectable for a married woman.

Roshan Ara rehearsed at home using a tape-recorded track of a tabla (double drum) and tanpura (lute) created by her husband to help her maintain her rhythm and pitch, and began her rehearsals after she finished her morning prayers. Although she remained resident in Lalamusa, she began to commute in and out of Lahore to perform, both live and via broadcasts at Radio Pakistan. She did, however, cease giving private performances, unless they were pre-approved by her husband who checked that the hosts were sufficiently respectable. She only left Pakistan once after settling in Punjab, travelling to Delhi to perform at the house of fellow classical singer Naina Devi.

She recorded songs using in films throughout her career, from Pukar in 1936 to Neela Parbat in 1969. In 1959, she became one of the founding members of the . In 1960, she was awarded the Sitara-e-Imtiaz award – being the first female singer to receive this honour from the President of Pakistan, as well as the Pride of Performance award. After Zia al-Haqq became president in 1976, Pakistan became less welcoming of the arts, and female artists in particular. Roshan Ara never passed her skills on, expressing frustration at a younger generation unwilling to devote the time and attention necessary for mastering South Asian musical traditions. She died in 1982 of a heart attack.