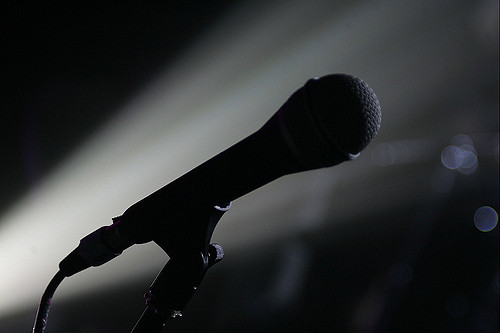 Hi Hana… this is a long shot, but would you be interested in continuity announcing?

I had a quick Google. The email was referring to people who talk on the telly. Or rather, the ones who introduce, and then talk all over the end credits of the programmes you watch. It sounded great; but there was a problem. I wasn’t an actor, nor a radio presenter, nor anything else that I thought might help.

It was September 2014. The email was from a man named Gary. I’d met him for the first time the year before when I did a beginners’ voice over training course with him. In the intervening months, I’d bought some home-recording equipment, joined a few websites, auditioned for loads of projects, and booked some of them. As a fledgling freelance voiceover artist, I had a long way to go and a lot to learn – not least whether I should be spelling it ‘voiceover’, ‘voice over’ or ‘voice-over’ on my Facebook page. So I was happy to have this random, somewhat showbiz, job on the side.

That is, I already had a ‘proper’ job. Having failed to go into Medicine or Law, I had persuaded my Bangladeshi parents that Teaching wasn’t so bad. I’d always loved reading, writing and discussing stories so it was a no-brainer for me to study English Lit for as long as possible before I had to get a real job. A few years into my teaching career, I came across an interesting sounding course and contacted my then future trainer about going into freelance voiceovers. I’d always liked reading aloud too, and thought it might be fun to voice audio books or e-learning.

Back to that email. Clearly, I had my doubts, but Gary thought I might be a good fit for Channel 4 and urged me to make a demo. So I did. It was a bit rubbish. He gave me good feedback and made me do it again. And again. Eventually it reached the ears of Paul, the Continuity Manager at C4. He asked me to meet him there for a chat.

Suddenly, I had a foot in the door. A foot that all the What Ifs in my head were trying to kick back out.

What if he took one look at me and decided that I wasn’t a good fit after all?

What if I took one look at the place and ran scared?

What if my folks freaked out and thought I wanted to ditch teaching altogether and be on TV instead?

And a ‘chat?’ At the headquarters of a major national television channel? That couldn’t possibly be the kind of chat that I was used to. They usually involved a mug of tea and a packet of chocolate digestives. How would I swot up? How would I look, act, breathe? Aside from a few wildly varying voiceovers that I’d done from home, I’d only ever been a teacher. None of my friends or family had worked in anything related, so the anxiety production part of my brain was practically steaming. And then there was that other part of my brain. The one that said that I was just a small, brown, soft-spoken, hijab-wearing, working-class woman and what on earth was I playing at? That part of my brain can be pretty loud. Especially on the subject of exploring very niche and competitive jobs in austerity Britain.

Luckily, there’s another part of me that’s pretty stubborn. So, on the last day of term before the Christmas holidays, I scoffed my Halal turkey dinner, and got on the tube to go from my college in East London to a very fancy building in Victoria for my chat.

It lasted twenty minutes. Less time than it had taken for me to swap my glasses for contacts, put on my make-up, re-pin my hijab, and change into my heels. It turned out that Paul was really nice and it really was just a chat. He even offered me tea and biscuits. He wanted to know how I’d got into voiceovers, what attracted me to continuity, and what days I might be free to work if I got the gig. Looking back, he probably just wanted to make sure I hadn’t kidnapped someone else and stolen their voice for my demo. My foot was still in the door, and the door opened a crack wider.

New Year 2015 came and went. I was booked in for a couple of days of training later that January with a woman called Isla, one of the senior announcers at C4. My training would involve a day in the office at HQ writing scripts, and then a day in the broadcast building in White City, where I shadowed Isla on her live C4 shift and practised recording.

Day One was really cool. I tried not to stare at all the screens and the posters and the people, wondering if I was wearing the right thing and trying not to play spot-the-non-white-person (bonus points for a hijabi!), but everyone was pretty chilled out. I realised just how much info you have to cram into those announcements. They are written at least a day beforehand and delivered live within strict timings. And you couldn’t fluff your lines. And you had to sound natural. And funny. And yourself. Eek.

Day Two was another learning curve. The C4 multi-channel suite was a revelation. I had never seen so many screens. Imagine a dimly lit room with no natural light and about three or four people at the front with at least nine screens each in front of them that they’re supposed to be keeping an eye on, while they are talking, typing, and answering my newbie questions. Yep, network directors are also awesome.

I’d written everything I needed to the day before, so I watched Isla at work. Isla has a smooth, South East English-accented voice. Her writing is punchy and full of puns, so it was great to glean tips from her. Her other duties included emailing lawyers and commissioning editors to check warnings and wordings, doing a read-through with a bunch of people via conference call, and then going into the C4 booth to take over the live announcing. I tried not to stare (again) at all the new buttons and clocks and screens that were in front of us.

The night whizzed by. In between live announcing and rehearsing it was fun chatting about the nuts and bolts of the job. I recorded the lines that I’d written. We tagged them into the system so that they’d air later (post-midnight announcements are pre-recorded). When I was done, I thanked Isla. She said that they’d get back to me. I made my way home, buzzing from the whole, rather surreal experience.

The rest of January came and went. I emailed Paul what I hoped was a brief, polite enquiry in February. He replied that he’d enjoyed listening to my recordings and liked my tone, but said that I needed to be more conversational. He’d come back to me when they could work in more training, he said. That was sort of promising, so I said thanks, and waited.

I waited as February shivered into March. I waited as March melted into April. I waited some more while April became May and May drifted into June with still no word. I quietly despaired. ‘Who had I been kidding after all?’ I thought. They’d just been humouring me because they knew Gary. They were just ticking an equal opportunities monitoring form somewhere. They weren’t really interested at all.

Meanwhile, Gary had got in touch to ask for an update, so I filled him in, feeling guilty for wasting his time. But he said they were probably busy and I should just email them to give them a poke. So I did. I received a reply from Paul with the offer of further training in July. Relief and excitement flooded me. I was still in with a chance. But I told myself not to get my hopes up, just in case.

Further training was a second day at HQ, followed by a second stint in the C4 booth. This time I shadowed a man named Barra, another senior announcer. We focussed on putting more of my personality and energy into my announcements. Barra was very funny with a warm, Dublin brogue and a fragmented, kinetic style. This helped me to relax and to pick up a few more tips. So, once again, I did my recordings, thanked everyone, and headed home. I’d loved it, but I wondered if I’d ever hear from them again. It was unlikely that they’d give me a third chance if I didn’t show improvement, so I also prepared myself for the end of this road.

Two weeks later, in August, I got an email from Paul: Hi, Hana. We were impressed by the work you did with Barra a couple of weeks ago and I’m pleased to say we would like to progress you as a freelancer… The relief and excitement felt different this time, more solid. I’d done it. I was going to be an announcer at Channel 4 Television. Millions of people would hear my voice.

Three years later, they still do. On Channel 4, More4, and occasionally on E4 and 4seven. Mainly on a weekend or during school holidays (I still teach, so it fits around my classes). I like that side of it too: the flexibility and freedom to pursue other projects, other ways to hone my voice and to express it in more than one medium.

So, moral of my story? Face your insecurities and never give up. Because, of course, it was never about being a hijabi or not. It was about talent, belief and perseverance. Which reminds me of another thing. I recently came “full-circle” and had the pleasure of helping to train a new freelancer called Suzi. She’s also a teacher, and she works in local radio. She wanted to shadow me in preparation for her first solo live C4 shifts. It was a Sunday. While chatting in between our duties, she mentioned that she’d been on Paul’s list for seven years before he called her back.

I stared at her. ‘Seven years? Seven?’

‘Yep! They’d just hired a Geordie girl with a similar voice,’ she said in her cheery, Hartlepool lilt, ‘So, I’d just missed out. Good thing they kept me on file, eh!’

Farhana Khalique is a teacher, voiceover and writer from SW London. Recently, she was shortlisted for The Asian Writer Short Story Prize 2018, and won a Word Factory Apprentice Award 2018. Her next story will appear in Issue 1 of The Good Journal.