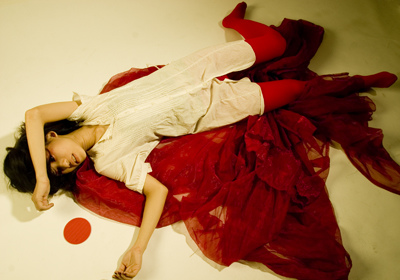 On first words and first periods.

First words are a lie. We don’t suddenly find words falling out of our mouths as infants. We don’t suddenly gain the ability to make sense. I learned that through spending six months with my two-year-old niece who, slowly but surely, stuttered her way to shame.

‘عيب’ became one of her favourite words, probably dropped into her little round mouth on the changing table, her soft skin creepily politicised and prohibited as it struggled to escape the constraints of an overworked mother.

A marriage of shame and vice bred through years of obsessing over and fearing women’s bodies, aayb became a game she played with. If your shirt rode up your stomach to reveal some of your skin, she would point her chubby fingers at you and smile as she pointed out your crime. The surface this shame covered expanded and morphed, till she was met with smiles every time she pointed at her face and said the word. It was a game they all enjoyed.

‘Let her learn from now,’ my mother would say, as if hiding her body was an inevitable end to her childhood. It probably will be.

I was wearing white on a red-hot August afternoon when I menstruated for the first time. I was awaiting my period like it was a limb that would make me complete, like it was a key that would allow me into the secret society of womanhood. My white pants began to bloom into florets of red, and my mother’s eyes grew wider as she began to realise what was happening. She quickly shoved me into a room that was unoccupied by the many visitors who were at our home, and gave me three items of clothing; a pair of dark pants, large black underpants, and a jacket. After she had cleaned up the ‘horrible mess I’d made’, I tried to leave the room and go back to playing with the other children. She stopped me and put the jacket over my uncovered shoulders. I didn’t understand. What had changed about them that they were free to show only a few minutes before, but now had to be hidden?

I thought womanhood would change me, that I would suddenly feel sure of myself and secure in my body. But, as I eventually learned, the womanhood I inherited from my mother, the same womanhood she inherited from her mother before her, meant one thing only; I now was an object that was pursued and protected.

My niece’s shaming game grew more and more. By the time she was almost two, aayb no longer needed a reason to be expressed, any arm that came into her vision, even her own, would be called out. But then, her little game grew out of bounds.

Small soft steps on the Persian carpet led my little niece closer and closer to my father’s stomach, rising and setting in deep breaths as he enjoyed his afternoon nap, resting his head on the couch and listening to the news. Her plump fingers reached onto the rise in front of her, and she pushed up the soft cotton of my father’s undershirt. ‘Aayb!’ she screamed out, turning to her mother and the rest of my sisters, expecting the usual smiles and doting looks she would receive for partaking in this silly game they seemed to enjoy so much. Instead, hairy and harsh, my father’s arm closed in on her little fingers and put them quickly away, as he erupted in laughter that turned the rises and falls of his stomach to the rumble of a volcanic mount.

‘She thinks it’s for everyone,’ he said as his crude laugh grew loud enough for the rest of them to be comfortable with smiling about the incident. Her mother hurriedly pushed her away from my father and put a colourful plush toy in her arms, but the child was surprised at this sudden change in reception of her little game. She didn’t understand.

I hope that when the day comes that her mother hands her the eventual jacket inherited with our brand of womanhood that she remains uncomprehending of this system that brands us.

Gee is a young queer woman living in Beirut in a conservative muslim family. She is a writer and hopes to one day be able to use her full name.