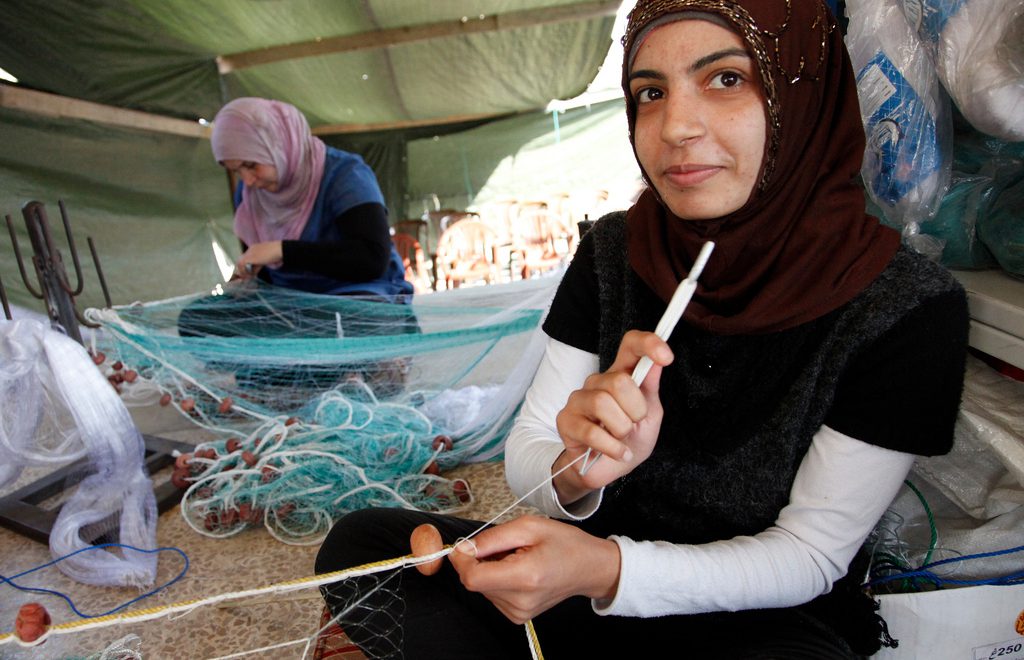 Refugees and the media in Lebanon

A poisonous attitude has emerged among the media reporting on the refugee crisis in Lebanon, says Sawssan Abou-Zahr. Bias and racism are being used to blame domestic problems on those fleeing war – and distracting from the real issues.

“They are everywhere… Who knows, maybe someday I will get fired and one of them will take my place.”

This was a famous Lebanese ancho rwoman, known to support the Assad regime, speaking live on a primetime talk show.

A reporter, covering a horrifying murder in the Bekaa valley, said the victim had a “non-Lebanese accent” – implying he was Syrian, as if to justify the crime.

You could say the reporter was inexperienced. But no one saw fit to issue a clarification, for something that was broadcast multiple times.

The same television station has produced segments claiming that “one economy cannot support two people,” targeting the few opportunities Syrians have to work in the informal economy.

When Lebanese fire fellow countrymen and hire Syrians who agree to work for longer hours and less money, this is clearly a biased approach. But the television station will not highlight this fact. Accusing Syrians of stealing Lebanese jobs is a populist trend and appeals to its audience.

A prominent newspaper once published that Hamra Street, the most vibrant and diverse in Beirut, was invaded by “dark skinned Syrians.” This is blunt racism, not to mention ridiculously inaccurate. Even after wide objections on social media, the editorial board declined to apologise.

In another incident, the newspaper claimed air pollution in the country is caused by the influx of refugees. They deliberately forgot about the deforesting of the coast and mountains, as well as the poisonous effects of the ongoing garbage crisis, which has resulted from the corruption of politicians but, again, been blamed on Syrians.

The collapse of ethical standards?

As a journalist, I am deeply troubled by these events. Unfortunately, they are the rule, not the exception. A colleague once told me: “I put Lebanon’s interests first, you should too… the Lebanese war was fought to keep Lebanon for Lebanese and expel foreigners. Will the so-called refugees force us to another war? Think of unemployed Lebanese every time you write about Syrians or help them. It is not a matter of humanity but of patriotism.”

I looked at him as if hit by lightning. Patriotism? War? Who is the enemy here? Young Syrians struggling to work and study? Girls who are victim of early marriages, sexual exploitation and human trafficking? Does reporting on that make journalists ‘unpatriotic’? Should we ignore the presence of fraudulent associations established to get funds that don’t go to refugees at all, or praise Lebanese highly paid by international bodies to help Syrians in need but who despise them?

After a moment of silent shock, I answered by referring to the code of ethics adopted by Lebanese media in 2013. Article 3 states that the signatories “denounce racism and abstain from insulting human dignity in any way.”

Racism in the media

I abide by that, knowing it is an unpopular choice. Growing racism towards refugees is a social attitude endorsed by mainstream media instead of defying it. A few months ago, some journalists questioned the real reasons behind the death of Syrians detainees after a military raid on refugee camps in Ersal in the Bekaa. They were attacked and threatened on social media.

I am afraid the colleague mentioned earlier described the situation well, even if it wasn’t his intention; it is blind patriotism – obedience, to be more accurate – to the political and military authorities, rather than humanity and independent thinking.

This is a scary equation. Can we not be patriotic and refuse violations of human rights at the same time?

However, there might be another, deliberately undermined side of the story: that refugees are not a social and economic burden.

Professor at the American University of Beirut, Dr. Nasser Yassin, decided to address the Syrian refugee crisis with facts and figures that defy the mainstream racist rhetoric, as part of the #AUB4Refugees initiative.

Very few knew that $378 million is the total amount paid in 2016 by Syrian refugees in rent for local landlords in Lebanon. In addition, 84% of new businesses established near refugee settlements in Lebanon between 2011 and 2014 were owned by Lebanese who benefited financially from the Syrian presence in their neighbourhoods. $22 million is spent monthly on food by Syrians in local stores and markets.

Although these figures are present online and were already provided by Lebanon’s General Directorate of Real Estate Affairs, and the UN, many media outlets chose to sideline them because they contradict their biased rhetoric. Some claimed, in a silly conspiracy theory, that the American University of Beirut had a hidden agenda of promoting the permanent settlement of refugees in the country. In all cases, those in doubt never provided reliable statistics that prove the researchers wrong. Is it not time to get rid of hate speech and realise refugees are not to blame for everything?

The small world of Lebanese media

As a journalist, I believe the shameful performance of media organisations in regards to the refugee crisis reflects the deep deficiencies in the media system as a whole.

Lebanese television stations are generally owned by sectarian political parties or wealthy businessmen with political ambitions. They are propaganda tools. Newspapers are family property. Current media laws make it extremely difficult for independent journalists to establish new newspapers since they impose complicated procedures and the need for a fortune.

The online media could provide a modern and affordable alternative. But the available websites lack minimum standards of professionalism in an attempt to reduce their expenses. They hire young graduates with insufficient knowledge of Arabic and the basics of reporting and writing skills.

The media in general ignore the importance of investigative journalism, and don’t provide or finance training for their employees on new genres in reporting, such as covering refugee issues, migration and the humanitarian crisis. In addition, there is an immense gap between theory and practice in the outdated curricula of journalism in universities.

Writing their own stories: migrants and the media

I was a panellist at the World Press Freedom Day 2017 Celebration in Jakarta, in a session on the portrayal of migrants and refugees in the media. When asked about the possibility of refugees making their voices heard in Lebanese newspapers, television and radio stations, I answered that it was possible in theory, but impossible at the moment. International donors will have to provide the funding: refugee journalism will be done if it is financially rewarding, but not because it is ethically and professionally right.

Refugees are capable. You can easily find a young refugee writing a diary-like-testimony, or producing video segments on daily life in a camp. In fact, many do it already on their Facebook accounts. All that refugees need is a platform. To be fair, there have been some attempts to give them the chance to express themselves. One project worked with children taking pictures of their new surroundings, as a means of adaptation and healing from war trauma. But this was launched by volunteer photographers, not journalists, and was limited because of its scarce resources.

I hope we can copy in Lebanon a recent experience in Jordan. The UNHCR helped finance a local free publication, made entirely by Syrians, in Al Azrak camp. The content included cultural stories, puzzles and informative articles on refugee rights written by other refugees. I felt proud when reading about it, yet sad that this publication, The Pulse of the Camp, was not launched in Beirut or the Bekaa.

A severe financial crisis in Lebanon, rooted in corruption and mismanagement, has led to the closure of print publications and the unjust layoffs of thousands of journalists, without legal and financial compensation.

Reforming the law and the unions is needed more than ever to modernise and save the media sector in Lebanon, a vital democratic tool in a volatile political system.

Long-sidelined journalists and media workers should have equality in decisions, which are often dominated by cartels of shareholders who are mainly sectarian politicians and the unqualified heirs to media businesses.

This will be a long journey, but it is a righteous cause that I and several colleagues are struggling for. We are convinced that by fighting to protect our professional, legal and financial rights we will be empowered and equipped to defend our ailing democracy and the underprivileged in our society – both Lebanese and refugees.

This post was originally published on the blog, Insight on Conflict and has been reproduced with permission.

Sawssan Abou-Zahr is a Lebanese journalist, editor and consultant. She covers issues related to the Arab Spring, women, Syrian and Palestinian refugees, radical Islamist movements, and Afghanistan, Pakistan and Iran. Since 2014 she is local peacebuilding expert for Peace Direct in Lebanon. Peace Direct's website Insight on Conflict highlights peacebuilding efforts all over the world and is a leading source in the field.