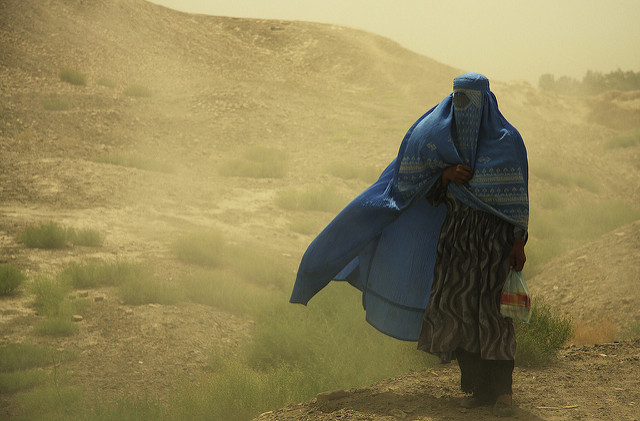 Sexual abuse is one of the main reasons why women are held back in the Pashtun regions. Most Pashtuns value their ‘honour’. They don’t want their social status to be threatened. This status is based on the respectability of the women in their family. Pashtun families keep their women hidden behind curtains (in purdah or under burqas), and limit their movements in order to preserve their reputations.

Despite these measures, women are victimised in their own houses by their neighbours and relatives. Jawirya is a survivor of sexual abuse: she was sexually harassed by a member of her own family. She was taking a bath when her cousin came over to her house to meet his aunt, who was not at home at the time. He called out for his aunt several times with no response. Jawirya heard him shouting, and eventually called out to explain that her mother was not at home. He came to the door to hear her voice and also heard the sound of the water draining from the bath. He tried to open the door; it was flimsy and gave way easily. He grabbed her. She tried to struggle, but could not escape his grip. She was scared to shout too loudly because of the risk to family ‘honour’ if she were overheard by neighbours. Her cousin raped her then went home.

Jawirya was traumatised. She felt there was nothing she could do. She told the entire incident to her mother when she came home. Her mother told her to stay silent in order to protect their family’s prestige. She could not marry her daughter to a relative. This is because of a Pashtun practice known as ‘the purification of the woman’. If a woman is not shown to be ‘pure’ (a virgin) for her husband, she will be killed on the wedding night by her parents or her husband. If her husband believes that he has not broken her hymen during intercourse, if she does not bleed, it means that she is ‘impure’. Many brides have been killed for this reason. Most often, the ‘one-night bride’ is sent back to her parent’s home on the basis of this supposed ‘impurity’, without any discussion. It is always her fault. Jawirya did not tell anyone about the rape. Her mother refused any requests for her hand from within the family and married her to an outsider.

In the Pashtun region, this sense of family ‘honour’ and the fear of sexual harassment are reasons why women and girls are often unable to get a standard education or to go out to work. Sexual harassment is an issue holding women back internationally, as shown by the #MeToo trend on social media. Male teachers often work in the higher status schools, so parents refuse to allow their daughters to be educated there. There are more men than women working in offices, so elite families disallow their women from office work.

Most abuses occur when women and girls are on the way to their workplaces and educational establishments. Girls are scared of sexual harassment on their route to school or college. There are no strong regulations in place to discourage this; sexual harassment is concealed for the sake of protecting a family’s ‘honour’ and social status. Social media responses and campaigns around harassment may make a difference for some Muslim women, but the impact for Pashtun women is limited; it is difficult to overcome cultural conditioning in order to speak out.

There are many women who have experienced sexual violence in the course of their work. They don’t report harassment for financial, professional or personal reasons. Women fear backlash; some simply do not know the avenues by which to report abuse. Most organisations don’t have proper procedures for reporting. In my opinion there are three factors that limit women in Pashtun society. Firstly, the fear of sexual abuse; second, taking on the entire responsibility for maintaining a home and raising a family, and thirdly, the influence of family ‘honour’, culture and tradition. Women who go out to work may not be allowed to wear traditional dress. This means that some women’s families will refuse to allow them to take a job. In the Pashtun area, responsibility for the home and for raising children is put on women from the beginning. Women may be awake all night caring for their children and then have to go into work in the morning. I salute the brave women who are managing to do all of this.

Sexual harassment is a serious, unreasonable and reprehensible type of behaviour, and yet it is routinely practiced in many workplaces. This bitter truth reflects the current status of working women in the world today. Empowered women are strong: but if they face sexual harassment in the workplace, many factors make them reluctant to make allegations against the culprits. This includes a fear of losing their jobs, and embarrassment or shame at being harassed.

There should be an organization that provides legal protection to women in cases of harassment in the workplace, and who campaigns for reforms of existing legislation regarding women’s rights. Unless all women speak out on this issue and come forward to report it, sexual harassment will continue. If we don’t start talking about this problem, we will never solve it. We have the power to bring many social problems that are currently hidden into the light. If we can find our courage, and unite with the brave women who are already speaking out, we can create positive change.