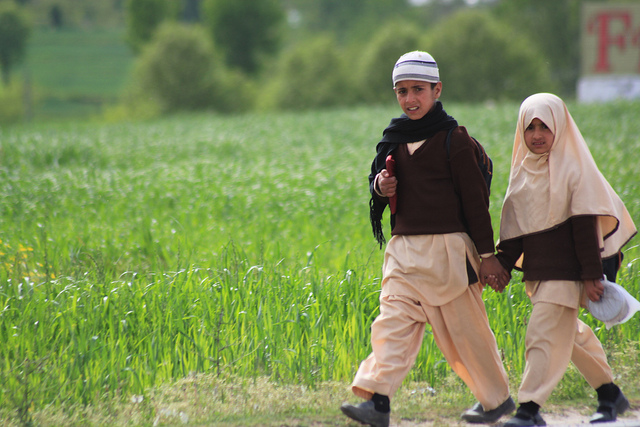 No segregation in education

Pashtun culture insists upon a strict gender regime, separating women from men. Women are not permitted to compete with men, or even to speak with them. When women have to go out of their homes, for instance to the market, they feel hesitant and unable to respond to teasing. Women are made to be defenceless so that they ‘need’ men to protect them. Within this culture, girls are subject to male control from an early age, and girls’ and women’s decisions are made for them by men. This includes their ability to access education.

Cultural, traditional and social practices keep women in the FATA (Federally Administered Tribal Areas) in a highly vulnerable position. Girls’ ability to access education is limited because of Pashtun culture, tradition and ancient practices. Pashtun girls need to get a higher education to secure their future. Pardah is not a complete protection for girls and women. We respect our culture; so our culture should respect us. For girls, education is a form of dowry. It is better to provide girls with the dowry of education than a financial dowry at marriage.

In the Pashtun area, it is already the case that girls receive an inferior education to boys and that families prefer to keep the sexes segregated. Now the Pakistani province of Khyber Pakhtunkhwa (KP) wants to institutionalise this inequality, through banning male entry to girls’ schools. Khyber Pakhtunkhwa’s Chief Minister Mahmood Khan established a complete ban on male entry in all-girls schools across the province, also forbidding male guests at girls’ schools and putting in place a complete ban upon any media coverage at any school events in which girls participate. ‘There should be a complete ban on the male entry in the girls’ schools. Schools should only invite female assembly members and role models as official guests to sports, annual and the other various functions that schools organise throughout the province’, he announced to KP Education Minister Ziaullah Bangash. He stated that inviting men to school events is against the norms and culture of the province and that photographs of girls must not published in newspapers or other media. This act excludes half of the population from being part of the human race.

As a resident of KP, and a Pashtun, it is my opinion that the poor economic conditions of the Tribal Region are not the main reason for the failure to educate girls, but instead that there is no awareness of the need to educate Pashtun women and girls. Even the daughters of the wealthiest families are uneducated. Last year, my niece’s photograph was printed in a local newspaper. She was overjoyed to see herself represented. It made her proud and increased her determination to succeed. For girls in a culture which has long restricted their behaviour, this coverage can be inspirational.

Education for women is important since otherwise they are so often dependent upon men. If circumstances lead a woman to live without a man, she, and possibly her children, will be destitute. She faces the worst possible life, with very little experience to draw upon in order to support herself. If, as a girl, she had gained experience in speaking, living and studying with men and boys, it would be less daunting for her to take care of herself without a man. So providing opportunities for women to experience education or work alongside men provides them with hard and soft skills which they can draw on in the eventuality of having to live as a single woman. This includes sports, which can make girls stronger and more confident, as well as being fun. Girls and boys should be educated together at the same table so that they can learn from each other and break down their fears and prejudices.