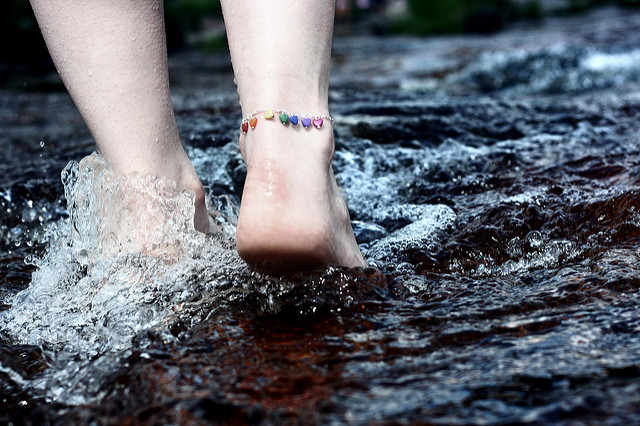 A prison in the mirror

‘Are you ready to jump in the pool?’ asked the girl next door.

It was a warm summer day in July: the sun was shining, the neighbour’s pool was finally inflated and filled with water. I answered with a grin, as any other 12 year old would, and ran inside to change. But what I thought would become another idyllic summer day turned into something completely different. It became a start of a nightmare from which I would not awake for the next 8 years. ‘You’re 12 now, you can’t swim in front of all the neighbours,’ my father said. I ran downstairs furiously to defy him; I jumped in the pool with my clothes on. The only word that stuck with me from the following lecture was ‘honour’.

Honour – a word that leaves a bitter taste in any mouth. Without having been a victim of stringent social control, it is difficult to understand how great a role it plays in one’s everyday life and how ‘honour’ furtively controls how you live. Who can you be seen with out on the street? Which clothes are acceptable to wear in public? What times are honourable to be out of the house? Where is it acceptable to go? What can you eat and drink? The string of all the engrained questions one must ask oneself is infinite, because the consequences of violating the code would be extreme.

For a long time, there has been a vacuum in current debates regarding the problems caused by norms related to ‘honour’. In Norway, Iram Haq’s movie What will people say has been an important introduction to a more nuanced picture of the honour code. While key topics like honour killings, physical abuse and forced deportation to parents’ home countries are subjects of public concern, there is still an overwhelming silence about the psychological abuse and everyday deprivations of liberty which affect far more young women and girls. This lacuna is dangerous and divides our society. The feeling of being an outsider is probably universal to people of immigrant origin, but it becomes complex when there are restrictions placed upon individuals that prevent them from taking part in the wider society.

Social constructivism points to the importance of cultural context in the social formation of norms. When you constantly feel monitored to obey strict norms within a tight-knit minority community, these norms become internalised to one’s own perception of reality. Of course I cannot wear a dress without stockings, or be outside after 10 pm: that is unimaginable. The irony is clear. How do you break loose from a prison that you have locked yourself inside?

As a girl with experience from the Pakistani community in Oslo, I can only draw from my experiences. Important expressions from public spokespersons like Deeyah Khan and Iram Haq in Norway, have finally shed light upon an important issue that often is hidden and treated as a taboo. This is a tangle which is important to unravel, so that we can work for a functional wider society for the next generation. For integration to mean inclusion.

The idea of an idyllic world outside Oslo was the only thing that drove me. A world where I could wake up every day and wear shorts and singlets if I chose to. A world where I could hang out with my male friends publicly, at any time. And not least – a world where I would not jump in terror every time a taxi drove past, in suspense to whether the Pakistani moral police had witnessed some infraction of to the holy code of honour. I dreamt of freedom. It is tragic that I could not find this in Oslo.