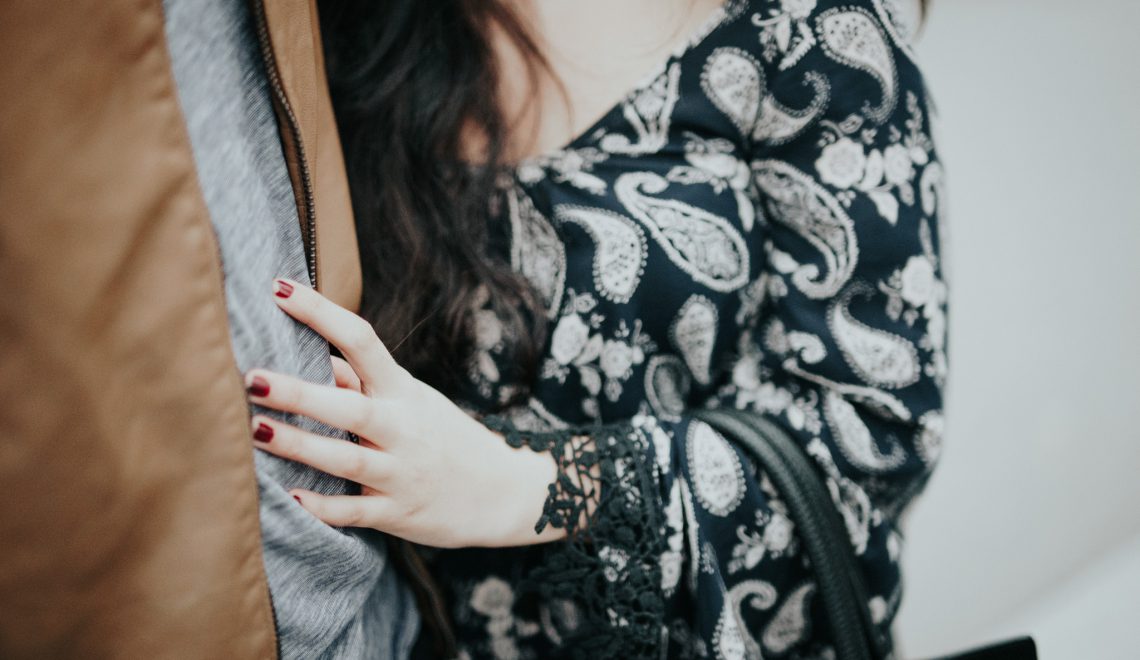 Love on a new continent

I am the companion of the new Adam

Who has earned my self-assured love.

‘Mommy, when are you going to start dating? You’re not even trying!’ complained my nine-year old on a sunny afternoon in February, two days before Valentine’s Day.

We’d just returned home from family day at Chelsea Piers, our cherished Sunday ritual. His words – incongruous in that moment and, certainly so, for his age – struck me with force. I dropped my gym bag, feigned horror. But the horror was as real as if I’d stumbled upon a nest of rodents. I breathed through a rush of emotions – alarm, sadness, mirth, shock.

These emotions suddenly appeared, skittering and scampering, prodded by an innocent question, which penetrated layers of social and cultural conditioning with the precision of an arrow. My son’s words had spilled out, I noticed, in a single breath: question and complaint merged into an astutely observed assessment, delivered with an air of impatience.

I threw my head back and laughed, pinched his chin. ‘Eeeks! Dating? I have zero interest. And, anyway, who has time?’

‘Mom, there are apps, you know, where you can find a boyfriend.’ He was adamant, unwilling to relinquish his position. ‘And that way I can have a stepdad,’ he added, frowning to conceal a tremor of self-consciousness.

This tragi-comic pronouncement in the elevator ride up to our apartment rapidly mounted into an existential crisis – I felt the urge to double over in reams of chronic laughter, I wanted to curl myself into a ball and weep, all at the same time. Instead I joked. ‘Hey, mister, how come you know about dating apps?’

The ground beneath my feet felt like quicksand. The mellow passage of domestic stability was suddenly under threat with the possibility of the new order that my son’s unsolicited and precocious ‘advice’ had raised. Stendhal’s words popped into my mind: ‘The most surprising thing of all about love is the first step, the violence of the change that takes place in a man’s mind.’ Presumably a woman’s mind too. And I – comfortably ensconced in my routines of freedom and independence desired no disruption, thank you. Motherhood is a gift I cherish; it has also, naturally, been my compass. But my child had now inadvertently made lucid the fact that I’d been occupying this station complacently, with inordinate fealty to an ideal of motherhood that upholds those who are settled in constancy, those spared the volatility and ‘violence’ of new love – married mothers.

In the Islamic tradition, mothers are conferred with a near-saintly status – in no small part due to the constancy and devotion they direct towards their children, spouse, the stability of the home; the harmonious links they foster with neighbors and community. ‘Heaven lies at the feet of the mother,’ declared Prophet Mohammed. If I were to create a cameo of motherhood, my first impulse would be to conjure an idyll: a quiet, sun-drenched beach, a woman wading in calm waters, holding her child’s hand, secure in the knowledge that they are protected. Somewhere in the frame, even if not in direct view, there is someone else who completes them, seals the family unit. This, of course, is a fantasy: the how-it-ought-to-be according to tradition and social expectations versus the reality of what-is. A chasm of mythic proportion spans the extremes.

A myriad of subliminal narratives and messages accompany my newly-minted liberation as a single woman. I align myself with liberal feminism. And yet, frequently, I find myself operating according to inherited mores, entangled and rooted in my subconscious, that belong to another era and another place. My son, unburdened with history, views things differently. Whereas I imagine a placid beach, he feels the powerful undertow and rides the crashing waves. He derides the ghostly presence I’ve conjured in my cameo and expects – no – demands his mother find a new partner, a true presence, rather than orienting herself around a mythology.

What triggered this moment of reckoning was our Juno ride back from the gym that Sunday afternoon. The driver, a young man from Guyana, sporting a faux-fur ushanka and large sunglasses, had, for a good part of the ride, been on speaker phone with his six-year old daughter. His lilting voice and the intimacy of the conversation had enthralled us. My son and I exchanged glances and smiled as the driver announced to his daughter that he was planning a surprise for their time together the following weekend. He was first going to give her the mini iPad he’d purchased, then he was going to take her to Build-a-Bear and then, finally, there would be the big surprise. ‘What’s the surprise, Daddy?’ she demanded.

‘You’re a good father,’ I said when he got off the phone.

‘I love my daughter more than life,’ he said, divulging a broken marriage. ‘I gave her mother the house, the car… I never cheated on her. But she wanted to end it. You know, there’s a quote in the Bible, in Corinthians: if love ends it was never love to begin with.’

When we got to our building and disembarked, he removed his sunglasses and turning to my son with smiling green eyes, said, ‘Hey, I like your shoes! I got the same ones.’

‘Mom, why didn’t you take his number?’ my son demanded as I slid the key into the front door.

‘Why would I take his number, sweetheart?’

‘Because he looks really cute! And I think he’s your type!’

Recently, my son went away on a school trip, his first time away. An extended stillness descended upon my home. As I sat in my living room in the silence one evening, I recalled my son’s impatience back in February when I’d dismissed his question about relationships, witnessed his disappointment that I hadn’t ‘taken the (Juno driver’s) phone number.’ As the evening light filled the room and the clanking of delivery trucks on the cobbled street below faded, the thought entered my mind – what a perfect moment for love. And then I smiled. I had ferried my way to the other side of the river. What kind of woman am I in love, I wondered? I understood myself as a mother, but I hadn’t given much consideration to myself as a lover. I basked in the deepening quiet, enjoying my solitude, imagining love’s journey.

‘The ideal breeding-ground for love is the boredom of solitude…’ declared Stendhal. But what if solitude is a rare, bejeweled crown, a joyful novelty? When you’ve spent a quarter of a century married, have inhabited that ‘condition’ longer than you’ve been single – those single years encompassing the years of childhood and adolescence – then it is impossible not to revel in solitude. ‘A whirling waltz in a drawing-room lit by a thousand candles will set young hearts afire, banish shyness, bring a new awareness of strength, and in the end give the courage to love’ Stendhal says. But this old heart, at two score and five years, has passed that phase, can’t be bothered with learning the modern-day waltz of love’s play – the etiquette of ‘dating’ that she skipped in her youth when she dove headlong into (arranged) marriage.

Now, with an unbounded sky of possibility before me, did I possess, in Stendhal’s words, the courage to love? I tried to summon women characters whom I admire, female lovers in traditional literature and lore who might light the way. I found myself facing a conundrum. Rabia of Basra, the eighth century mystic, who hovered in the air over her prayer mat, came to mind first for the grandeur of her love. She is said to have run through Basra with a bucket of water in one hand and a torch in the other. When questioned, she replied: ‘I want to pour water into hell and set paradise on fire so that these two veils disappear and nobody shall any longer worship God out of a fear of hell or a hope of heaven, but solely for the sake of his Eternal beauty.’ She rejected all earthly ties, including marriage, for the sake of her one great love. I thought of Zulaykha next, overpowered by passionate love and longing for Yousuf, who was so handsome that Prophet Mohammed said that he ‘was given half of all beauty.’ Zulaykha suffers terribly as Yousuf rejects her overtures. But she endures the suffering, repents for her betrayal of Yousuf, remaining constant in love despite terrible hardships. Years later, she is rewarded for her constancy and devotion and united with her beloved. They say that her nafs, or ego, which incited her to seduce, is the very engine that set into motion an inner struggle that transported Zulaykha to a higher state of spiritual attainment.

Rabia, the pious mystic, and Zulaykha, the beautiful ‘temptress’, symbolize the polar extremes of saint and sinner, dramatic identities that to this day continue to be imposed on and inflect women’s lives in traditional societies. Women are a source of fitna – social anarchy and sexual aggression according to conservative thinkers. An unmarried woman especially is a potential seductress: a destabilizing influence. These distorted messages, passed down through the generations, whisper subliminally.

I think of the elaborate rituals that preceded my Pakistani wedding, palms adorned with henna that faded all too soon. I have a faint memory of that girl. And when I think of her, I am reminded of Kishwar Naheed’s poem, Who Am I?

I am the one you hid beneath

The weight of tradition

For you never knew

Traded so well on my motherhood and fidelity

Now the season for flowers to bloom in our laps and minds is here.

So much easier to have ‘fallen from grace’ and gained freedom on a faraway continent, in an irreverent city like New York.

Here it is possible to create a new definition of love like the poet Kamla Das insisted on fashioning her own language:

Every one of you? Why not let me speak in

Becomes mine, its distortions, its queernesses

All mine, mine alone.

Nothing quite like the earthquake of emotions that a child’s heart-spoken wish can trigger. Nothing quite like a precocious ten-year old telling his Pakistani mother that she needs to start ‘dating’ already. Somewhere between sinner, saint and goddess, I am fashioning myself anew.

This post was originally published on 3 Quarks Daily and has been reproduced with permission.

Humera Afridi's roots lie in the land of the Sufis—Pakistan—whose tolerant and pluralistic culture has been challenged in recent times. Humera's writing has appeared in several publications, including Granta, Guernica, The Journal of Postcolonial Studies and the New York Times. Her essays and stories are included in the anthologies And the World Changed (Feminist Press 2008); 110 Stories. New York Writes After September 11 (NYU Press, 2002), and Leaving Home (Oxford University Press, 2001). Humera was a writer for The New York Women's Foundation, a community philanthropy working to achieve sustained economic security and justice for women and girls. She is currently a Muslim Communities Fellow at Asian American Writers Workshop and a Monday columnist at 3 Quarks Daily.