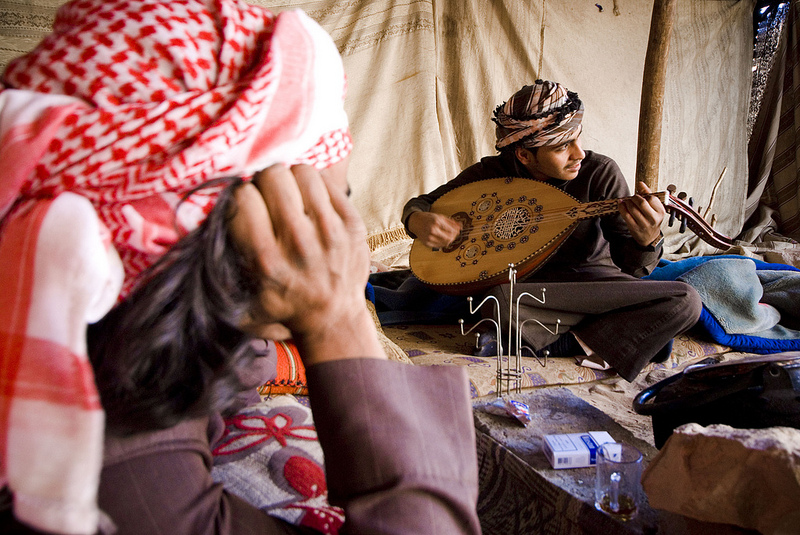 Apart from its military activities on the ground and hard attempts for state building, Daesh has another face: its various cultural activities. An important part of Daesh’s cultural power is propaganda as a form psychological warfare. Through diverse types of propaganda, Daesh unites its forces and supporters, disseminates its ideology and creates an acceptable identity for its supporters all around the world. In this article, I will write about one aspect of its cultural activities: the role of music.

As music is a controversial and challenging topic within many Muslim societies, Muslim scholars and Islamic organisations, especially Salafi groups, maybe this topic will seem strange for you, the reader, and cause you to ask yourself whether it is possible for a Salafi-Takfiri group such as Daesh to use music in their activities. My answer would be yes, and no.

Daesh has been trying to impose its radical lifestyle into its territories. Similar to other Salafi organisations, no music in the Western or the Eastern forms is acceptable. In the first few months of establishment Daesh started imposing different restrictions in the provinces under its control. One of these limitations regarded music.

In one of its statements in 2014, Daesh ‘banned music and songs in cars, at parties, in shops and in public…’ and stressed that, ‘songs and music are forbidden in Islam, as they prevent one from the remembrance of God and the Koran and are a temptation and corruption of the heart,’ adding, ‘whoever violates these rules will subject themselves to the necessary Sharia punishment’. Furthermore, Daesh’s forces (hesbah) seized, burned and destroyed musical instruments, including drums and saxophones in the areas under its control, stating that these instruments did not fit with Sharia law or tradition. They consider these instruments to be un-Islamic and Satanic.

Another example of Daesh’s approach to music is the story of Ayham Hussein, a 15-year-old boy who was beheaded in 2016 for listening to Western music on a portable CD player in Mosul. A spokesman for the Nineveh media centre stated that: ‘Ayham Hussein was captured by the jihadis while listening to pop music at the grocery store of his father in the Nabi Younis marketplace in western Mosul’.

Daesh’s activities against music have not been limited to its territory. One of the reasons why Daesh might have targeted Le Bataclan concert hall in Paris is because it hosted an American band, Eagles of Death Metal. According to its statement, it was a place ‘where hundreds of apostates had gathered in a profligate prostitution party.’‘

But there is another aspect in its activities. War for Daesh includes cultural war. Nasheed, as a cultural product, is one of its tools to win the cultural battle.

Daesh’s nasheeds are not new phenomena, nor are they new within Salafi movements. The history of the nasheed begins in the late 1970s and early 1980s. In nasheeds, there are no musical instruments used, and their lyrics are completely Islamic. Nasheeds are influential tools to mobilise, encourage, recruit, propagandise, and indoctrinate people. In the case of Daesh, nasheeds reﬂect Daesh’s ideology, mainly emphasising the reestablishment of the Islamic khilafah, and returning honour and dignity to the Islamic umma.

Nasheeds share Daesh’s beliefs, mottos and goals. Most of them are melodic, sensational and energising, and contain political and ideological content. Almost all nasheeds are a cappella and aim to inspire the ‘Muslims’ and demoralise their enemies.

Like other successful music, a good nasheed can spread widely beyond borders and capture an audience’s attention, far more than any article, statement, interview, speech or book. These hymns are especially inspiring to young people as a means of targeting their hearts, minds and souls. These songs are as important as much as the other cultural activities in media, mosques, and schools which are used to spread Daesh’s ideology, in order to create a common identity and to mobilise new recruits. Daesh’s nasheeds are distributed via different social media platforms as audio and video files. They are released through the Ajnad media foundation, the musical branch of Daesh. Daesh uses nasheeds as an influential tool at various occasions, such as during its military parades, its ceremonies (such as the ‘caliphate establishment’ in Raqqa), and in its videos.

For example, ‘Dawlat al-Islam Qamat’, which was released online in December 2013, has been considered as one of Daesh’s ‘greatest hits’. Some Western scholars even regard it as Daesh’s official anthem. The comments under this song (and other nasheeds), describe them as catchy, haunting and awe-inspiring.

The singer begins with these lyrics:

My Ummah, dawn has appeared, so await the expected victory.

The Islamic State has arisen by the blood of the righteous…

My Ummah, accept the good news, and don’t despair: victory is near.

The Islamic State has arisen and the dreaded might has begun.

Another famous nasheed is Saleel al-Sawarim which emphasises martyrdom and waging war on the enemy:

Clashing of the swords: a nasheed of the defiant.

So amidst an assault, tyranny is destroyed.

And concealment of the voice results in the beauty of the echo.

As I mentioned before, all videos are accompanied by nasheeds. For example, after Daseh released a video of the Jordanian pilot Moaz al-Kasasbeh being burned alive, a new nasheed, ‘Soon, Soon’ was released, which accompanied the execution. In this hymn, the singer sings:

To destroy you, my sword has been sharpened.

We have marched by night, to cut and slaughter,

By the knife of revenge is a road for whoever is suitable,

With the spectres of night and the young men of terror,

And an explosion of woe, that he may be defeated.

You have begun to fight me with the ally of error, so taste my curse when it has fired up…

Jamileh Kadivar is a freelance journalist and researcher. She holds her PhD in Political Science from the University of Tehran. She has a particular interest in media, politics and international relations, especially Middle Eastern affairs.