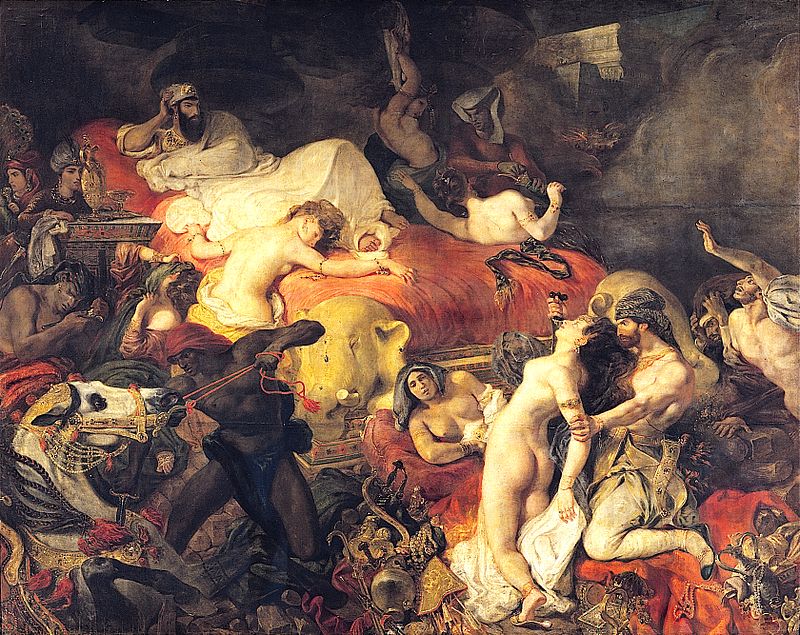 It is 2017, but it might as well be 1827 or the VIIth century BCE for that matter. Visions of the Middle East and Muslims in general have changed little…

We are still the battling hordes, using women as slaves and delighting in the joys of bright coloured outfits. Am I exaggerating? Maybe, well, yes, a bit… But frankly look around you.

Hordes from here and there, and everywhere

There are hordes battling each other in Syria, Libya, Kashmir, the Occupied Territories, Afghanistan, Nigeria, and more…

And slavery? Well yes, just look at the actions of Da’esh in Mosul and Raqqa.

As for bright coloured outfits… well yes, in some places, but unfortunately insecurity is pushing more women, as in Iraq and Syria, to wear black to remain discreet and, more importantly in a war zone, unnoticed.

Aside from the Muslim hordes, if you want to name them as such, there are the other ones – sometimes silent, sometimes loud, and most often they are not blamed. Who are they?

They are the weapon suppliers, seemingly with unlimited supplies. They are the ones who can drop the mother of all bombs with no fear of retaliation, notwithstanding the human, environmental and psychological damage. They are the ones who allow Da’esh videos to be streamed in countries where it is most likely to attract the unemployed and depressed youth.

I just came back from a trip to Afghanistan, and as we were getting on the plane, I told myself with tears in my eyes ‘It is broken. It is now completely broken…’ I had not been there in two years, and what I saw almost shattered my heart in a thousand pieces. Only the love of the family kept it all together.

What did I see? I saw the population triple in cities as people escaped from areas coming increasingly under the control of the Taliban and/or Da’esh. I saw cities unable to cope with the influx, as basic necessities slowly broke down. I saw dirt, garbage everywhere, something that I had not seen only two years ago; along with overflowing, open sewage systems and children playing amidst it all.

I saw apprehension in the eyes instead of a welcome. I also saw the unhealthy residues of the consumer society: thick plastic bags now banned in most of Europe, commercials for energy drinks in every corner (perhaps… an alternative to opium and alcohol, but as deadly and addictive), and more.

I saw disorientation as youngsters spend their time watching the unreachable and the skewed through their smartphones, a distorted reality that they can only reach by risking their lives.

What did I feel? I felt uneasiness. I felt a profound lack of civility, something so contrary to Afghan culture. Crimes, petty and not so petty, are up as people put aside their values for the sake of immediate rewards.

I felt fear in the eyes of parents who are afraid to wake up one morning and find that their 18 years old has left for Europe. I felt desperation as well, as people do not know what to think about the seemingly unending stream of bombings anymore, whether they are suicide bombings from Da’esh, the Taliban, or imprecise drones by foreign powers.

Yes, our world continues to see attacking hordes and women being enslaved. I strongly believe that it is time to set our priorities right.

Here if I may, I will be frank. Muslims in the West have a duty to look reality in the eyes. While so much energy is devoted to whether a woman should or should not wear a hijab, and what it may mean, it seems many are falling into the trap of Western stratification and identification. Wear it if you want! Frankly, there are other priorities.

Along with Afghanistan, I also travelled to Iran. When I came back to the West, one of the first questions I was asked was about the hijab and the oppression of women. To set the record straight, in Iran I felt no such oppression. I travelled for two weeks across the country with my eight-year old son, and we were never bothered or irked in any way, quite the contrary. And if wearing a light scarf over one’s head qualifies as oppression, then so be it.

As for Afghanistan, most people have different priorities, and as the situation gets worse, families want protection and a sense of security, not an NGO butting in with ideas about the burqa.

People in Afghanistan, Iraq, Syria and other such places are desperate for hope. Most do not want to leave their country, and yet, given the reality some are willing to take the risk. One does not embark on such a trip if it is more dangerous than staying.

Of course, accommodating immigration policies for refugees in the West should be a priority, but it is not the only one. People have to take in the full picture and see that quieting the hordes can only come from a global will, and not scattered decisions. One can advocate sensible immigration policies, but one should also call for an end to arm exports and demand transparency on military operations. And the latter must go hand in hand with a demystification of military glory, which for me is a sine qua non to peace.

I really do not know how to conclude. I guess like you, I have more questions than answers. Yet, an image remains in my mind that I would like to share.

Every day, I walked throughout Mazar-e-Sharif in Afghanistan for long hours. I exchanged some smiles, I felt the oppression of hopelessness and smelled that scent of desperation I had smelled in the past in places wrecked by war and poverty.

And once, just once, everything seemed to melt away as the wind brought the scent of flowering almond trees. At that very moment, I looked up at the immense sky and saw thousands of birds migrating North. From their height, they seemed to tell us to let go and be free, and to shed our pointless wars and self-centeredness.

Note regarding the painting: Sardanapalus was an Assyrian King in Nineveh (today in Iraq). He lived in the VIIth century BCE and was the brother of the almighty Assurbanipal (also known as Shamash Shum Oukin), who ordered him to govern Babylon. But following a popular uprising against Assurbanipal, Sardanapalus decided to lead the revolt against his brother who retaliated by laying siege to Babylon. Seeing that defeat was inevitable, Sardanapalus decided to commit suicide along with his wives and horses, while burning all of his precious possessions and the royal palace.