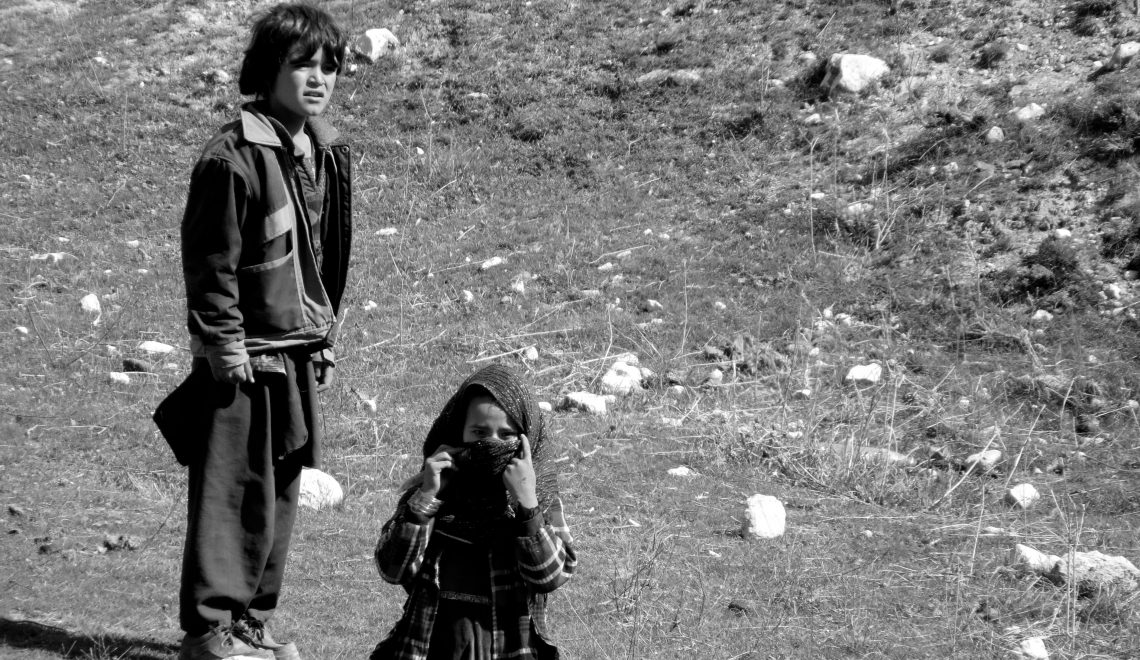 In a small village of Sar-e Pol Province in northern Afghanistan, lives a most gentle and quiet man: Kaka (Uncle) Karim.

A river passes through the village, sometimes quiet, sometimes tumultuous, a reflection of the country’s history. The village has a small school, which is a privilege in that region. Children walk for as long as three hours every morning to reach it from other villages. But when the rains come, and when the winter snow melts, swelling the river, most children cannot get to it. There is no solid bridge across the river, only small makeshift planks that regularly get washed away. Years of conflict have set official priorities elsewhere.

Kaka Karim is indeed a gentle and quiet man. He has worked his fields most of his life, throughout all the turbulent years of strife, taking care of his small herd of goats. A loving family surrounds him, mostly made up of women. Many of the men have died at the hands of whoever was involved in intermittent combat across all this time: from fighting the Soviets, to the ISAF soldiers, going through the Taliban, and others, still today.

Kaka Karim is a pious man. From the time his first son died during the civil war which followed the withdrawal of the Soviet Union, he has set aside a little bit of money every week. His dream was to go to Hajj, to be with other Muslims in the worship of God in that most holy of sites.

Kaka Karim commands great respect for his wisdom, and his kind approach to life. He is one of the few literate people in his village, and is often called upon to settle disputes among family members, or where the ownership of a parcel of land is in question. He has been a constant anchor of serenity in the village amidst the tumultuous years of war.

Last year, he turned 68 years old, and he had saved enough money to go to Hajj: $8,500, an enormous amount by any standards, especially in Afghanistan. He contacted a friend in Mazar-e-Sharif, and set to organize his papers to get his passport, a visa to Saudi Arabia, plane tickets and everything else that was required. The process would take about a year to complete, so he started praying early every morning that he would be alive when the time came. He would happy if he died during the pilgrimage, he thought. He just wanted to get there and perform one of the five duties for all Muslims.

One morning, upon returning from one of his multiple trips to Mazar to get his passport – a rather tedious process since all records had long been blown away by the winds of war – a fierce storm greeted him on the way. The rain was lashing; the wind was cold. He sought shelter in a small roadside Kabab restaurant for himself, his nephew and another five passengers of the little van. The road was muddy and slippery; the van could not go forward.

The rain went on for a whole day and a whole night. Finally in the very early morning, the skies cleared up. Thousands of red poppy flowers greeted him as he woke up, happily bending under the sun and light wind. Kaka Karim smiled. He thought it was a good omen.

They all started their journey home, but the mud was thick and stubborn. They had to push the small van several times. As they neared the little village, they saw the devastation. The river had jumped its banks and there was no way they could pass. The only thing left to do was to wait.

While he waited, his clothes almost stiff with mud, his nails dirty, and his turban askew, his mind started to wander. He thought about the hardship of this little village burdened by poverty and the hurt of so many years of war. He thought of its simple beauty, surrounded by immense multi-coloured mountains.

Just then, a young boy and his younger sister showed up. They sat not far from him. They were also waiting for the river’s fury to abate so that they may go to school. And he thought how ironic it was that the province’s name was ‘Sar-e Pol’ (the place above the bridge) when they did not even have a decent bridge in his little village. Just then he smiled. Just then Kaka Karim realized the mistake he was making. And he went on smiling, waiting for the river’s water to recede.

A few hours later they could finally cross the river. He arrived home and asked his nephew to go out immediately and call on a village gathering on the small esplanade outside the mosque.

Kaka Karim washed away the mud, changed his clothes and put on a clean turban. Impeccable and with a smile on his face he walked to the mosque. From afar you would have sworn he was Nasreddin Hojja! He greeted everyone who had gathered and thanked them for coming. He told them that he would not be going to Hajj.

Disappointment sounded throughout the crowd. ‘How can you?’ ‘So wise, so pious, how could you?’ ‘You would be bringing back blessings for the entire village!’ ‘Who will bring Zam Zam water to sooth our aches and pains?’ exclaimed the villagers.

‘Thank you. Thank you all,’ Kaka Karim answered gently quieting the crowd.

‘Hajj is a voyage, a voyage towards our heart, towards the sublime. There is no need to take an airplane to get to it. The heart is right here, where I am, where you are. So I have decided to use the money to build a bridge for the village. It will help children go to school and have a brighter future. It will help travellers reach our village and bring their goods to us, and for us to sell ours to them. It will open the village to all and it will open our hearts. All I ask from you is that you all participate in building it. We will call upon engineers and experts, but your help will be required to make certain the bridge stands.’

The crowd remained silent. Then cries of ‘Allah u-Akbar!’ rang out here and there, followed by laughter and tears.

The bridge was built in less than three months. Now children can finally attend school regularly and as gently as Kaka Karim’s smile, hope has been rekindled no matter the continued strife, no matter the poverty.