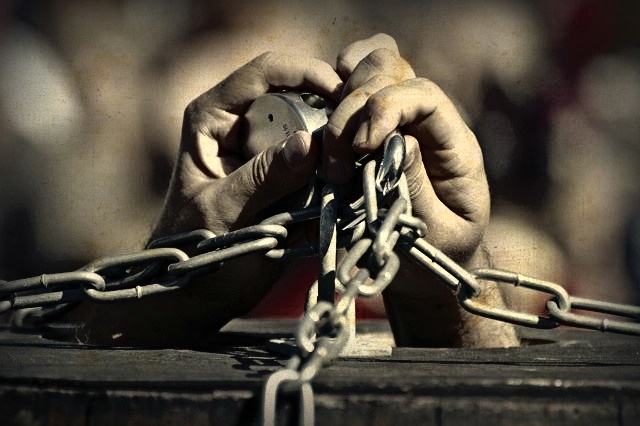 A shackled piece of humanity

I do not know if any of you share my feelings, but I find no serenity when I read about issues related to the Muslim world. Aside from some poetry, most of the ideas and arguments presented seem to stir controversy or violence.

The news that comes out of Yemen, Libya, Syria, Palestine, Nigeria and Afghanistan is blatantly not serene. And these are the few that sometimes make it to the headlines. In the Democratic Republic of Congo, South Sudan, southern Philippines and many other places, conflicts are brutal and yet raise few, if any, eyebrows.

There is war in the harshest sense: displacement, loss and pain. There are children being killed indiscriminately by airstrikes, civilians targeted, hospitals destroyed and more: all against the very principles of humanitarianism. The images, and just thinking about the suffering, make us cry. Along with this, the discourse of the powerful is filled with strife and harshness. There are few, if any, proposals for peace, and most fail to get out of their warmonger’s mindset.

The writings about Muslim women are also far from being serene. I very rarely get to read something where a Muslim woman actually affirms herself without dismissing others or insisting on her own way of seeing things. Whether it be mundane topics such as the hijab, or more fundamental ones such as the right to live without violence, I encounter very few words that are couched in conciliatory language or that do not stir even more controversy.

True – the situation is dire at so many levels, with war-torn countries, rejected refugees, discrimination within the Muslim world and outside, and an increasingly intolerant discourse among intellectuals and even the general population. There is racism and there is violence.

The situation is of course unacceptable and no one should settle for any of it. Me, you, all of us must talk, must write, must work to change things so that women can achieve their fundamental rights, so that Muslims in general get out of this abhorrent situation, and that wars affecting all of us may come to an end. All this may seem totally utopian today, but it is achievable. I am convinced.

What I fail to see is any discourse that actually invites fruitful exchanges upon which change can be constructed. I fail to see proposals anchored in serenity and conducive to sensible and purposeful action. Wars cannot stop if we do not change our language and if we fail to consider the other side. In the same way, women’s conditions will not improve if the discourse remains aggressive and stubborn.

I know there are big powers and big money behind many of the events, including a millennium and a half of tradition which is not exactly anchored in serenity either. I know also that many among us who hold a non-violent approach are invariably pushed aside. Just look at the efforts made in Palestine and elsewhere.

Perhaps it is simply the reality of our times. Look at the world, read the news and social media, and you will see for yourself that between the fake news and the free-for-all, there is not much room left for constructive discussion. Even in public forums, it is difficult to have a calm conversation about any topic related to the Muslim world. Everything suddenly takes on the hues of controversy: my idea versus yours, my belief versus yours and worse yet my God versus yours. It is disheartening, especially when such conversations take place within the supposedly objective confines of academia or between intellectuals.

Maybe it is time to take a step back. Maybe it is time for some silence and for taking the time to actually listen to ourselves. Yes, there are life and death issues, there are girls being subjected to violence, there are women who cannot even hope to improve their lives, there is famine and there is war. But we can do better than repeat the pattern of strife in our words.

We can bring some serenity when we write and talk. This goes for a humble writer such as myself, but equally for intellectuals, experts and those in positions of power.  If not, we are bound to remain a shackled piece of humanity that cannot remain tranquil long enough to realize it can actually gently slip its hands out of its chains.