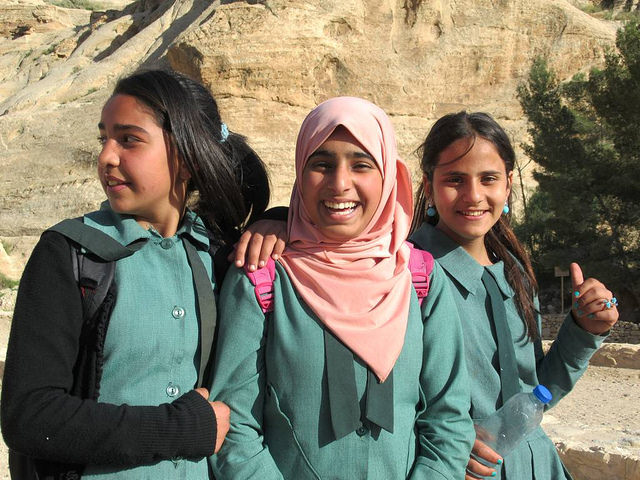 Child marriage remains a worldwide problem, mainly affecting girls. It needs to be addressed: it can lead to a lifetime of damage. In March 2018, UNICEF provided the disturbing and alarming figure that more than 650 million women alive today were married as children. Around 12 million girls under the age of 18 are married each year.

UNICEF also stated that girls who marry before they turn 18 are less likely to remain in school, and are more likely to experience domestic violence. Young teenage girls are more likely to die due to complications in pregnancy and childbirth than women in their 20s and their infants are more likely to be stillborn or die in the first month of life. The UN organisation describes child marriage as a ‘strategy for economic survival as families marry off their daughters at an early age to reduce their economic burden during times of stability and in crisis.’

Here in Jordan, and despite recent advancements in demands related to women’s equality, child marriage remains a big concern for the women’s movement. By law, sharia court judges are able to marry young girls through making exceptions if the groom is considered ‘competent,’ even though the legal age of marriage in Jordan is 18 for men and women.

There are around 80,000 marriages in Jordan per year. 10,900 of these involve girls who are between the ages of 15 and 18. In other words, there are around 30 girls under the age of 18 married every day in Jordan. Every year, startling figures for early marriage are being documented. Several local women’s organizations have been addressing this topic for the past few years. Their demand is simple: eradicate the exceptions listed in the provision of the Civil Status Law that permit the marriage of girls between the ages of 15 to 18.

The Sisterhood is Global Institute (SIGI) is one of the organizations that engage with this topic. SIGI has recently launched a national campaign called ‘Nujoud’ to eradicate child marriage in Jordan. The name Nujoud refers to the story of a Yemeni girl who resisted her early marriage, becoming the youngest girl to be divorced, at the age of just 10 years old. She had experienced physical and sexual abuse during her two-month marriage.

SIGI’s President Inaam Asha described early marriage of girls as a form of domestic ‘detention and rape,’ since Jordanian law punishes individuals who engage in sexual activities with minors. Asha added that there is a connection between early marriage and leaving education amongst girls in Jordan even though the regulation stipulates that if a girl is still in school then marriage should not lead to her dropping out.

The exceptions to the rule that marriage partners should be 18 or over are stipulations that there be a maximum age difference of 15 years between the husband and the wife, and a requirement that the marriage be in the couple’s ‘best interest’ and ‘for the benefit of the girl.’ The regulations also stipulate that the newlyweds should present a certificate confirming that they have both attended a workshop on marriage beforehand which is organized by the Iftaa Department.

Activists have criticized the exception for its ambiguity and for failing to explain the nature of ‘benefit.’ The provisions also fail to mention what kind of sanctions are available in the event that a judge does not abide by the law and what level of education a married girl should be able to access.

Adding to these ambiguities, I believe that Jordanian laws are selective when it comes to identifying who, exactly, is a child. While laws identify children as individuals who are under the age of 18, the law indirectly regards girls who are under 18 as responsible adult individuals when it comes to making major decisions such as marriage and having children. If girls violate certain societal codes such as ‘tarnishing the honour of their families,’ then the law treats them as adults who are fully responsible for their actions.

It is essential for activists around the world to fight the phenomena of early marriage so as to protect children and allow them to enjoy a healthy childhood. Allowing marriage for girls under 18 is effectively stealing the childhood of both girls and boys. This surely needs to be reconsidered in Jordan and elsewhere in the world.