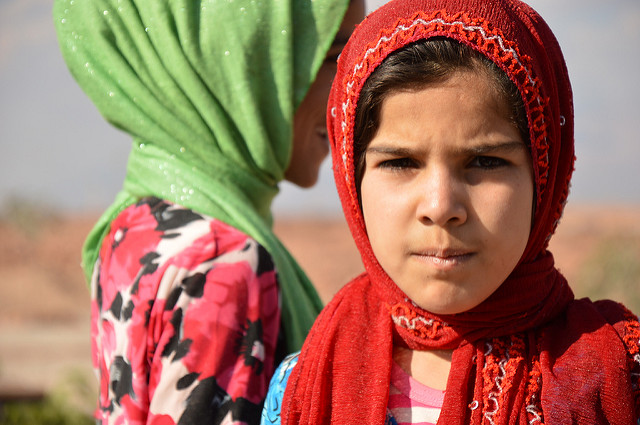 Talk to your children about refugees

Yes. Talk to them.

But before, please, read about them, inform yourself through different media outlets and primary sources. Then talk.

Explain. Go in depth, depending on the questions and the age of your children, or search for more information together.

Look at a map together. Look up where many of them come from and talk about the millenary history of Syria, about the gifts of language and science Iraq gave to the world.

Talk about Yemen being the cradle of the Arabs, where high rises were built long before Manhattan even existed.

Talk about the beauty of the recorded dialogues between the Sufis and Buddhist Monks in Arakan in the XVth century, many carried West and deep into Asia from the Bay of Bengal’s coast by Arab and Chinese merchants.

Talk about the custom of gift-giving in Central Africa, and the gold that kings on the continent’s West Coast used to wear. Talk about the ancient libraries of Timbuktu and of musk from Somalia.

Explain how the Kingdom of Bactria ruled many millenniums ago, and how the lapis lazuli from the same region of Afghanistan was used by Leonardo de Vinci to colour the Virgin’s clothes in many of his paintings.

Make them see that these refugees carry with them millenary cultures, and that their tattered clothes do not reflect who they are.

Talk about the reasons of them leaving, about the suffering and the anguish, about the brutality and the desperation. Again, of course, measure your words depending on the age of the child.

Explain that none of the refugees would ever have left if they had felt safe where they were. Tell them that a mother would never ever risk the life of her child if she knew he would be safer at home rather than on a small boat crossing the Mediterranean Sea.

Talk to your children so that they know it is happening. It will make them aware of the fact that refugees are human beings with dreams of a better future, and that they deserve one, just like anyone else on this earth. By putting a real human face on them, it will also help avoid any prejudice that may arise.

Talk to your children about the hardships yes, but most of all, talk to them about compassion.

Explain how people are helping on the ground in conflict zones and upon their arrival as refugees. Talk to them about all the organizations, the tent hospitals and the camps for the displaced. About the rescue boats crisscrossing the Mediterranean Sea looking for refugees in distress.

Tell them about what humanitarian workers do, and how most of them wish they could do more to alleviate the suffering of the people they are helping. Tell them about the many people who are raising their voices through any means possible so that these refugees may find a safe place.

It is important that they know that in this world there is generosity.

I remember the Vietnam War and then Cambodia as part of my sheltered childhood in Paris. I was very young then, but names still resonate in my ears: Norodum Sihanouk, Pol Pot, Kissinger, the Ho Chi Minh trail, Saigon, Phnom Pen, Laos, the Vietcong, Le Duc Tho, and more.

And I remember the images of the boat people on television. My mother had France Inter on the radio in the morning while we had breakfast, and we watched the 8 o’clock news on the Première Chaîne at the time.

The names, the images, the hardship, the children crying, the people’s desperate pleas on little boats… I remember it all and I think it partly shaped my way of thinking. How can it happen? How can I make sure it never happens again? How can I help?

These are the questions I asked myself at the time. I was very young, barely five years old in 1970, but it did not mean I was not aware.

So talk to your children. It will make them fully aware that life is indeed very large and encompasses many things, including brutality and magnificence. And with this awareness in their heart, they will crave a future where human dignity is at its core, a world free of wars.

It starts small and it grows big, and for many of us, the only means at our disposal is to help our children take that first step.

Trust me when I say they will understand; or better yet, trust them.